Popular known as Flicker Singh in Indian Hockey, Sandeep Singh has a comeback story like none other. Portrayed by Diljit Dosanjh in the movie Soorma which is based on Singh’s life, a lot of factors came into the journey of Sandeep Singh from humble beginnings to holding the position of Sports Minister of Haryana today.

Singh’s initial fascination wasn’t with the sport in the first place. It started by feeling jealous over his brother Bikramjeet Singh’s kit and hockey gear. After pleading to his mother Daljit Kaur Singh, she agreed to get him his own kit and gear if he starts playing hockey. This initial fascination for the hockey gear turned into his debut for the Indian national hockey team in 2003 for the Junior world cup held in Karachi. This was Singh’s defining moment by scoring the highest number of goals in the entire tournament – 12 goals, which was the first time India secured the cup in its history. It was also his first steps towards becoming the best drag flicker in Indian hockey. He was later selected for the 2004 Athens Olympics, being the youngest member of the Indian hockey team who got selected by national selectors after witnessing his impressive skills in the Sultan Azlan Shah Cup.

His impressive streak continued until an incident at the age of 20 that changed him forever. Singh was on a journey from Chandigarh to Delhi by the Shatabdi express, a train that was frequented by politicians and other important personalities which automatically resulted in travel of armed guards. An RPF officer seated behind his compartment accidentally pulled the trigger while cleaning his rifle which rendered Sandeep in a coma for days. This bullet resulted in damage to his spine, kidney and other organs which resulted in drastic weight loss. Willing to change his mental attitude to being positive, he called his brother for a hockey stick so he could sleep with it. Bikramjeet Singh was stated as one of the major motivational factors for Sandeep’s recovery. 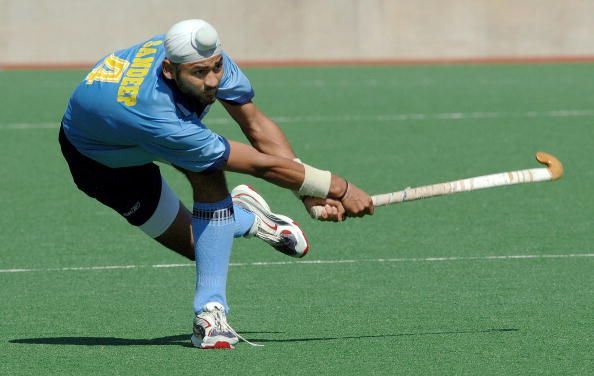 After being discharged from the hospital, the Indian Hockey Federation covered costs for Sandeep Singh’s physical rehabilitation in Netherlands. Sandeep trained rigorously for nine months to make a comeback that would leave everyone impressed. He was in a wheelchair for six months but his brother’s inspiring words kept him going. His determination and grit saw a comeback in the 2008 Azlan Shah Cup for the entire country as he scored nine goals which bought India in the finals after 12 years.

His main objective later was to keep pushing for India’s Olympic dream by turning captain and qualifying for the 2012 London Olympics, but sadly Team India couldn’t perform as expected.

Since his journey in hockey, Sandeep Singh now holds a DSP rank in Haryana. He made his debut in politics when Bharatiya Janata Party approached him and he contested in the assembly elections. This resulted in his victory of becoming and MLA and the sports minister of Haryana which has allowed him to bring many necessary reforms in Indian hockey including female coaches for the women’s team, increase in allowance for sportspersons and a structured system of applying for leave for coaches.

To once think that a boy from a small town called Shahabad in Haryana would become one of India’s best talents in hockey and later the sports minister is an inspiration that many hockey players today look up to. Sandeep Singh’s story is nothing short of grit, dedication, discipline and passion for hockey.