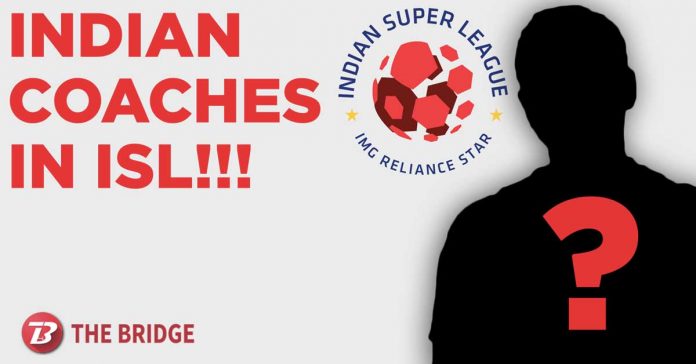 Indian football is set to see a lot of changes come the 2020-21 season. For one, any coach with a Pro Coaching Licence can take charge of any franchise from the upcoming season, clearing the path for Indians to be appointed as head coaches in the Indian Super League (ISL).

As such, although the demand for foreign coaches is quite high, for the first time, we might see an Indian at the helm in the ISL. There could be as many as eight clubs looking for new coaches ahead of the new season.

At the moment there are 15 coaches who hold Pro Licence and hence, are eligible. Here are 5 Indian coaches with pedigree whom ISL clubs should consider for the upcoming season:

A former Indian international, Naushad Moosa has been working at Bengaluru FC as the club’s assistant manager since 2017 and is also the club’s reserve team’s head coach. He has delivered good results with the junior team and has worked alongside Alberto Roca and Carles Cuadrat.

It is unlikely that the JSW-owned club would let go of Moosa even if he has suitors. But if Cuadrat leaves any time soon, then they might be tempted to promote Moosa to head coach instead of going for a foreign high profile name. The young Indian coach, though, is yet to manage a senior side.

It might be a little early but one coach that ISL clubs should consider is Floyd Pinto. The Pro Licence holder has been with the Indian U-20 national team since 2017, at first as a deputy to Luis Norton de Matos before taking charge single-handedly.

Recently, due to India’s below par performance at the AFC qualification, he was released by AIFF as the head coach of the U20 team and the Indian Arrows club team. But Pinto is young, ambitious and a challenge like ISL would only motivate him to give his all.

Former Gokulam Kerala manager Bino George would be the right man for so many clubs in the ISL. The footballer-turned-manager first came into the limelight for leading Gokulam Kerala’s mission of giant-killing in Indian football.

George has been credited for the development of several Indian players, especially from Kerala and is known to groom young talents.His tenacity of playing possession-based football will also go along well with several clubs. Kerala Blasters could have been his perfect home but the Kochi-based club have reportedly onboarded Kibu Vicuna as the head coach, so we have to wait and see.

Khalid Jamil should be one of the first names when Indian coaches are considered. A former I-League winner with Aizawl, the 42-year-old has the experience of coaching big clubs like East Bengal and Mohun Bagan.

For NorthEast United, it would make perfect sense to continue with Khalid Jamil as their permanent boss in the upcoming season. He has been at the club for some time, he has managed the senior team in two matches, no one knows the North East belt better than him, and he is a manager with proven calibre.

This man, of course, already has been there. Since Sergio Lobera was fired, Derrick Perreira had taken charge of the FC Goa team alongside Clifford Miranda. And barring the semifinal in Chennai, his team have performed quite well. Amidst troubling times, he managed to settle a dressing room and maintain a winning run to secure the AFC Champions League spot.

Now, Goa might be tempted to go for a foreign coach, especially with several high profile coaches, including Guus Hiddink, Sven Goran Eriksson, Dunga, reportedly showing keen interest in the job. But if any club believes in it’s own system, it is Goa and that is why there is a chance that we will see Derrick and Clifford in the Goa dugout next season.

As per a press release issued by the All India Football Federation (AIFF), Bengaluru FC, who finished third in the Indian Super League (ISL)...
Read more
131,057FansLike
12,136FollowersFollow
7,155FollowersFollow