At Youth Olympics, young shooters prove they are truly “world-class”

The story of India’s performances in multinational tournaments, such as the Olympics, have often been limited to near misses and heartbreaks. Much has been said about the lack of world-class talent representing the nation and also about their abilities to perform at the biggest stage among all.

The shooting contingent gave India a total of two gold medals and two silvers, winning a medal in each of the four events. While Tushar Mane and Mehuli Ghosh grabbed a silver each in the 10m air rifle event; Manu Bhaker and Saurabh Chaudhary brought golden delight with their medals in 10m air pistol event. India topped the medal table in shooting and dominated over traditional giants - China Russia and South Korea.

Also Read: Mehuli Ghosh has learnt to shoot for the stars

However, the true story of India’s success at the Youth Olympics lies in the consistency that these young athletes have shown and also their composure to perform at the biggest stage. India has dominated shooting competitions at the junior level throughout the year; finishing second in the medal tally at the Junior World Cup in Sydney and ending at the top of the table in Suhl. Some of India’s young prodigies have already won medals in the senior category as well.

16-year-old Manu Bhaker began the year by becoming the youngest Indian to win a gold medal in a World Cup when she took gold at the ISSF World Cup in Guadalajara, Mexico. She followed that up with a gold in the Junior World Cup in Sydney and another one at the Commonwealth Games in Gold Coast. Though she could not replicate her medal winning performances in the Asian Games and World Championships in Changwon, she has certainly come back in style at the Youth Olympics. 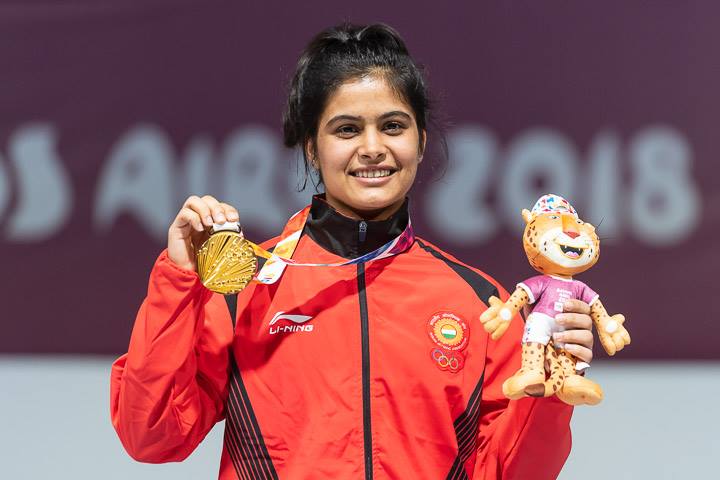 Manu Bhaker with her gold medal during the presentation ceremony of Youth Olympics.

During the qualification stages she topped the competition with an impressive total of 576. Going into the finals she was a clear favourite, and lead the competition from beginning to end to become the first Indian female to win a gold at the Youth Olympics.

Also Read: It's not all a walk in the park for young shooters

The story has been somewhat similar for sixteen year old Saurabh Chaudhary as well. The boy from Uttar Pradesh surprised the nation when he beat the likes of former Olympic Champion, Jin Jong-oh, to a gold in the Asian Games at Jakarta-Palembang. Training under the guidance of former Asian Games gold medalist Jaspal Rana, he is the current world record holder in the Junior category of 10m air pistol finals. What is even more impressive is the fact that his junior world record betters the senior world record by nearly two points. He followed up his gold winning performance at the Asian Games with another gold at the World Championships in Changwon, where he competed in the junior category to train for the upcoming Youth Olympics. The current crop of Indian shooters who have excelled in international competitions is not limited to these four athletes only. The likes of Hriday Hazarika, Elavenil Valarivan, Anish Bhanwala and Yashaswini Deswal have all enjoyed their share of success at the junior levels. Like Saurabh, Elavenil is not only a World Championship medalist but was until recently also a junior world record holder in 10m air rifle event. Fifteen year old Anish Bhanwala impressed at the Commonwealth Games in Gold Coast when he became the youngest Indian to win a gold.

While the athletes and coaches deserve a lot of the credit, the National Rifle Association of India also deserve much praise for the recent success of young Indian shooters at different competitions. Their effort to encourage young athletes to take up the sport has started paying dividends and is reflected in India’s performance in every competition. Traditional stalwarts of the sport – China and South Korea have failed to keep up with India’s young shooters throughout the year.

India’s young shooters are truly world-class; fearless and composed to take on the biggest challenges that lie in front of them. With a number of Tokyo 2020 quota places up for grabs in the World Cups next year, it will be interesting to see if these young shooters could replicate their success at the senior levels as well.
Indian Shooting Jeremy Lalrinnunga Joydeep Karmakar Manu Bhaker Mehuli Ghosh Shooting Tokyo 2020 shooting
Latest Videos
Next Story
Similar Posts
X
X