Saurav Ghosal: I would love to win a few Gold medals at the CWG 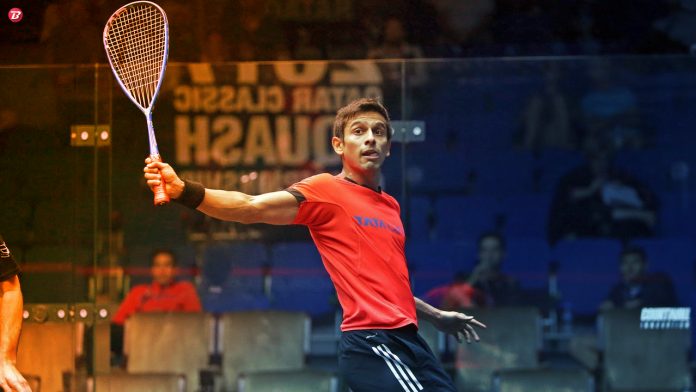 When it comes to squash, Calcutta boy Saurav Ghosal takes the cake for having a long list of firsts to his name. Earlier this week, the squash star moved to number 13 in the world, with only two days left before the Commonwealth Games to begin.

‘It was a dream come true and what made it special was that I played really good squash in that event. Reaching the pinnacle of junior squash was a validation of my belief in myself. It gave me the confidence to aim higher and dream towards replicating the same at the professional level,’ Saurav told  The Bridge.

At the time when Saurav started out on the junior circuit, there was not much that Calcutta had to offer and there wasn’t much for the youngster to do other than following his father.

‘My father used to play and he was the one who initiated me into the sport. He’s the one who introduced me to the game and supports me greatly even today. He taught me the basics and that has helped all through my career,’ he said.

But since then, the squash scene has undergone considerable upliftment across the country and Kolkata has not been much different.

ALSO READ: A podium finish at Commonwealth Games is what the vision is: Harinder Pal Sandhu

Speaking about how much has changed his days as a junior, Saurav said, ‘When I started squash, there was not much happening in terms of a junior program in Kolkata. The landscape has definitely changed since my early days. There are about 100 kids who are part of the Junior Development Program. The next step is to produce high quality players from the program.’

Moving beyond squash at a junior level, since the arrival of Saurav Ghosal on the bigger stage, the sport has had an overall upliftment. From the likes of Velavan Senthilkumar and Abhay Singh who are leaving their junior days behind, to the likes of Joshna, Dipika who both hit no.10 in the past couple of years, Indian squash players have made a mark for themselves on the global stage.

Speaking of this growth, Ghosal said, ‘Since the last 20 years, a lot has changed. When I was young, everyone looked at other nations in awe and there was no belief we could do anything of note at major events.

‘All that has changed now. As a nation, we have become competitive at every level. The next step for us to is to become genuine title contenders at World level events.’

While his father introduced the world of squash to Saurav, Calcutta born squash star does not miss out on the opportunity to acknowledge the support he has received over the years from his family, who have seen him through the good and the bad of a sportsman’s career.

‘My family has been a bedrock all through my career. They have kept me grounded during the highs and given me perspective during the lows. I would not be where I am today without their support. The emotional side of the sport is often underrated and having a solid support system is very important,’ said the world number 13.

ALSO READ: It’s unfortunate that squash is not in the Olympics: Joshna Chinappa

‘Besides family, being my support system and my father getting me involved, there is also looking up to squash idols that helped me keep on going. I loved watching Amr Shabana play. The simplicity with which he dismantled top players was mind boggling. If anyone wants to learn how to play squash, he’s the one to watch,’ said the Asian Games medallist.

Most members of the squash contingent are going beginning their Commonwealth campaign with confidence, having done considerably well over the last couple of seasons. However, in the midst of CWG preparations, India faced a roadblock when the foreign coach of Ashraf el Karargui called it quits with only days left before the Games to begin.

But following the line of Cyrus Poncha, Saurav also displayed an extremely professional attitude regarding the unfortunate incident. He said, ‘It was sad and maybe avoidable. The timing of it was obviously not the best either. However, we are all professional players who play on our own all over the world. We are all focused on doing well at the Gold Coast.’

‘It may have been unfortunate but there is no question of having a break in training due to the development. We all have our individual training plans tailored to make us play our best. Our focus doesn’t change,’ continued a determined Saurav Ghosal.

Optimistic about India’s chances, he added, ‘Hopefully we will win a few medals for India. We must be thankful to Ashraf for the work he did with the players over the last couple of years and use the experience to drive us forward.’

While being grateful to be a TOPS athlete, Saurav also mentioned how unless a systematic approach is developed, a continuous line of successful players would not be achieved. He said, ‘World class expertise needs to be inculcated into the system so that juniors are exposed to that knowledge at an early age. ‘Otherwise, the success of Indian squash will always be dependent on individual brilliance. But a system will ensure the sustainability of India’s sure towards to the top.’

Since 2006, Saurav has brought home a medal every time at the Asian Games, and this year, looking in really good shape, he is hopeful about the 2018 season and is eager to make a change in the medals tally at the Commonwealth Games.

‘I would love to win a few Gold medals at the Commonwealth as well as Asian Games this year. Winning a medals for India is the biggest honour and doing it at these events will make it all the more special. Of course, entering the top 10 of the PSA rankings would be another target,’ mused Saurav.

It is only after Saurav’s success that India even looks at squash as a potential medal winning sport on the Olympic or commonwealth stage. Being the flagbearer of a sport would be quite a pressure task, or so you would think. But Saurav seems to get a kick out of it.

Being the leader of firsts in Indian squash, Saurav happily admitted, ‘I have always wanted to do something that has never been done before. So being a pioneer of sorts is what drives me on and pushes me to work harder. The pressure, if any, is a privilege.’

For him, it is now that the going gets tough. After having established himself, it is now time to stay there for him to have his position validated. ‘Your role changes from the ‘hunter’ to the ‘hunted’. The pressure is different. You need to be one step ahead of everyone in terms of how you play. Getting to the top is always easier than staying there,’ said Saurav Ghosal, hours before the CWG begin.

With the kind of run the squash contingent has had, it is expected that Saurav Ghosal will not have too hard a time validating and maintaining his position at the top. Press Trust of India - Modified date: March 26, 2020
With Tokyo Olympics getting postponed by a year many athletes are worried about their sponsorships as their contracts with their sponsors only go through till 2020.
Read more