On the seventh anniversary of Smriti Mandhana's international debut, The Bridge revisits her five best knocks.

On April 5 2013, a 16-year-old girl from Mumbai made her debut for India. She goes by the name of Smriti Mandhana. In her seven years as an international cricketer, Mandhana has gained reputation as a stylish and aggressive opener.

The 23-year-old is now an Indian regular. But Mandhana's batting exploits has made her play in Indian and foreign T20 leagues. The opener has played for Brisbane Heat Women, Trailblazers and Western Storm.

On the seventh anniversary of Mandhana's international debut, The Bridge looks at her five best innings. On the opening day of the Women's World Cup in 2017, Indian beat hosts England by a comprehensive margin of 35 runs. It was India's first win over England since 2012. On that day at Derby it was India's top-three comprising of Punam Raut, Smriti Mandhana and skipper Mithali Raj that came to the party to help India post a challenging total of 281/3 in 50 overs. While Raut and Raj played measured knocks of 86 and 71 respectively, it was Mandhana's 90 off 72 deliveries that gave the Indian innings much needed momentum.

Mandhana, who was just 20 then, overwhelmed the English attack with her stroke play. The left-hand batter hit 11 boundaries and 2 sixes during her stay in the middle. Those who saw Mandhana bat that day say that their were shades of Sourav Ganguly in style of batting.

What made Mandhana's innings special was that she was coming back from a cruciate ligament tear which she had sustained at the Women's Big Bash League. It is never easy for a sports person to come back from an injury and immediately hit the top form.

Mandhana won the Player of the Match award for efforts. Leading into this match, India and Australia were the only unbeaten sides in Group B of the tournament. The winner of this match would go on and top the group. Naturally the stakes were high.

While the Indian spinners choked the Australian chase, it was Mandhana's demolishing act early in the day that set the tone for the rest of the match. The southpaw punished Australia's erratic bowling smashing nine boundaries and 3 sixes. Mandhana registered her first fifty of the tournament and she did not relent. During the course of her innings she became the second-fastest Indian batter, after Mithali Raj, to 1000 T20 international runs.

Thanks to Mandhana's powerful hits India finished with a strong total of 167/8 in 20 overs. It was then left to Anuja Patil, Poonam Yadav, Radha Yadav and Deepti Sharm to do the rest.

Mandhana yet again walked away with the Player of the Match award. The biggest compliment came from the captain of the opposition camp, as Meg Lanning said that Madhana batted extremely well. 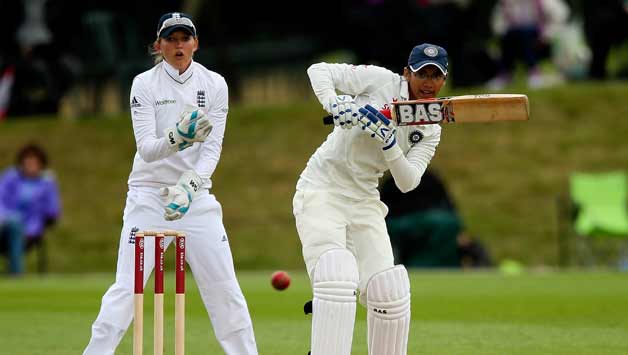 Smriti Mandhana during her 51 (108) vs England, Only Test, India Women tour of England at Wormsley (Image: Getty)

On paper this match was to be a lopsided affair. The gulf in the experience between India and England was massive.

England boasted of an experience of playing Test matches. They were a team which had played two Tests in past 12 months. India had last played a Test in 2006. England had won back to back Women's Ashes. The Indian playing XI consisted of eight players on their Test debut. One of those eight debutants was Mandhana.

The match had its ebbs and flows. Batting first England were skittled out for mere 92. India were then bowled out on 114. The English women batted sensibly in their second innings as they finished with 202, thus setting India a target of 181 to win the match.

While the wickets were tumbling in India's first innings, Mandhana had managed to score a fighting 22 off 67 balls. The time spent in the middle during the first innings helped Mandhana when it came down to chasing a stiff total.

Mandhana was unfazed by anything happening around her. She batted for 132 minutes facing 108 balls and hitting 9 boundaries to notch a fifty of Test debut. With Indian skipper Mithali Raj also notching up a half-century, India crossed the finishing line with six wickets in hand.

Although, Mandhana has become popular for her aggressive stroke play, but on her debut she gave a good account of herself as a Test player to anchor a chase. Mandhana was already enjoying the 2018 edition of the Kia Super League. Before this match her scores read 43*, 52*, 37 and 48. The Indian batter was already the top scorer of the league.

As the other Indian featuring in the match— Harmanpreet Kaur— failed to impress, getting out on a golden duck, Mandhana made the contest all about herself.

Chasing 154 to win, Mandhana launched a brutal attack on the Lancashire Thunder's bowlers. Mandhana's blitzkrieg was studded with with 12 boundaries and four sixes.

Mandhana got a boundary off a ball from Alex Hartley in the match's penultimate over to notch her first T20 century. As India batted first, the opener notched her century hitting 14 boundaries and one six. Mandhana was ably supported by Harmanpreet Kaur and Vedha Krishnamurthy both of who scored a fifty.