The Head coach of the Hyderabad Baseball Club (HBBC), Carlos Mirabal, has been appointed as the director of Confederation of Professional Baseball Softball Clubs in India (CPBSC India) on Monday. Mirabal is a former professional baseball pitcher in the US playing between 1996 and 2008. He played for the Altoona Rail Kings of the North Atlantic League in 1996. From 2000 to 2005, he played for the Nippon-Ham Fighters in Japan’s Nippon Professional Baseball. From 2006 to 2008, he played with the Atlantic League’s Newark Bears winning the league Championship in 2007.

CPBSC India is a non-profit organisation working with the sole objective of promotion and development of baseball and softball in India. It recognises the need for a collaborative and concerted effort to create a professional baseball and softball ecosystem in the country. In order to change the outlook of the sport, CPBSC India would like to bring together all like-minded organisations who share the vision and objective of CPBSC India to work towards a common goal of promotion of baseball and softball. The organisation would like to collaborate with international organizations and create value out of each other's experiences and expertise and thereby benefiting the sporting community in India and around the world.

Speaking on his appointment as the new director, Mirabal said, "I feel like it's a great opportunity to be a part of creating some kind of togetherness for baseball in India." in a conversation with The Bridge. Mirabal brings with him a vast experience from playing in the US to coaching in Europe as well. About his journey, he shares, "My journey has gone from the New York Yankees organisation, when I first started traveling overseas to playing in Taiwan and Japan. I did a small stint in Australia, played in Europe. I also managed and coached a little bit in Germany and Japan as well. So it's taken me around the world. And, it has been a lot of hard work. It takes a lot of effort to make your contribution aware among people who start believing in you." 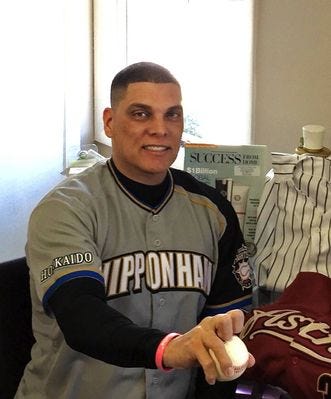 Mirabal closely worked with Mr. Vamsi Krishna Kondreddi, the MD & CEO, of Dream Olympic Sports, the organisation that has been relentlessly working to put Indian baseball on the world map. Dream Olympic Sports is supporting to connect with the sports investor community into the baseball from Japan and Australia, the organization who is instrumental in formulating a baseball league in India, called Premier League Baseball (PLB). "I spoke thoroughly with Mr. Vamsi, who is doing a wonderful job trying to professionalise the sport in India. During the COVID-19 induced lockdown, we spoke more about Indian baseball. We spoke about the vision of growing the sport, making it more popular among children, we also spoke about the possibilities of the baseball league in the country. Through a lot of research, we felt we can get all the amateur federation's within India, to join together on the same page of growing baseball in India. I have my ideas and my visions and, and the passion that I bring to try to unify all the Federation's and just grow the game of baseball for the people of India," he adds.

The biggest need for a confederation like CPBSC India is to unify all the states who are actively taking part in baseball. In every other country, there are sporting bodies who collaborate for the functioning of the sports. "We are trying to unify everybody to trying to get on the same page, whether it is about developing the youth program, or bringing the right equipment, or taking it to professional levels. Having a unified body will help baseball grow. We see a lot of opportunities around baseball in India," says Mirabal. As a non-profit body, everyone can help CPBSC India to grow, he adds. CPBSC India will target corporates with which they aim to build a sustainable future and develop the game from grassroots. With the growing popularity of the game, the baseball league is not anymore a distant dream and to support this league, the CPBSC India will provide an optimum CSR opportunity for corporates to channelise their interest in the game. With the help of these corporates, baseball infrastructure will be able to grow and amateurs will be able to transform into professionals, subsequently developing an ecosystem in the country. "We envision to bring about a change so that any individual can play baseball to the highest levels and not have to stop pursuing the sport because of lack of opportunities," Mirabal continues, "Having a confederation, where all the states in India unified among the amateur baseball level, will be able to draw America's Major League Baseball, which can bring them forward and invest millions of dollars into the cities of India, all for baseball and that can even help the economy."

Depending on the conditions prevailing in India because of COVID-19, the CPBSC India is planning to host a baseball tournament in February 2021. This exhibition tournament can pull the crowd and people might just find the sport interesting and take active initiation to learn the sport. The CPBSC India will next be seeking funding from corporates in and outside the country for creating the necessary infrastructure. Basically, it would be an attempt to consistently keep the sport alive in the country. The confederation is hoping for a big baseball season in 2021 in India.

If the CPBSC India unifies the states of India, it will aim to enhance baseball from the grassroots, approaching coaches and players all across the country. The CPBSC India will then go on training the coaches with the help of the right technology and also it would be easier to communicate with global experts across the world. The tournament in February will be the stepping stone for CPBSC India, which holds a brighter prospect for baseball in India.