I developed an interest in athletics when I was in school. Growing up in Thodupuzha in Idukki district of Kerala I watched others having a keen interest in the sport, which eventually caught led me also in the sport. I always had this zeal to be the fastest of all and thus in a just few years' time, I was the 200m and 400m champion in the school level. The success continued in district levels as well. Back then I was also participating in high jumps and hurdles.

While others were undergoing professional training guided by their coaches, I didn't have the luxury and while I was in the seventh standard, I competed against them and won a gold medal at the Under-14 state level meet. This opened the gates to take my game to the national level. My father was very keen about me pursuing sports, so when I was in the eighth standard, he admitted me to a sports school. In the state meet, I brought the school national record home in 400m and 800m categories. In the Under-16 level, I also brought the national record. In the same year, I transitioned to the senior level and participated in the nationals where I got gold medals in 400m and 800m in Lucknow. 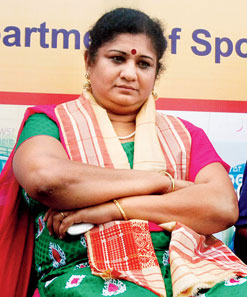 Shiny Wilson at an event (Source: The Telegraph)

Then I went to the World Junior meet in Korea, where I finished fourth. In 1983, I went to the World University Games in Canada. In 1984, there was the Olympics and South Asian Games. In 1985, I broke the 400m record won the gold medal. PT Usha got silver. I lost the medal in the 1986 Asian Games but I couldn't sleep properly for the next couple of days. In 1988, I got married after the Olympics. Just a week later, I went to the Patiala camp for training. In 1989, Asian track and field championships, I won two gold and silver. In 1990, I was blessed with a baby. When my daughter was nine months old, I won the nationals, When she was 11 months old, One international meet in Delhi, I was the only medal for India.

In 1981, before the Asian Games in 1982-83, I was studying in the ninth standard. I was a schoolgirl. It was very difficult for us to go to Patiala: the first camp was in Hyderabad, the second camp was in Patiala. With much difficulty, we went to so many places: Trivandrum and Cochin, all who were going to national camp faced difficulty at the time. Nowadays, all go by flights, for national camps and other events. Usha (P.T.Usha), me and others, during my time, used to travel in the second class [compartments in trains]. That, though, is ok. But it was too far, from Kerala to Patiala; three days it took us for the journey, getting down at Delhi and then…you can’t go alone, also, at the time, us girls. The whole year, at the time, we were in the national camp. They didn’t have synthetic tracks in Patiala at the time.

Also read: Every minute went by like an hour | By Sunil Chhetri

When we were participating in the 1982 Asian Games, then the 1983 World University Games, 1984 Olympics, our team was in a good shape. We were getting an Asian Games medal. In the 1984 Olympics, we entered the final of the 4x400 metre relay. I was the first woman to reach the semis of the Olympic Games that year. Gold medal winner Shiny Wilson holding her child after the medal ceremony of the 400 metres women run at the VII SAF Games in Madras on December 23, 1995. (Source: The Hindu)

I became the national champion in the 800 metres a year before the Asian Games in Delhi. After that and until my retirement, I won the event every time.

I still remember some bitter memories from my career when I cut into the inner lane and was disqualified while very much in front of the field during the 1986 Asian Games in Seoul. One of the fondest memory I have is of becoming the first woman flagbearer from India in the 1992 Barcelona Olympics.

My most memorable competition was the Asian Track & Field Meet at Delhi in 1989, despite being in the family way, I ran the 800 metres to come second behind Sun Sumei of China but I was declared the winner as Sumei tested positive for doping. People may find it surprising but I was running even faster after the birth of my child and set a new record of 1:59.85 in the 800m race at the 1995 South Asian Federation (SAF) Games in Chennai.

Three months after my daughter was born, I started my training. I put on weight but I went to Bangalore from Trivandrum. I spoke to SAI associate and slowly resumed my training.

India has a lot of potential in middle distance running. Our relay team is good, and I hope they will get a medal from the Olympics. We saw how fast Tintu Luka was. Also, I have faith in the Kerala government for nurturing the raw talent in our state. The govt has given a lot of encouragement and also money with that. In school level, the training is going good. The federation supports a lot that's why people are motivated.

I am working in Food Corporation of India in Tamil Nadu and we are giving out a lot of scholarships to talented athletes and helping them land jobs. I am also the vice-president of Tamil Nadu Athletics federation and an Executive member of AFI.

Also read: We will win 10 Olympic gold medals which I had missed | By Karnam Malleswari