2019 World Boxing Championships: History of Indian boxing at the Worlds 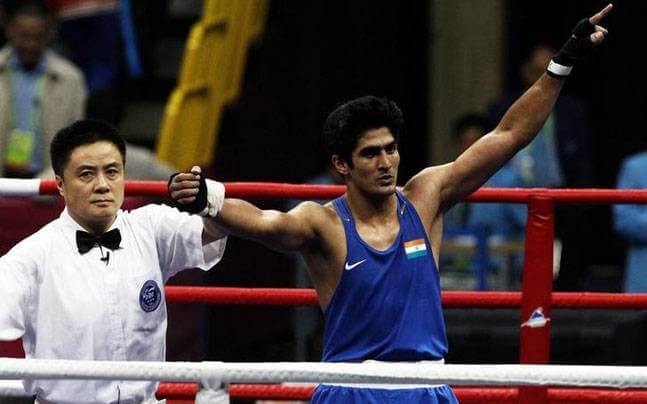 Boxing calendar’s biggest event, the World Boxing Championships is around the corner and will witness the best boxers competing for one of the most decorated titles. The 2019 edition will be held in Yekaterinburg, Russia and is scheduled to start from 7th September 2019 with the grand finale slated for 21st September.

Across the history of Men’s World Boxing Championship, India have won 4 medals, the first of which was won by celebrated boxer Vijender Singh in 2009 in Milan, Italy. While our men pugilists get prepped to unleash themselves at the upcoming edition, let’s take a stroll down the memory lane of India’s success at boxing’s most prestigious event.

India’s flag bearer in boxing, Vijender Singh was the first pugilist from the nation to medal at the coveted world championships. Vijender, who has worked tirelessly to put Indian boxing on the world map, won the bronze medal at the 2009 edition of the big-ticket event in Milan, Italy. In the same year, he climbed to the pole position of the world rankings in its annual middleweight category list with 2800 points.

After a promising run from Vijender at the Worlds in 2009, the Indian succumbed to Abbos Atoev of Uzbekistan in the semi-final bout, by 7 points to 3 and settled for the bronze. Vijender won the first round 1–0, only for Atoev to run rampant in the second, landing five unanswered blows. The final round witnessed with both fighters scoring on a couple of occasions, but the results were tipped in the favour of his opponent.

Vikas, making his welter weight debut, defeated Vasili Belous of Moldova in a contest to find a place in the last four of his category in the Championships. In the semis, he was up against Shelestyuk of Ukraine but went down fighting with a spirited display. Shelestyuk, prior to the bout, had beaten world number 3 and 2009 world championship silver medalist Andrey Zamkovoy of Russia in the quarters to set up the semis clash.

Despite succumbing in the semi-finals against Shelestyuk, it was a stunning performance by the then 19-year-old Vikas Krishan, who went the distance in his very first senior world championship and also qualified for the London Olympics in the process.

At the 2015 World Boxing Championship in Qatar, Shiva Thapa etched his name in the historybooks as India’s only third medalist at boxing’s most pressiguous event.

Going up against Uzbekistan boxing heavyweight Murodjon Akhmadaliev, both the boxers produced one of the most exciting matches at the Worlds, if not boxing’s history. In a pulsating encounter, the Assam boxer left no stone unturned, but Akhmadaliev’s pressure and aggression paid off as he won the bout 3:0.

In the 2019 edition, however, the 4-time Asian Championship medalist Shiva Thapa won’t feature in the Indian contingent after he lost to Manish Kaushik in the trials and had to relinquish his World Championship berth.

With a wildcard entry, Gaurav Bidhuri enjoyed a fairytale run at the 2017 Worlds. It was by a stroke of luck that he ended up receiving the wildcard that was originally meant for Bhutan. The Asian Boxing Confederation (ASBC) gave the entry to Gaurav after Bhutan declined the offer.

He made sure to not let the lucky break go futile and upstaged Ukraine’s Mykola Butsenko in the pre-quarterfinal. Butsenko is a two-time European Championships’ silver-medallist and the 2013 world championships’ bronze-winner.

Bidhuri thus ended the tournament with a bronze medal, taking India’s cumulative tally to 4, the past winners being- 2009 (Vijender Singh), 2011 (Vikas Krishan) and 2015 (Shiva Thapa).

Press Trust of India - Modified date: March 27, 2020
The IOC and international sports federations held a teleconference on March 26 where it was decided to respect the qualification process.
Read more