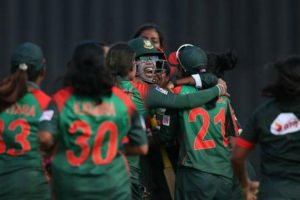 History of Women’s Cricket got re-written today with Bangladesh beating the six-time Asia Cup Champion India by just 3 wickets to grab the Asia Cup Trophy today. So, Bangladesh became the first ever to nation to win the Women’s Asia Cup other than India.

The match was an absolutely thrilling sight of such a striking contest between the two sides.  Bangladesh’s stunning performance today brought down India’s unbeaten-streak in the tournament to the cease button. Bangladesh bowlers Khadija Kubra and Rumana Ahmed scalped two wickets each as India posted a lowly 112/9 at the end of the innings. Top-order batter Harmanpreet Kaur played in her fighting-relentlessly mode as the wickets kept on falling from the other end. Kaur fell out against Khadija in the final ball of the innings; her 42-ball knock was laced with seven boundaries and no hits over the fence. 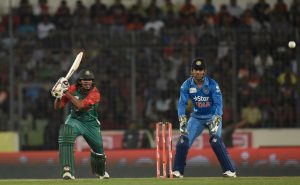 Harmanpreet had scored up her half century as she hits her seventh boundary of the innings, thereby bringing India to 107/7 in 19 overs. From being a spectator of the match, it can be said that India’s  was a below-par performance despite being  the six-time champions.  In Bangladesh’s reply, Poonam Yadav tried her best to restrict them as she finished with a spell of 4-9 from four overs, while captain Harmanpreet could just scalp one wicket. Lam and Rumana Ahmed in the fourth and fifth deliveries. However, it all came down to the wire as Jahanara Alam successfully ran two runs between the wickets to complete a thrilling victory to the give the Women in Green a memorable win.

The six times champion Indian team had started off, in an incredible fashion in the Asia Cup as they played against the host Malaysia itself, in their opening encounter. India defeated Malaysia by 142 runs after they bowled out the home side for just 27 runs in a chase of 170 runs. India picked up another huge win against Thailand in their second encounter as they scored 132/4 in their 20 overs. Thailand only managed to reach 66/8 in their 20 overs as India picked up a 66-run win. Against Bangladesh, India scored 141/7 in their 20 overs after electing to bat first. Bangladesh chased down the total in 19.4 overs. After the defeat, India bounced back in their next game against Sri Lanka. After electing to bat first, Sri Lanka managed to reach 107/7 in their 20 overs. India chased down the total in just 18.5 overs comfortable. India beat Pakistan by 7 wickets to enter the final. India had dominated against her arch-rival Pakistan in the virtual semi-final clash on Saturday as they picked up a 7-wicket victory to enter the final. India had been in an absolutely dominant form, losing only one match till the final. But it was Bangladesh that defeated them, the same team that clashed them once again and for all in the final.

The Indian team faced defeat after 6 times, performed in a manner that left us quite really disappointed and shocked. The stadium in Kuala Lumpur could see the one nation’s cries  and surprise of having blown off and at the same time see another nation’s extreme joy and surprise at having grabbed such a victorious and historical win!  Big hats off to the Bangladesh Women’s Cricket Team for its stupendous performance today and a reigning-supporting pat to the Indian to catch back the trophy soon enough!

People want easy money rather than working hard in hopes of getting quick returns. And this is the very fact that gives rise to...
Read more
129,221FansLike
11,368FollowersFollow
6,937FollowersFollow The Bridge Desk - Modified date: March 27, 2020
There has been a 90% increase in the viewership of sports in television in the last four years with most of the cricketing events getting the majority of the views.
Read more