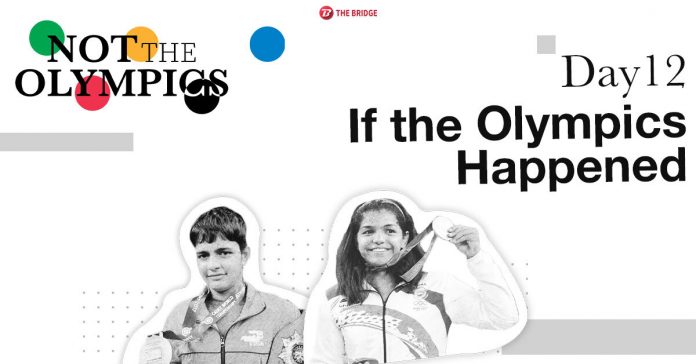 Four months after the International Olympic Committee (IOC) and officials in Japan postponed the Tokyo Olympic Games amid soaring coronavirus infection rates and lockdowns across the world, uncertainty prevails. The unpredictable nature of the virus is making it impossible for officials to say definitively that the Games will happen or, if they do, what they might look like. Though we are missing the fervour of the quadrennial event, we are soaked in the Olympic spirit.

For the next two weeks, we will be writing a series of articles with the title “What if Olympic Happened”, where we will hypothetically discuss the day-wise performances of the Indian athletes, which were actually scheduled in the Olympics 2020 roster.

Today would have been Day 12 at the Tokyo Olympic Games, a day on which India could have been fighting for at least two medals. Here is a breakdown of all that could have gone down in Tokyo had the coronavirus outbreak not happened.

India is not primed to win a lot of medals from athletics, though the discipline does boast of one of the highest number of medal events at the Olympics. In accordance with the proposed day 12 schedule, only two medal events would have taken place on Tuesday — the men’s 800m final and the women’s 3000m steeplechase final.

India could have had representations in both the finals in the form of Jinson Johnson and Parul Chaudhary.

Having qualified for the 800 metres event at the 2016 Rio Olympics, Jinson Johnson, India’s primary middle-distance runner, has already experienced what it is like to be in the Olympics. However, off late, Jinson has been solely focusing on the 1500m event at international meets. As a result, his chances of winning a medal or, for that matter, even qualifying for 800m are quite slim considering his recent world ranking and his all-time best timing of 1:45.77. The qualification timing mark for the Tokyo Games stands at 1:45.20 which is a little less than Jinson’s all-time best.

When it comes to 3000m Steeplechase, however, India has enjoyed quite a few good performances over the years. Lalita Babar and Sudha Singh have given a good account of themselves in recent years but, this time, it seems unlikely that any Indian would have qualified for Olympics in this event.

As for the non-medal events of the day, the men’s javelin throw would have garnered a lot of eyeballs among Indian sports enthusiasts. Neeraj Chopra, the country’s  brightest hope in Athletics, would have been in action alongside Shivpal Singh in the qualifying rounds. Speedster Hima Das could have also been seen vying for a spot in the finals of the women’s 400m alongside MR Poovamma. Wrestling is a sport in which India tends to dominate, especially at the Olympics. In fact, in Rio, when all hopes of bringing home a medal was almost lost, it was Sakshi Malik who claimed a surprise bronze and saved India’s face.

However, since then, Sakshi’s has gradually been on the decline. Tokyo 2020 could have been a harsh reality check for her. On day 12, she was supposed to be on the mat at the Olympics, but as things stand, she was not even considered in the team for the Asian Qualifiers (given that a world qualifier was also scheduled to be held before the Games).

If anything, the pandemic and the pause that has come due to it, could do wonders for Sakshi’s career. Nevertheless, India need not worry to much about it. In Sonam Malik, 18, the country has an exciting talent at its disposal. Even if Sakshi does well and makes the team, it’s best, from an Indian perspective, to lead the way with Sonam.

Being a cadet World champion, Sonam has proven herself on the global stage. She enjoyed a decent senior debut in Asian Championships and Rome ranking series, but in the coming days, she can only improve. However, expecting an Olympic medal from the youngster would have been too much.

In 57kg, one of the toughest and most competitive weight categories in women’s wrestling at the moment, Pooja Dhanda or Sarita Mor would have carried the country’s hopes. The medal chances would depend on who makes it to the Olympics in this weight category as Pooja would have a better chance than Sarita.

After having a successful campaign in 2018, where she claimed the bronze medal at the World Championships, Pooja lost it completely in 2019. It goes without saying that 26-year-old Guntur grappler, despite her oozing talent and demeanour, would have needed to step up her game.

Not many would have considered the Indian women’s hockey team to be medal contenders. However, by their own right, they would have indeed been the dark horses in the tournament — so much so, that a semifinal appearance and a consequent bronze medal win could have been very much on the horizon.

If Rani Rampal and Co. managed to build on the promise they have shown over the last one year or so, then they could have been in action on Day 12 of the Olympics in the women’s semifinals.

Other events on day 12 and possible contenders: Sayan Chatterjee - Modified date: September 28, 2020
When East Bengal met Mohun Bagan in the I-League in January, it seemed like the writing was on the wall in terms of the fate of the Kolkata Derby, at least for the immediate future. Mohun Bagan won the match 2-1 on the day and...
Read more