Quite the close margin call given how Manika Batra has shared success with both Sathiyan and Sharath - but only one stands out by a fraction.

The fact that table tennis has scaled unprecedented heights in India is no longer a secret.

If we are to assess, of late a trio of Indian paddlers - Manika Batra, Sharath Kamal and Sathiyan Gnanasekaran have been ruling the roost with their top-notch performances, both individually as well as with each other and the results speak for themselves.

Manika Batra, 26 and Sathiyan Gnanasekaran, 28 joined forces once more in the first post- Tokyo Olympics event they participated in - the WTT Contender in Budapest. Delivering solid and clinical performances throughout the tournament, the combine of Sathiyan and Manika created history by becoming the first Indian pair to lift an international World Tour Mixed Doubles title. The Indian duo defeated the Hungarian pair of Nandor Ecseki and Dora Madarasz 3-1. The victory was clinched in 11-9, 9-11, 12-10, 11-6.

Manika Batra, ever since she shot into fame after becoming the 'golden' girl at the 2018 Commonwealth Games, has maintained her form consistently and has only delivered strong performances making her the easy choice in a Mixed Doubles setting. On the men's half, both Sathiyan Gnanasekaran, ranked World No. 39 and Sharath Kamal, ranked World No. 32, have also been consistent performers and again, been successful partners for Manika at the biggest of stages.

With just weeks having passed after the Tokyo Olympics concluded, Manika and Sathiyan's pairing wasn't accepted so easily by Sharath, on whose side Manika has played more, even at the Tokyo Games. Sharath was obviously hurt, not so much by the unanimous decision taken by the Table Tennis Federation of India (TTFI) than by the poor handling of the matter.

"Forget my seniority, as a teammate, I expected them to tell me about their plans. I learnt it from a text message shared by a fellow player," said the veteran paddler to Sportstar.

Manika had informed Sharath by e-mail about this decision while Sathiyan approached the TTFI directly with the proposal and pitched the desire of the duo to participate in the 2024 Paris Olympics as a pair. However, Sharath did send them their good wishes ahead of the tournament which the young pair went on to eventually win.

Who is a better partner for Manika Batra? In table tennis, like in tennis, Manika Batra's role is similar to that of a Sania Mirza - both having been the most successful female players from India in their respective sports. Both Batra and Mirza have tasted success in doubles in their fields, especially in the Mixed categories and due to that, they have also been the cynosure around whom a scramble inevitably occurs, controversies spike.

In the case of Manika Batra, both Sathiyan Gnanasekaran and veteran paddler Sharath Kamal have allied by her side and on both occasions, success has come knocking on the door as well. Similarly, in Mirza's case, it was either a Leander Paes, a Mahesh Bhupathi or a Rohan Bopanna who'd want to team up with the 6-time Grand Slam champion.

Routing back to table tennis and Manika Batra's partner's again - the margin of difference is very thin yet noteworthy. Manika Batra and Sharath Kamal's pairing works like magic, owing to their inherent playing styles. While Batra, with the use of her long pimple rubber is able to change the spin and the pace of the game at any time, slowing it down, Kamal excels in his offensive moves, ensuring a perfect combination takes place that is enough to confuse the opponent pair. 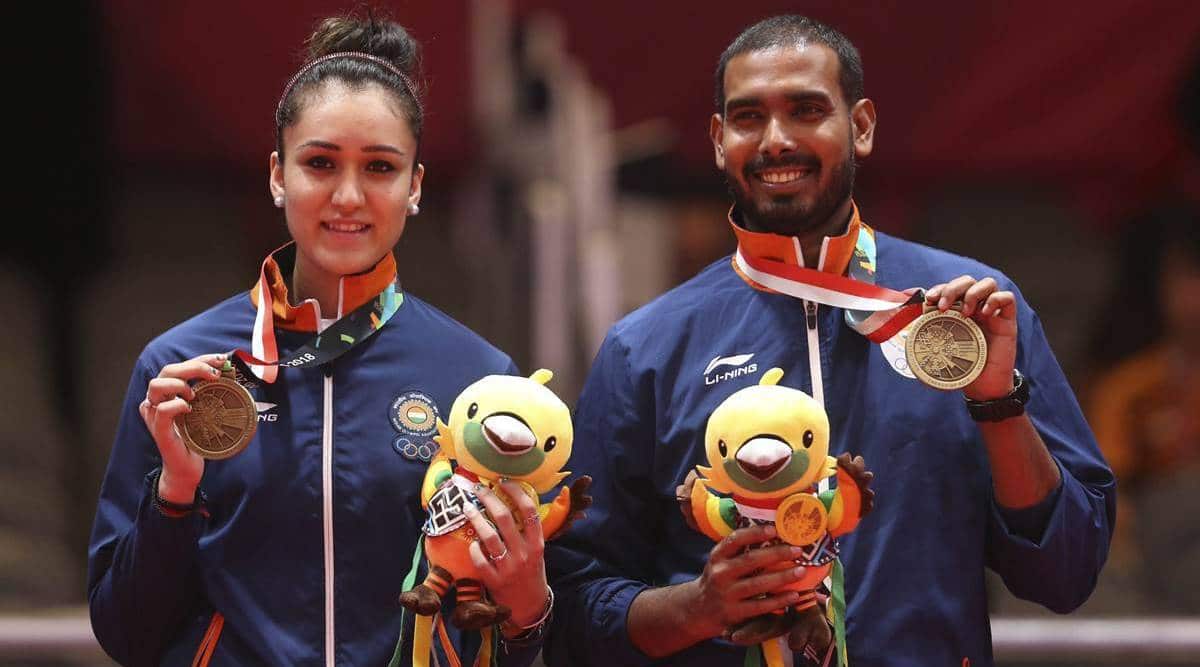 Riding on technical advantages like this, Manika Batra and Sharath Kamal paired up at the 2018 Asian Games - a tournament that is the haunt of the top table tennis playing nations like China, Japan, Korea, Hong Kong, Singapore and Chinese Taipei and went on to win a coveted bronze medal.

At the Tokyo Olympics, it was just a bad day at the office for Manika and Sharath as right in their first match, they had to go up against the third seeded pair of Lin Yun-ju and Cheng I-Ching of Chinese Taipei. It showed that there wasn't enough practice in between the two owing to pandemic situations as they appeared ruffled and suffered a crushing loss in straight games to crash out of their Mixed Doubles expedition.

Looking forward to the road ahead. 🇮🇳🏓 #Olympics #StrongerTogether pic.twitter.com/u2UsRQuZEP

With Sathiyan Gnanasekaran, who also has the same shake hand offensive grip like that of Sharath, things are only slightly different as Sathiyan, at 28 is more than a decade younger than Sharath who is 39 currently. Manika paired up with Sathiyan in 2018 as well, and together they went on to win the bronze medal at the 2018 Commonwealth Games after defeating the pair of Mouma Das and Sharath Kamal at the Gold Coast event.

With not even a month lapsing since Manika and Sharath returned from their Tokyo Mixed Doubles sojourn, Manika has re-grouped with Sathiyan once again. However, this is not an individual decision but rather a group one.

"Sathiyan and Manika discussed it after returning from Tokyo. We as personal coaches feel they have the best shot at all the multi-disciplinary games in the next three years," S. Raman, Sathiyan's personal coach, told The Hindu on Wednesday. Therefore, participating at the Budapest WTT Contender, Sathiyan and Manika, despite lack of enough practice, were able to come in with all their guns blazing and notched good wins over World No. 7 Slovak pair of Barbara Balazova and Lubomir Pistej in the quarter-finals as well. In the finals, the Indian pair took on the Hungarian duo of Nandor Ecseki and Dora Madarasz to win the coveted title.

"It is great that we were able to win the event with very little practice. It certainly shows what we can achieve as a pair. We were quite tactically and seem to complement each other's game. "Manika had me approached for the partnership a while. We both thought it was the best time to give it a shot. She is our best ever female player and we have shown the potential that our partnership has. The more we play the better we get," Sathiyan told PTI.

With both Sathiyan and Sharath, Manika has tasted her share of success but if we are to see the achievements closely, it is with Sharath Kamal that Manika Batra has fared better so far. A bronze medal at the Asian Games is no easy job, especially because of how most top players from table tennis strong nations take part in it. Other than the bronze at the 2018 Asiad, Sharath and Manika were impressive at the Tokyo Olympic Asian qualification tournament and were one of the medal favourites from the Indian contingent for a medal at the Games in the mixed doubles category.

With Sathiyan, Manika may have a bronze too from the 2018 CWG and a gold now from the WTT Contender in Budapest, but these victories do not measure up to the Asiad achievement. However, both Sathiyan and Manika are young and are therefore better off as partners keeping the future in mind, as might have been the reason behind the decision to regroup ahead of the 2024 Paris Olympics.