Slaying the Chinese to win India's first-ever gold in mixed doubles at the Asian Junior C'Ships, teen paddler Yashaswini Ghorpade is on a roll and she is hungry for a spot in the Indian women's senior team next.

With a neat collection of medals amassed and some history-creating done, 17-year-old rising table tennis star Yashaswini Ghorpade looks back at the last few weeks with only one gnawing regret.

What is it? Well, she missed out on being on the trending Kala Chashma Instagram reel with her teammates because...she fell asleep after her exploits at the Asian Junior Table Tennis Championships - clinching a historic mixed doubles gold and a bronze in the singles.

"I was too tired, I missed that out and I actually regret it!" the U19 World No. 7 teenager tells The Bridge, moments after touching down in her hometown in Bengaluru, capping off a sensational couple of weeks where she was in red-hot form. In fact, Ghorpade clinched 5 medals in two weeks across two events.

At the Asian Junior Table Tennis Championships in Vientiane, Laos, Yashaswini paired up with former U17 World No. 1 Payas Jain to win India's first-ever gold in the U19 mixed doubles at the age group continental championships, taking down a Chinese pair.

The young paddlers won the prestigious 🏅 in Mixed doubles event 💪

Congratulations to both for this amazing feat! 🤩🏆🇮🇳 pic.twitter.com/guFH1x8JnB

"The thing is, that was the first time Payas and I played and we had never even practised before also," Yashaswini says with a chuckle, thinking back to their splendid win.

Not only that, Yashaswini's form did enough damage and she clinched a bronze in the U19 girls' singles by reaching the semi-final stages.

Finishing the Asian tournament on a high, Yashaswini carried the momentum into the WTT Youth Star Contender Skopje 2022 in North Macedonia and put up another stellar show - winning gold once more in U19 mixed doubles, with Puerto Rico's Oscar Birriel and reaching the semi-finals with Suhana Saini in U19 girls' doubles and the U19 girls' singles as well - all consequences of her exceptional form. Although she is soft-spoken, Yashaswini's unfazed, fearless nature comes to the fore when she is on the table, across tricky opponents - especially Asians.

"The experience was amazing as I got to play against a lot of Asians after a long time. The pandemic had paused the tour and we didn't play much then," she explains.

"I learned a lot from the last few weeks, the biggest of which is that we should not give up till the last moment and fight till the end, anything can happen," she says optimistically, no longer afraid of taking on Chinese paddlers. 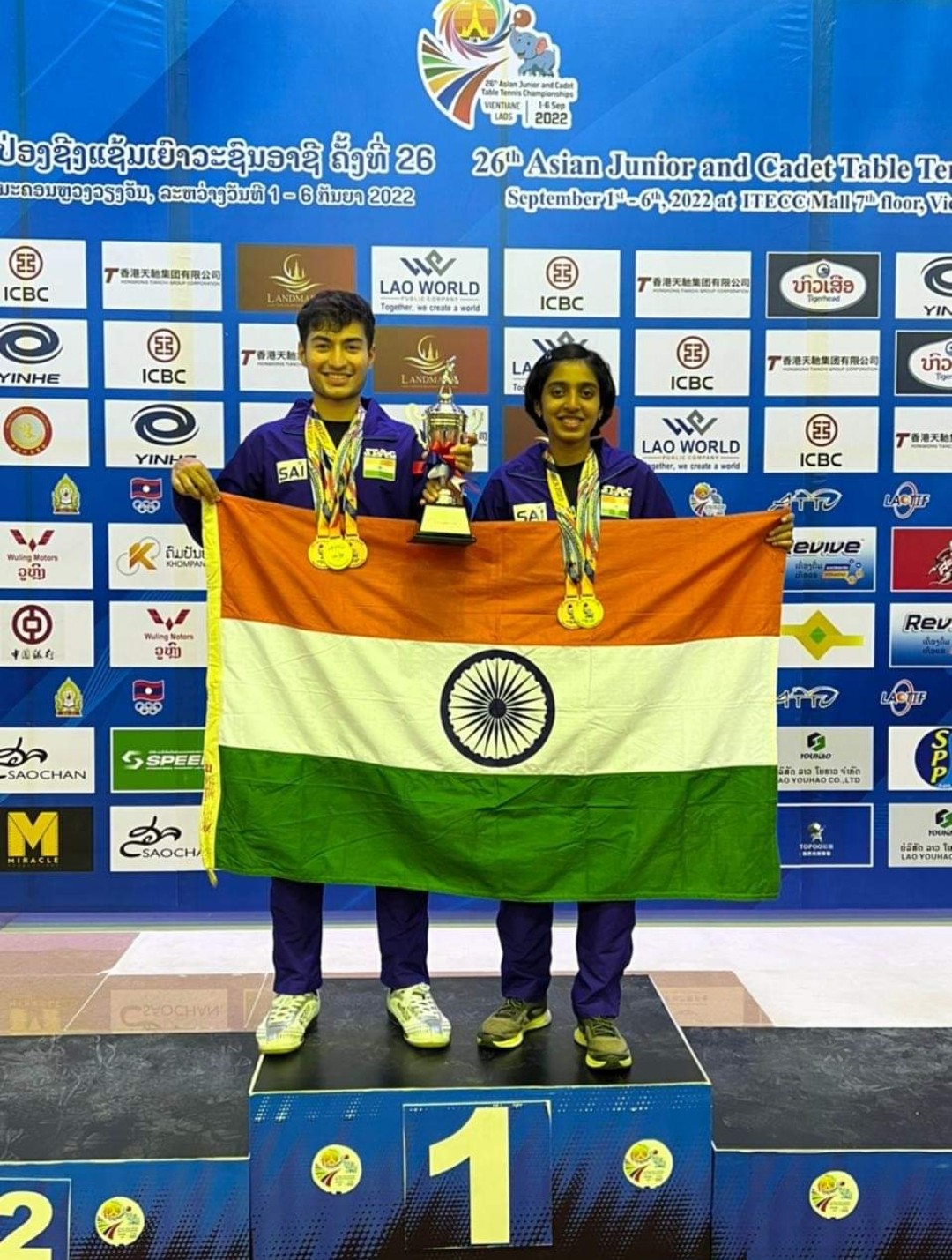 "Chinese paddlers are great but it's just a thing in our minds. If we can fight with our minds, we can defeat them as well. We should break that notion and play confidently," Yashaswini proposes, having learnt from experience.

Therefore even though there were quite a few nervous moments in her Mixed Doubles finals at the Asians, she knew how to keep her nerves.

"Earlier I used to be afraid of them too but once I saw that I can also play with the Chinese...especially in deciders and win too, I gained a lot of confidence," she says, with quiet confidence.

Bagging a spot on the Indian team

With the blazing form, she is currently in, the Karnataka star will be putting her all into preparing for the National Games in Gujarat and subsequently eye for a good performance at the zonal tournaments, as well.

From being taken to the Horizon Table Tennis Academy in Basavanagudi as a 7-year-old with addiction for all things Doraemon and Shinchan, by her father, to now winning medals for the country, Yashaswini has come a long way and so have her dreams.

"I would always watch TV! I wouldn't go out and play and my father, who played ping pong in the office, wanted me to take up a sport and enrolled me at the Horizon Table Tennis Academy," Yashaswini recalls, her voice rising in excitement as her mind went back to her favourite cartoon shows as a kid. 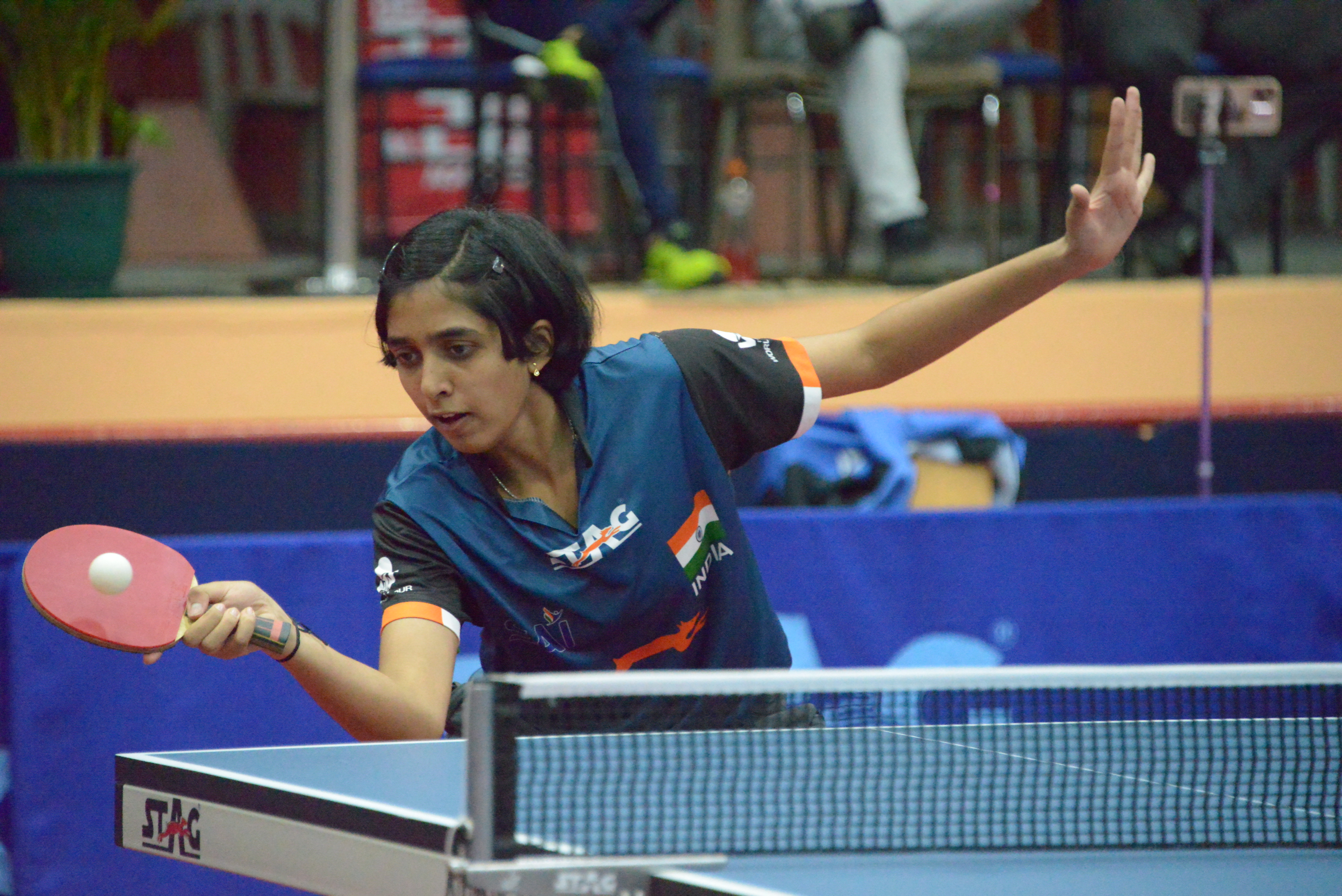 Yashaswini wants to earn a seat in the Indian women's senior team next (Source: ITTF)

Quickly she recomposes herself and talks about the future ahead, discussing the National Games, which are due to start on 20th September for table tennis only, ahead of the main Games starting on 27th September.

"I am going to be playing in the team event and I have qualified for the singles as well from Karnataka and I hope to perform well there," she says.

"But the bigger plan for this year is to make it into the Indian senior team," she quickly adds.

"I will have to play well in the zonal tournaments to ensure that I can get a seat in the Indian women's team soon! The competition is intense and there is a lot of work to be done," the focus spot-on in her confident voice, just before she signs off.