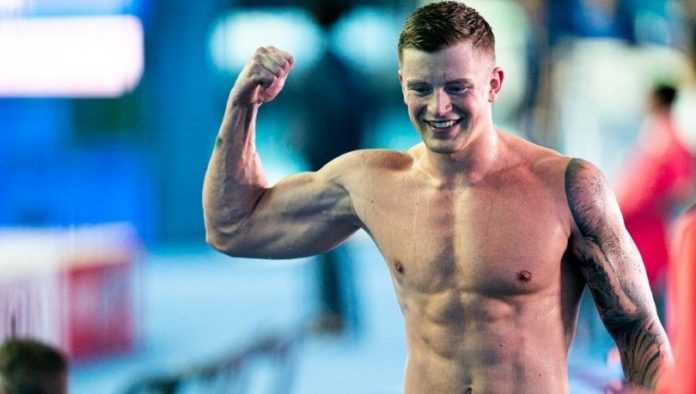 Gwangju, South Korea is playing host to the World Aquatics Championships just about 12 months ahead of the 2020 Tokyo Olympics.

It is only natural to expect swimmers from across the globe to come out guns blazing in their quest to achieve the Olympic qualifying times, and the world’s best swimmers shone through, with some strong performances within and outside the pool.

It was the powerful Adam Peaty with that eye-catching tattoo of a lion on his left arm mighty biceps, shapely pectoral muscles, who led the way.

Peaty was under his own world-record pace at the halfway stage before coming home a full body-length in front and 1.32 seconds ahead of teammate James Wilby. The margin of victory is nothing less than a country mile. Project ‘56’ is not too far.

Not one to rest on his laurels, Peaty won gold in the 50 m breaststroke with another stunning 26.06 seconds swim. The Brazilian, Felipe Lima swam the race of his life but still finished 0.60 seconds behind.

This is Peaty’s third successive 50-100 m double in World Championships. Throw in the Rio Olympics gold in the longer distance, multiple European Championships medals and we have a legend of not just the sport of swimming but world sport in general. And he is far from finished.

But the exploits of Peaty, Hosszu and a couple of brilliant youngsters failed to overshadow the controversy surrounding the giant Chinese superstar Sun Yang’s participation at the Gwangju worlds.

True to form and ability, Sun won the 400m freestyle with a late surge to overcome strong rivals Horton and Detti who won silver and bronze, respectively. But what transpired during the medal ceremony took the spotlight from the actual race.

The Olympic champion from Australia, Mack Horton, did not shake hands with his bitter rival Sun and even refused to join him on the podium. The controversy almost overshadowed a golden first night for Australia with Ariarne Titmus upsetting American great Katie Ledecky in the 400m freestyle and the women’s 4x100m freestyle relay team triumphing too.

Horton was unhappy that Sun, who served a 2014 doping ban, had been allowed to compete ahead of a Court of Arbitration for Sport (CoA) hearing in September that may end the Chinese star’s career. The 10-time world champion has been accused of smashing vials of his blood with a hammer during a clash last year with testers and faces a lifetime ban if found guilty.

Later in the competition, Peaty’s teammate, Duncan Scott, did likewise during the medal ceremony of the 200 freestyle prompting an exuberant response from Sun, ‘ I am a winner, and you are a loser’.

Many top swimmers like Adam Peaty, Lily King, Mitch Larkin, pushed their weight behind Horton and Scott. Larkin even claimed that 99% of the swimmers were in support of these protests.

Back in the pool, Australia have definitely unearthed a new middle distance jewel in teenager Arianne Titmus.

Titmus became the first Australian woman to claim the world 400m title since Tracey Wickham in 1978 after pulling off an upset victory over the unstoppable American Ledecky. The young Australian’s energy in the back end of the race certainly stunned Ledecky and her opponents.

Ledecky had not been beaten in 400m, 800m or 1500m freestyle at a major international meet since 2012, until the 18-year-old pulled off one of the great upsets. This American-Australian over the middle and longer distances will be keenly watched in Tokyo.

The women’s 100 fly saw another major upset as Canada’s Maggie Mcneil defeated the great Swede, Sarah Sjostrom. The Swede who owns the 50 and 100m fly world titles, was out fast, nearly a second ahead of MacNeil who turned in 5th at the halfway point. But MacNeil proved very strong at the back end to win from 55.83 to 56.22. Sjostrom had previously held top 10 times and was the second woman ever to break 56. MacNeil now joins her on that list with the 8th fastest performance of all time and is the second-fastest woman in history.