How Indian squash grapples with lack of full-time coach 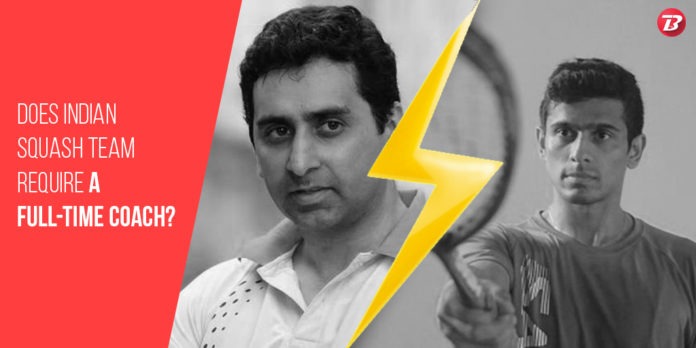 Indian squash has been making all the right noises in recent years performance-wise and there are enough signs to suggest that Indian squash is in good health – the country currently has as many as four men players in the top-60 of Professional Squash Association (PSA) rankings – our ace player Saurav Ghosal is the top-ranked Indian at 11th, while his Kolkata city-mate Ramit Tandon is ranked 49th. The likes of Mumbai boys Mahesh Mangaonkar and Vikram Malhotra are ranked 54th and 60th respectively, while Joshna Chinappa is the top-ranked woman player at 11.

Indian squash players have found the going tough on the highly competitive world circuit for many years now, but the sport steadily derived its strength on the back of names like Ritwik Bhattacharya, Saurav Ghosal, Joshna Chinappa, Dipika Pallikal Kartik among others. In fact, the big break for Indian squash came in 2013 when Saurav Ghosal became the first Indian squash player to reach the World Championship quarterfinals – the country built on this and won its first Commonwealth Games gold medal in the 2014 edition.

The sport scaled a new ‘high’ as India turned in its best-ever medal haul at the 2018 Asian Games. The consistent podium finishes in Commonwealth and Asian Games are a stark indicator that India is fast developing as a squash nation competing with the might of traditionally strong squash playing countries like Egypt, Australia, England, France, New Zealand and Germany.

However, a close look at the current crop of players brings to the fore one thing – many of our top men and women players are not getting any younger – the likes of Joshna Chinappa and Saurav Ghosal are probably in their best shape form-wise and are performing, even though they are over 30. Even the likes of Dipika Pallikal Kartik, Ramit Tandon, Mahesh Mangaonkar and Vikram Malhotra are in their late twenties. So how will the future of Indian squash pan out, in terms of churning out young talents, who can transition to the senior circuit?

This thought becomes more pronounced when you realise that Indian squash players are training without a full-time chief coach for 18 months now since the country’s Egyptian chief coach Achraf Karargui quit his job ahead of the 2018 Commonwealth Games. A lot has been said about his untimely exit, but it is only fair that the focus is not on what transpired his ‘exit’, but on how the country’s coaching programme will hold up, since a full-time chief coach is considered imperative for development of junior talents as well as for the senior players.

However, the Squash Racquets Federation of India (SRFI) has a different perspective about roping in a full-time coach. “The federation has taken a decision that the services of a full-time chief coach are not needed as most of our top players are based outside India. Saurav (Ghosal) spends time training in the USA and England, while Ramit (Tandon) is based in the USA, Mahesh (Mangaonkar) is based in Belgium.

As far as the women players are concerned, Joshna (Chinappa) is based in the USA, while Dipika is not playing competitive squash for a while now – all these players work with their own coaches and given this scenario a full-time coach would have little to offer. Moreover, the federation has roped in former international Dhiraj Singh as Director of Coaching to oversee our coaching programme,” says Squash Racquets Federation of India secretary-general Cyrus Poncha.

The Dronacharya Award-winning national coach, who earlier this year, took charge as SRFI secretary-general, rejected the line of thought that the sport of squash in the country is suffering owing to the absence of a full-time chief coach. Poncha makes his point:

There is a thinking that the lack of a full-time chief coach is hurting the junior players more than the top senior players, who are based overseas. Poncha gives his take. “A centralised coaching programme is not possible in India as youngsters can’t leave school or college to pursue it on a full-time basis. All junior players are part of clubs and have their own set up (including their own coaches). It is only during the holiday period any long-drawn camps can be conducted,” the SRFI secretary-general pointed out.

The country’s top-ranked Indian men’s player Saurav Ghosal took a different line of thinking and says a full-time chief coach is vital for the betterment of Indian squash, especially for the junior players, who are just starting out. He tells us from London:

The country’s highest-ranked men’s singles players agrees that finding the right guy for the chief coach job is far from being a piece of cake. “It’s not easy to find someone with the requisite skillsets for the chief coach position and hopefully, India will find someone soon. The sooner we have someone capable, the quicker we will have an environment designed to bring the best out of all of us, in which we can thrive and bring home more medals for India,” he quipped.

Saurav dwelt on how youngsters must be imparted the right lessons. “Juniors must be taught the right technique from an early age and also guided to develop an understanding of the game, in terms of structuring points and finding spaces on the court. For this, coaches themselves must have the requisite knowledge. Long-term benefits over short-term gains must always be prioritised as this will help youngsters build a solid foundation and provide them with the right tools to succeed at the senior level.”

Surely, a full-time chief coach can go a long way in strengthening India as a major squash playing nation.