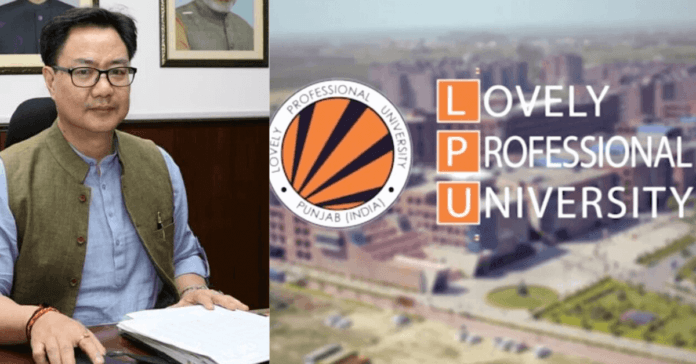 The Indian Union Sports Minister Kiren Rijiju has taken action against Lovely Professional University (LPU) after it was found that the authorities awarded gold to a swimmer who took an early start and finished second in the 50 metre Butterfly race. The swimmer, Sahil Chopra of LPU, was also wrongly awarded gold in the 400 metre Freestyle event in the All India Inter University Swimming Championship that was held at the LPU campus this week in Punjab.

A national swimmer had shared videos of the swimming meet on his official Twitter page, in which it is visible that Chopra started the race early before the hooter went off. Despite the early start, he finished second in the race, with Mihir Ambre of Savitribai Phule University in Pune ending first. However, the results that were published by LPU had their participant Chopra in the first position. His timings had been fudged as well, with the result sheet stating that the race had been completed in 24:32 seconds.

The swimmer took a strong stand against the entire incident and went on a rampage on Twitter, where he even tagged Rijiju and urged him to look into the matter.

“Such blatant cheating happening at All-India Inter University Swimming Meet 2019. This happens every year. Requesting Hon’ble Sports Minister @KirenRijiju to take swift action to prevent such incidents from discouraging other athletes at college level,” he wrote.

In the 400-metre swimming freestyle event as well, Chopra was given an early lead but he finished second. Eventually, his results were rigged by 40 seconds to allow him to win gold.

Indian athletes did not take lightly to the case, with Arjuna Awardee swimmer Virdhawal Khade tweeting, “Another example of the same but in a different event. The swimmer did end up on the podium.”

The swimmer who tweeted addressing Rijiju, further added that such blatant cheating is a major reason why a country like India is unable to grab two-digit medals in the Olympics. Adding that a huge portion of USA’s Olympic medals is won by the NCAA athletes, he stressed on clearing up the college level games, so India too can dream big.

“If people are saying this kind of incidents happened earlier also and nothing was done. It’s high time some action is taken. It’s 2019. We can’t get 2 digit Olympics medals unless mess of college level athletics is cleaned up. USA gets lot of Olympic medals from NCAA athletes.”

His words were not unheard, as Rijiju responded to his tweet, and instructed the Director-General of Sports Authority of India and the AIU officials to look into the matter.

“I have taken cognizance of the issue. Director General of Sports Authority of India is in touch with AIU officials. The matter is being investigated by AIU and I am confident that the correct course of action will be taken soon,” he tweeted.

Dr. Baljit Singh Sekhon, the Joint Secretary of Youth Affairs and Sports shot a letter to the university, warning LPU that “no unprofessional conduct will be tolerated at any cost in the University Sports Sector.”