The Evolution of Indian Shooting – The Decade Gone By (Part 2) 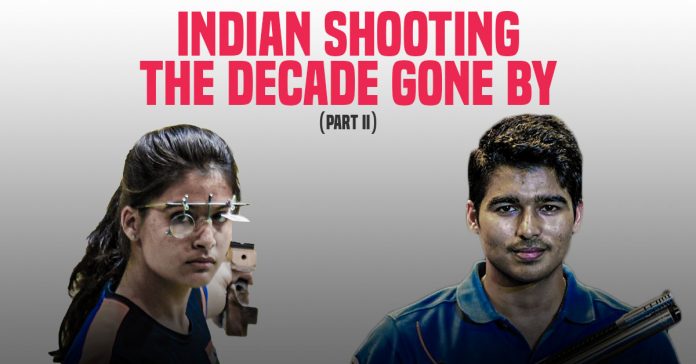 Part 1 of this article looked at the evolution of Indian Shooting in the past decade up till 2016. We now look at the current Olympic cycle – a cycle which has seen massive upheaval in both Indian shooting as well as the sport of shooting itself.

In terms of changes to the sport, 3 men’s Olympic events – 50m Rifle prone, 50m Pistol and Double Trap – were replaced with 3 mixed team events in order to attain gender equality. Further, the number of shots being shot in women’s events were increased to bring them on par with the men. At first, these changes were seen negatively from an Indian perspective, primarily because India had relatively good performances in the removed events. However, 3 years later, the situation is vastly different with Indian shooters having unleashed their potential in the rifle and pistol mixed team events.

At home, with the Rio blanking being viewed with shock and horror, the NRAI formed a committee led by the recently retired Abhinav Bindra to investigate what went wrong and suggest changes for the future. Among many other recommendations, one of the major suggestions of this committee was to strengthen the junior programme, and it has borne tremendous fruit faster than anyone would have ever imagined.

While 2017 was relatively ordinary, the old guard of Jitu Rai and Heena Sidhu stamped their authority over the pistol mixed team event winning all the 3 Golds on offer during the year (albeit in “test events”). However, little did anyone know that just 2 short years later, despite both Jitu and Heena losing their form and thus also their places in the Indian team, India will still be the undisputed team to beat in the pistol mixed team event.

2018 saw a young Indian team, led by Manu Bhaker, Mehuli Ghosh and Shahzar Rizvi, create shockwaves by topping the medals tally at the Mexico World Cup with a total of 9 medals, including 4 Gold. However, it must be noted that this World Cup was one of the least competitive World Cups ever seen, with many of the top shooters choosing to pass on the long flight to Guadalajara. As a result, the winning scores in general were also much lower than are usually seen at World Cups.

But the Indian young guns now had a taste of glory, and a hunger for more. With a lot of the younger stars still choosing to focus on the junior events, not a lot of senior ISSF medals were won during the rest of the year, but Indian shooting gave just a minor taste of what was to come with a rich medal haul at both the Commonwealth and the Asian Games, besides Anjum Moudgil’s Silver at the World Championships.

2019 – Indian Shooting Takes Over the World (in Rifle and Pistol)

Many may like to believe that India’s success this year came through a process of slow and steady evolution, but the numbers show that in reality, Indian shooters just took a giant 19 kilo wrecking ball and shattered the glass ceiling. The year saw a total of 19 Golds at ISSF events in Olympic disciplines, more than the past 9 years combined!! In fact, in rifle/pistol events, India topped the medals tally at each of the 4 World Cups as well as the World Cup Final. And all of this happened in a year when all the World Cups offered Olympic quotas, a fact which always results in increasing the competitiveness of the competitions even further.

The highlights of 2019 included Abhishek Verma and Saurabh Chaudhary sweeping the 10m Air Pistol event at the World Cups with 2 Golds each, with Saurabh even making World records in the process. Apurvi Chandela and Elavenil Valarivan combined to win Golds at 4 of the 5 World Cup events (including the World Cup Final), as they, along with Anjum Moudgil, created a unique Indian 1-2-3 on the World Rankings.

Yashaswini Deswal overcame two heart-breaking World Cups in Beijing and Munich to secure the Gold at the Rio World Cup, while Manu Bhaker and Divyansh Panwar both laid their hands on the yellow metal in the World Cup Final.

The rifle mixed team event returned 5 medals, including 3 Golds, shared between the teams of Anjum Moudgil/Divyansh Panwar and Apurvi Chandela/Deepak Kumar, while the team of Manu Bhaker and Saurabh Chaudhary remained undefeated throughout the year in the pistol mixed team event, sweeping the Gold at all the 4 World Cups. It was thus fitting that at the World Cup Final, where mixed team events were contested between international teams formed by a random draw as opposed to national teams, both Saurabh Chaudhary and Manu Bhaker still reached the Gold Medal match with their respective partners and competed against each other.

Amidst all the youth, Rahi Sarnobat had a resurgence securing the Munich World Cup Gold as well as the Asian Games Gold, and Sanjeev Rajput showed he still had a lot left in him with a Silver at the Rio World Cup. However, stalwarts like Gagan Narang, Jitu Rai and Heena Sidhu all eventually lost their places in the national team, and slowly reduced their participation in competitive events despite neither of them officially retiring.

While the rifle and pistol shooters have reached unimaginable heights, shotgun has unfortunately been a major let down. Indian shotgun shooters have failed to win a single medal at an ISSF event in an Olympic discipline throughout the current Olympic cycle (though Ankur Mittal has impressed in double trap, which is now a non-Olympic event). One of the possible reasons for this is that rifle and pistol, especially at the rural level, have far fewer barriers to entry for youngsters. It is reasonably easier to set up a 10m rifle/pistol range in a village, than it is to set-up a large and secure shotgun range, besides the guns and ammunition also being cheaper. As a result, youngsters have tended to gravitate towards rifle and pistol, as opposed to shotgun. Further, trap events have also been hit due to the absence of a foreign coach. These issues would be at the forefront for NRAI as we move into the 2020s.

In terms of Tokyo, after the Rio debacle, there is a feeling among many fans that Indian shooters often do well in ISSF events only to falter at the big stage that is the Olympics. However, looking at the numbers, this is decidedly not true. While Ronjan Sodhi and Jitu Rai are definitely 2 shooters who failed to shine at the Olympics, other shooters have actually never had the results even in ISSF events that would make them the favourites at the Olympics. Of course, Indian shooting has had many medal contenders, but not really medal favourites. The only other Indian shooters who would have been classified as medal favourites going into an Olympics were Bindra, Narang and Rathore, all of whom have Olympic medals to their name.

However, in 2019, Indian shooting has shown astronomical numbers which are in a completely different plane from ever before. Thus, any comparison of the Olympic chances of the current lot with those of the past is an exercise in futility. The growth can also be seen at the domestic level, with the number of shooters appearing for the national championships increasing every year, having now reached into the thousands.

While the Olympics is still about 7 months away, many of our shooters will go into Tokyo as strong medal favourites, and the contingent would be highly disappointed to not return with our best ever medal haul, both in terms or number and colour. And, hopefully, a successful Tokyo would pave the way for a new decade in which Indian shooting would not just be aiming for 1-2 medals every Olympics, but would actually be looking to be at the top of the shooting medals tally.

Then again, the Rio scars still hurt. And, only glory in Tokyo can heal them.

Deepti Martolia is a yoga instructor who has been practising and has over a decade’s worth of experience in yoga. She is also the...
Read more
131,130FansLike
12,189FollowersFollow
7,157FollowersFollow