Player Speaks | Opponents should know they are up against world no. 1 – Amit Panghal 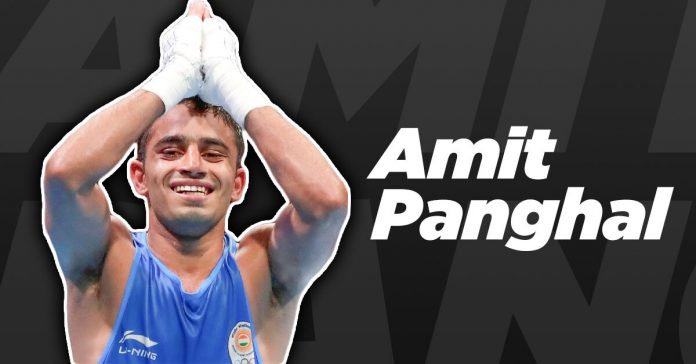 I knew this was long due! The fact that I have been ranked number one in the world gives me delight and also makes me think that I shouldn’t at any cost give away the position before the Olympics. The Indian boxing brotherhood has worked hard and paved their way to success. This ranking will be nothing if I don’t play like the world no. 1 at the Olympics. However, it gives us an advantage. It’s time that the world should take India seriously. We should capitalise on our opponent’s perception that they are up against the world no. 1.

If you ask me, I would say I never took up boxing intending to become the best boxer in the world. I was still this lanky kid, whom his brother almost dragged into the sport because he needed company while playing the sport. I was a mischievous kid pulling off some trick or the other and would keep by neighbours worried about me. My elder brother, Ajay had taken up boxing and one fine morning he decided he would introduce me to the game as well. I was 11 when I decided to tag along with him. My parents were a bit overprotective, thinking that I would hurt myself they initially had some concern. But grandfather, who was once a wrestler, passionately supported me. And thus began my journey.

We didn’t have any equipment and so I borrowed from my friends to train. But it was my brother who made the ultimate sacrifice. Like me, he could have been a professional boxer. Being from a farmer’s family, we didn’t have the means to support the training of both of us. Ajay made sure I fulfil my dreams, and for that, he joined the army so that he could pay for my training. I trained at coach Anil Dhankar’s academy in Mayna village in Haryana’s Rohtak district. I will always be indebted to my brother and my coach for what I am today.

In 2009, I won a gold medal in the sub-junior category in the national championship. Three years later, I converted the national medal into an international medal when I bagged a gold medal in Sri Lanka in 2012. My first stint in senior-level boxing was in 2016 where I bagged my first gold in the senior category in the national championship. One thing that has always worked for me is speaking to my brother and coach before going inside the ring for a bout. They lent me some tips on how to play and how to tackle the opponent. Even after my bouts, I discuss my shortcomings or whatever disadvantages I had so that I could make it up during my next bout. I do this thing religiously and no matter, even I lose a bout, their inputs have always made me a better player.

Only after winning the gold medal at the nationals, I realised it’s time to take my game to the next level and make my country proud. I learnt about the styles and strategies of the professional boxers of the world. Everyone spoke about the Olympic champion in 49kg category, Hasanboy Dusmatov. He is one fierce fighter. Before the Asian Games in 2018, I had played against him twice, and I conceded the bouts. The defeats were a part of my learning curve I believe and contemplating too much on my strategies against Dusmatov earned me the medal at the Asiad against him in our third fight. The win instilled confidence in my techniques and people started believing in me.

Boxing has been on the rise in India, and every boxer is accountable for it. If you see the numbers, since the Rio Olympics, Indian boxers have won medals in every big tournament they have played so far. The Boxing Federation of India has been a game-changer for India’s success if you see. In 2016., Santiago Nieva arrived as our coach. The first thing he did after taking the reign was changing our training schedule. He kept hammering his new schedule for a week, which created a trust between us. The changes he has brought and the disciplines he has made us adopt were really important and helped us do well. Besides, BFI ensured address our issues separately. Now under the BFI, we get a chance to go and train abroad, which was necessary to up our game if we had to take on the world-renowned boxers. We focus on one thing at a time and work on it, which has been key to the success of the Indian boxers. The fitness level is also at best and everyone has good camaraderie in the team.

I know I am probably the shortest boxer in the ring, but I have adapted myself with the condition from the very beginning since all my contenders have been taller than me. I am always prepared beforehand and know how to tackle them and pull off punches that would work well against them. I follow the usual in-out method when I am pitted against them. The key is to keep yourself free, which doesn’t allow them to have an upper hand on me. If I am close enough against a taller boxer they always cannot utilise their full force in punching, which often becomes an advantage for me the way I utilise the in-out technique.

The challenging moment of my career came in 2019 when I was asked to graduate my category from 49 kg to 52 kg. Initially, I had to face a lot of difficulty with the reach I had. Because already I was facing taller boxers than me, and when I shifted to 52kg, they were more powerful boxers. Coach Santiago gave me three months to get acquainted with the weight difference. After that, I performed well in the trials for Asian Boxing Championships. Only after winning the gold medal in the Asian Championships, I realised I have had a good transition. I worked on my power and was ready to take part in the World Championships. Most of my training now is power-based, which I think will work well in the Olympics.

The World Championship final was the biggest bout of my life and it was against the best boxer of our time. Though I succumbed in the bout, I realised I might not get a better chance than this. I realised he beat me with power, which still has an effect on my mind and it motivates me further to enhance my power.

Talking about my life in this COVID induced lockdown. I have never been home for this long time since I started my professional boxing career. Initially, the plan was to just keep myself fit. By now recently I have again started concentrating on my skill-based training. Once the training resumes, I will hit back and it will take at least two months to regain the place where I had left. BFI hasn’t given us a date yet when things will be okay and we will be ready to start our camp, however, at a personal level, we are trying our best to enhance our skills.

Apart from boxing, the other sport that is very close to my heart is wrestling. I follow Indian wrestlers very closely, and always been a fan of them. My grandad’s influence led me to go and watch fights in akharas. I even followed the Wrestling Pro League last year. Another cause that is very close to me is the condition of the farmers. Hailing from a family of farmers I know about their plight. You must have seen me vocal about their cause on social media. I know how much hard work goes on the field. They give their all to farming and often doesn’t get the adequate remuneration, which hurts to see. So I think that is the reason for me being vocal. If we, sportspersons, are seen as icons, we should be vocal and people will listen to us. We have worked hard enough to be at this position and our words can create a slight impact, which will help the country in the long run.