Punjab’s Sultanpur Lodhi resident, Gurwinder Kaur, is now an inspiration for many woman athletes of her region. While many would try to recall whether she is among the many women hockey players in the state, this Gurwinder is one of the prominent women Gatka aficionados in Punjab.

Dazed and confused about what Gatka is? For the uninitiated, it is a traditional form of martial arts, which is historically associated with Sikh Gurus and is popular among the masses as Sikh martial art. It is a style of stick fighting between two or more practitioners, with wooden sticks (called Soti) intended to simulate swords. It was one of the basic techniques of self-defence for Sikh warriors during the martial period of great Sikh Gurus.

Creating an amalgamation between acrobatics and swords fight, Gatka was introduced as a mean of warfare when the Sikhs were fighting the Mughal Empire during the late 17th century. The relatively violent form of martial arts, however, was banned when the British established their rule in India. They saw the practice of Gatka threat. With the ban imposed, the form of martial arts evolved from using the sword to become stick-based fighting, which helped the Sikhs to convince the British that it was no more an unsafe form of sport.

Gatka involves a series of combat training systems like duels and the use of weapons. An amateur progresses from bare-handed combat to using the Soti and Chakras. The form of martial arts is true to the principle of Sikhism “to use weapons only when other means have failed”. It teaches a person how to defend oneself and, above all, how to defend others.

The martial art, which was earlier exhibited in gurudwaras, nagar kirtans and akharas, now has been recognised as a sport category after the formation of Gatka Federation of India (GFI) in 2008 and is played by trained Gatka players at the national level. The National Gatka Association of India (NGAI) and Gatka Association Punjab, under the aegis of World Gatka Federation (WGF), Asian Gatka Federation (AGF) and International Sikh Martial Art Academy (ISMAA), have taken major initiatives for its revival and promotion by putting this rare martial art into practice as a sport in India and worldwide.

Gatka received a major boost when the Punjab Government included it in the gradation list of recognised sports enlisted in the state sports policy in 2015. This move led the players to avail all facilities, including reservation of three percent quota in all posts and admissions. Today, even there are several academies in Punjab that teach gatka, and some of them are also offering a proper diploma degree. However, there are no coaches for the sport in government schools in the state.

Gurwinder’s recently entered in the India Book of Records for spinning Gatka Chakkar 118 times in one minute on and by performing rope jumping 63 times in one minute while spinning the Chakkar. The 38-year-old has done a post-graduate diploma in Gatka, who had been performing this art since she was in Class VIII and had learnt skills from her grandfather Sohan Singh.

The sport though found its presence in the National School Games in 2014. But after remaining the part of the national games for three years, the sport was removed in 2017. The sport is not limited to the Sikhs in Punjab, it has also gained its fair share of popularity in Haryana, Rajasthan, Bihar, UP, Maharashtra, Delhi, Gujarat, and Jammu & Kashmir.

Not only in India, today gatka competitions take place in around 30 countries, across the world, including the US, Canada, the UK, New Zealand and Australia. The Sikh community has been relentlessly trying to promote this sport with the aim of getting it into the Olympics one day.

In professional tournaments, each team has to show 24-25 routines in a span of eight to 12 minutes. The Sotis can’t fall on the ground or come in contact with the feet, and each weapon must be targeted at a specific part of the opponent’s body. For example, the Soti must be aimed at the throat of the opponent. Target any other part of the body and get a penalty. The size of the Soti has to be equal to opponent’s gatka as even a half of an inch longer stick could give an edge to the wielder which is considered foul play in the game. Though there are several risks associated with the game, it elicits a sense of discipline and respect among opponents. Though, gatka is practised across the globe, it strives to keep its rich heritage alive. 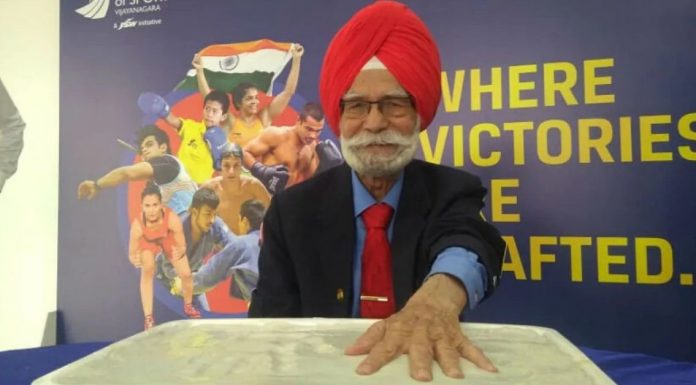 Press Trust of India - Modified date: May 25, 2020
Olympic hockey gold medallist Gurbux Singh on Monday rated legendary Balbir Singh Senior as India's best ever scorer and someone who inspired him in his early days. The three-time Olympic gold medallist Singh died this morning at a Mohali hospital at the age of...
Read more