The director of Saina Nehwal's biopic, Amol Gupte took to social media last night in order to clarify the idea behind the 'Saina' movie poster that was the butt of all jokes due to its ‘unrealistic depictions’. He lashed out at the speculation and the false news that was being portrayed in light of the poster and was certainly aiming his message at trolls. He offered an explanation which mentioned that the hand with the tri colored sweat band is someone who aspires to reach the level of Saina. 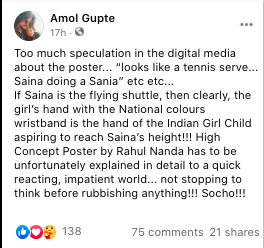 It had a double meaning which was meant to engage the audience with the idea behind representing India and working hard to achieve new heights with absolutely nothing being mentioned about a serve or a badminton pose. He ended his post by mentioning the creator, Rahul Nanda who designed it with the brilliant concept. Moreover, he lashed out at the fact that a poster seemingly had to be explained to people who did not think twice before making assumptions.

It was only a few hours after the first glimpse of Saina Nehwal’s biopic that Indian social media was flooded with fact checkers pointing out flaws. The main target of course was the poster of the movie that depicted a shuttlecock and a tennis serve action. It appeared to be a toss of a ball which takes place in tennis prior to the serve and had no relation with any rule in badminton whatsoever according to several twitter users. Jokes and memes were making the rounds with tweets ranging form the invention of a new serve, to how a tennis fan would have been behind the idea to make the poster.

The movie has Parineeti Chopra in the lead who has also been training for several months in order to fit into the role. It is all set to be released on the 26th of March.