The Bridge takes a look at the top ten women who have relentlessly knocked on the door of glory and never settled before clinching it. 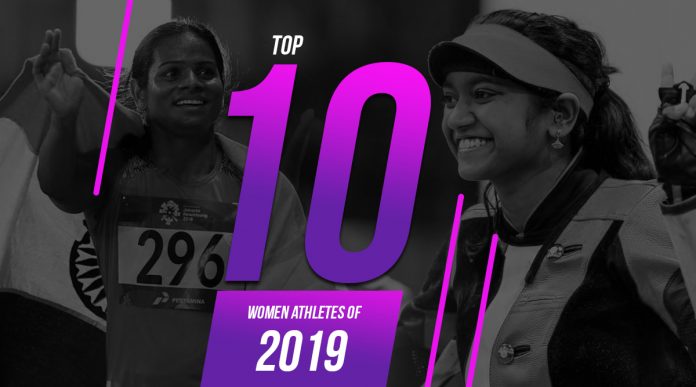 The aspect of sidelining women in most fields has taken a most definite backseat in the world of sports as the Indian women continue to smash records and create history. The year of 2019 has seen some spectacular performances from the women as they went out of their way to script a narrative of success for themselves in a country still dictated by patriarchal trends. The Bridge takes a look at the top ten women who have made the year a memorable one in the arena of sports as they relentlessly knocked on the door of glory and never settled before clinching it.

For Hyderabadi ace shuttler P V Sindhu it has been a marvelous first half of 2019 as she etched a new record for herself and the country when she laid her hands on the elusive gold medal at the BWF World Championships. Having eyed the crown of becoming the World Champion, Sindhu exhibited a powerful form and looked formidable against old foe Nozomi Okuhara of Japan to claim the title for herself. Sindhu put up an impressive performance that had Okuhara grappling for points in vain.

Bagging the World Championship crown, Sindhu’s form had dipped with early-exits in the next six tournaments. Save for a quarter-final finish at the Fuzhou French Open 2019, Sindhu’s pinnacle moment of the year came on August 25 in Basel. Sindhu has laid down a record of winning medals at every World Championships, the exception being of 2015. A recipient of both Rajiv Gandhi Khel Ratna and Padma Shri, Sindhu became the second woman in the world to win five or more medals at the World Championships.

One of India’s top wrestlers, Vinesh Phogat has brought laurels for the country from international competitions in and around the world. She bagged a maiden World Championship medal in 2019 in the women’s 53kg category after pinning Maria Prevolaraki in the bronze medal match. She became the first Indian wrestler to qualify for the Tokyo Olympics 2020 by virtue of her top-six finish. The first Indian woman wrestler to win gold in both Commonwealth and Asian Games, Vinesh next aims to gun for a greater glory at the Tokyo Olympics next year.

The star fencer of India, Bhavani Devi was born into a middle-class family in Chennai, Tamil Nadu. Her father was a priest and her mother a homemaker. Beginning her fencing career in 2003, Devi has achieved the heights in her career when she won a silver medal in Ghent (Belgium) in October 2019. She is hopeful for qualifying for the Olympics although she has a lot of tournaments lined up till end-March 2020 to guarantee her entry. Earlier in the year, Devi bagged the bronze medal in the women’s Sabre category of the Tournoi Satellite fencing tournament Reykjavik, Iceland. The 26-year-old Indian finished joint third alongside Hong Kong’s Au Sin Ying, with two points.