The seven youngsters who will have a breakthrough 2020

The Bridge foretells the tale of seven youngsters who are due to have a breakthrough this year and scale higher rungs of glory in 2020. 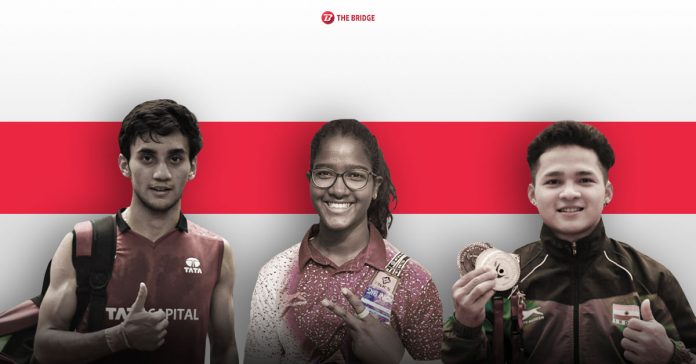 Having bid our farewell to the past decade, we have stepped into a brand new year which, at the outset, promises to be an exciting journey. The year of 2019 has already shown us the trailer of the sporting superstars for tomorrow and 2020 promises to deliver a better picture of them as they take on the world stage.

India has produced a fine crop of young talent who are speeding towards glory and ensuring that the country’s future rests on safe hands. Taking 2019 to be a determining year, we can easily survey the spectrum of players who showcased some outstanding and rave performances and predict the course for an even bigger and better 2020 for them. The Bridge takes this opportunity to act as a seer and foretell the tale of seven youngsters who are due to have a breakthrough this year and scale higher rungs of glory in 2020.

Few could doubt the amount of talent that the 18-year-old Lakshya Sen possesses, having crowned himself as the Asian Junior Champion in 2018 to bagging the silver medal at the Youth Olympics 2018 and an enviable bronze medal win at the World Junior Championships 2018. For Sen, the year of 2019 served as a perfect transition year with him graduating to play in the Senior level matches after finally abandoning the Junior phase.

The Almora-born Sen has been showing sparks of brilliance throughout and for an 18-year-old, he can boast of having a rare calm and steely composure when it comes to tense situations in matches. Reaching an all-time career-high ranking of World No. 32, Sen played a spectacular season in 2019 and delivered standout performances. The student of Prakash Padukone Badminton Training Academy joined forces with former World No. 1 Morten Frost to train in Denmark for a brief period which gave him the necessary boost in performance. A revamped Sen stormed into the Senior circuit in the latter half of 2019 and oozed sheer confidence en route to bagging five titles.

Collecting his first title at the Belgian International, Sen went on to win the Dutch Open, the SaarLorLux Open and raced on to win yet another International Challenge title at the Scottish Open. Sen finished his career-best season on a high when he participated as the top seed in the Bangladesh International and took home a fifth title for the year. With such a spectacular 2019 to look back upon, Sen, who became the youngest Indian men’s singles player to break into the Top 40, will surely be eyeing the Top 15 slots and given his resilience, he will a force to reckon with, this year more than ever!

Staying true to the spirit of his name, Ronaldo Singh shot into overnight fame in 2019 when he clinched the gold medal at the Asian Track Cycling Championships which took place at Incheon in South Korea. The medal came in the Junior Keirin event.

Track cycling has really been on the rise over the past few years and the 17-year-old Ronaldo Singh is partly responsible for it alongside Esow Alben also. Singh also created an Asian cycling record when he showcased glimpses of his dominance at the velodrome at the Indira Gandhi Indoor Stadium.

Ronaldo raced to an inimitable glory as he broke the Asian record of men’s junior 200m time trial event in the qualifying stage. He then clocked an impressive 10.065 seconds and beat the previous record by Liu Qi of China, with a timing of 10.149 seconds in 2018. Singh has been the talking point in the cycling world and the year 2020 is already bringing in good tidings for the young lad as he has become the World No. 1 in all junior sprinting events in the UCI rankings.

The boy from Manipur has really hogged the limelight in 2019 and is already promising to do so this year with a boost in the rankings already taking place. This year should pan out to be more exciting for the young cyclist who is veering to take on the world.

All of 17, the sprightly archer Komalika Bari from Jharkhand shot into the limelight when she created history by becoming the third Indian to win the gold medal at the World Archery Youth Championships 2019 held in Madrid, Spain. Komalika had started her training with the basic Indian bows (read bamboo bows) and continued that for four years before switching to recurve at the Tata Archery Academy (TAA) in 2016. The transition has been smooth for the talented archer and she has gone on to make the country proud on several occasions.

At such a tender age, Bari has followed in the footsteps of her cousin brother, who is also an archer and started training under coaches Dharmendra Tiwari and Purnima Mahato. After Deepika Kumari’s 2009 win of the gold medal at the Youth Championships, it was Bari who jinxed the medal drought with a win at the U-18 Recurve Women’s Category. Not only that, but Bari has ensured herself spots on the Indian side for elite events including World Cups in Turkey and Germany, the World Championships in the Netherlands and the Olympic test event in Tokyo. 2020 promises to be incredibly exciting for the young archer as she trains her eyes towards Tokyo 2020, eager to hit the bull’s eye.

A notable discovery of the year is definitely footballer Sumit Rathi who has taken long strides to become a key player for the Athletico de Kolkata (ATK) side where he plays as the central defender. Rathi has really grown to play a pivotal role in several matches during the ISL season.

The Punjab-born Rathi has shown a lot of promise and shades of brilliance in his outings this year. Being such a young player, Rathi, owing to his ball skills, has been put into the milieu of senior players that comprise the ATK team. Earlier, Rathi played for the ATK Reserves but his talent for the game brought him into the senior level. The transition was very smooth for a passionately crazy football player who knew from age 10 what he wanted to become.

Besides breaking into the senior side, Rathi has also proved himself vital in the Indian U-19 national team. A part of the squad for the U-17 World Cup, Rathi conceded that the landmark event ‘gave a huge boost’ to his career. Now, of course, Rathi is a regular member of the U-19 Indian team. Rathi, with his calm composure, can handle pressure situations well as the center-back can score goals, even when the clock is running against him. The future looks bright for Rathi as he is knocking on the doors of entering the national team and could be a great choice for defense and is currently, one of India’s brightest prospects currently.

Touted to be the next-big-thing in the world of Indian wrestling, Haryana’s Anshu Malik has been enjoying a tryst with the most elite of events on the circuit. The 18-year-old wrestler is a two-time Asian Cadet Championship medallist. She is also the Junior Asian champion in the 57kg category.

While Indian juniors have no shortage of domestic wrestlers – both male and female to idolize, Malik had always been drawn to the legendary greats of Japanese pantheon. While she has deemed her role models to be mostly foreign, Malik followed a typically Indian path to the wrestling mat. Her uncle Pawan represented India in the SAFF Games, while her father Dharamvir was a wrestler with the CRPF before retiring in order to better support his daughter.

Anshu Malik started the new year on the right foot when she knocked out World Championship medallist Pooja Dhanda to seal her place in the Indian team for the Asian Championship. The bronze medallist at the World Wrestling Championships in 2018, Anshu has a bright year ahead to look forward to as a series of tournaments are lined up for her to conquer!

The 17-year-old star of weightlifting has been smashing records on a spree of late and 2019 served as the year which pushed him to the limelight. A gold medalist at the Youth Olympics, Jeremy Lalrinnunga went on a record-breaking rampage when he claimed three world marks in an outstanding performance en route to bagging a silver in the men’s 67kg category at the 6th Qatar International Cup in Doha.

The 17-year-old from Mizoram shattered his own Youth World and Asian record in snatch, clean and jerk and total lift with an effort of 306kg (140kg+166kg) to win the silver medal. Lalrinnunga is also the first Indian weightlifter to win a gold medal at the Youth Olympics and has his eyes set on Tokyo 2020 for which he hopes to qualify. Taking his father, a former junior boxing champion, to be his inspiration, Jeremy has big dreams in his eyes.

The boy from Aizawl, broke 27 records in total all under his name, combining national and international marks. Other than that, Jeremy also took down 12 international records which include three youth world, three youth Asian and six Commonwealth records, and 15 national records which comprise five youth national, five junior national and five senior national records. The teenager from Mizoram began 2019 by winning a silver medal in the EGAT Cup, lifting 131kg in snatch and 157kg in clean and jerk. With such an impressive outing, 2020 only looks more exciting for the young boy who is determined to qualify for Tokyo. If Jeremy makes it to the Olympics, he stands a good chance in bringing back a medal for the country, given his gritty form.

Among the rising stars in wrestling, perhaps Deepak Punia shines the brightest currently after having broken an 18-year-long hiatus and crowning himself as the Junior World Champion in Talinn, Estonia earlier during the month of August. Punia has soared into further glory and has been given the tag of ‘Junior Freestyle Wrestler of the Year’ by the United World Wrestling organization.

Ranked at No. 1 by the United World Wrestling organisation currently, the 19-year-old is going to shoulder the hopes of the country when he goes to Tokyo 2020. Although he qualified for the finals at the World Wrestling Championships in Nur-Sultan, Punia had to opt-out of the bout owing to an ankle injury whereby he had to settle for a silver medal. However, nobody can doubt Punia’s status as the rising star of the wrestling world. Having already booked an Olympic quota for himself, the young wrestler is raring to have a go at the Olympics and something tinkers and suggests that 2020 will be the year for another Punia to shine.