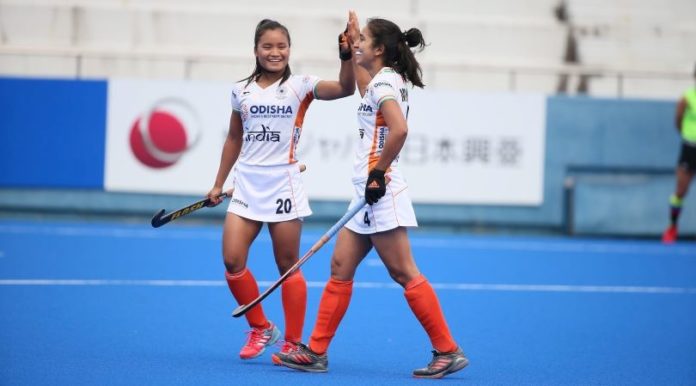 The Indian Women’s Hockey team qualified for the Semi-Final of the FIH Women’s Series Finals Hiroshima 2019 as they beat Fiji by an impressive score-line of 11-0 in their third and last Pool A match here at the Hiroshima Hockey Stadium on Tuesday.

The match saw World No. 9 Indian team dominate their lowly ranked opponents throughout the match, allowing them to only have one circle entry in the entire 60 minutes, whilst making 74 entries into Fiji’s striking circle.

The first quarter was dominated by India which saw them take the lead in the 4th minute when Lalremsiami’s cross-field ball was deflected by a Fiji Defender into the back of the net. Captain Rani scored India’s second goal in the 10th minute as she struck from a Penalty Corner. The next minute saw Neha Goyal, run from the left flank and then assist a great goal for Monika to make it 3-0. Forward Vandana Katariya scored only her second goal of the competition when she struck in the 12th minute. Gurjit Kaur also registered her name on the score-sheet as she converted from a Penalty Corner in the last minute of the first quarter to see India hold a 5-0 advantage.

19th minute saw Gurjit Kaur’s drag-flick being stopped by the Fiji Goalkeeper Ro Lavenia Ratumaimuri on her left side, but the Indian Defender was quick to convert in the same minute through another Penalty Corner as she slotted home in the left bottom side of the goal to make it 6-0. Two minutes later, Gurjit Kaur completed her hat-trick of goals as she scored on the rebound with a reverse stick after her drag-flick was blocked by a defender. It was a quarter that belonged to the Indian Defender as she scored yet again in the 22nd minute from a Penalty Corner to make it 8-0 in India’s favour. Fiji managed to survive the last few minutes of the second quarter without conceding another one.

A splendid shot on the reverse stick from just inside the circle by Lilima Minz saw her shot fizz into the back of the net to give India its 10th goal of the match in the 51st minute. Six minutes later, it was Forward Navneet Kaur’s who pounced from a loose clearance by the Fiji Goalkeeper as she registered her name on the score-sheet by scoring to make it 11-0.

Indian Chief Coach Sjoerd Marijne rotated his players throughout the match, which meant that the likes of Nisha, who made her debut in the first match of the FIH Women’s Series Finals Hiroshima 2019 against Uruguay, was involved throughout the match. Despite the vast gap in the scoreline, India never looked to drop gears, constantly haranguing, and attacking in numbers till the last minute. India’s chances throughout the match came through the centre and right flank positions, as World No. 44 struggled to keep up with the Indian attackers, which meant that India won the match by an impressive score-line of 11-0.

India next play the Semi-Final of the FIH Women’s Series Finals Hiroshima 2019 on Saturday, 22 June 2019.