Top seed PV Sindhu staved off a gutsy fightback from Assam’s wonderkid Ashmita Chaliha to enter the final at the Yonex-Sunrise 83rd Senior National Badminton Championships 2018-19, here on Friday. The two-time champion had to claw her way back from 16-19 down in the second game and needed two match points to douse the challenge of the spirited fourth seed Chaliha 21-10, 22-20.

The 19-year-old girl from Assam had already announced her arrival last year with BWF titles at the Dubai International Challenge and the Tata Open. On Day 4 of the Senior Nationals, she gave yet another display of her immense talent when she steadied her nerves and got back into contention from an 8-13 deficit in the second game.

Egged on by the motley crowd, the fearless girl drew level at 13-13 and jumped into a 17-14 lead against the Rio Olympic silver medallist before advancing to 19-16. That’s where Sindhu’s vast experience came in handy and she evened the score at 19-19 to have a match point at 20-19.

But the resilient Ashmita was not done yet and she saved the first match point only to see her World No. 6 opponent wrap it up on her second in 38 minutes.

In the other semi-final matches of the day, Rohan Kapoor and Kuhoo Garg lived up to their reputation as the top seeds in mixed doubles. The World No. 46 pair needed only 32 minutes to dispatch Vighnesh Devlekar and Harika V 21-15, 21-16 to enter the final.

They will take on the unseeded combine of Manu Attri and Maneesha K, who continued their rampage with a fine 21-18, 21-17 win over Shlok Ramchandran and Mithula UK.

In women’s doubles, top seeds Meghana Jakkampudi and Poorvisha S Ram continued their quest for the title with a strong 21-13, 21-16 victory over Kuhoo Garg and Anoushka Parikh. They will take on the unseeded Shikha Gautam and Ashwini Bhat K in the summit clash after the latter edged Aparna Balan and Sruthi KP 21-19, 24-22.

Earlier in the day, defending champion Saina Nehwal and former winners Parupalli Kashyap and Sourabh Verma all emerged victorious in their respective quarter-finals.  The second seeded Nehwal was hardly ever tested in her 21-10, 21-10 victory over Maharashtra’s veteran shuttler Neha Pandit and needed just 24 minutes to complete the match.

Nehwal’s husband, Kashyap, the men’s singles third seed and 2012 winner, too was equally impressive in his 21-18, 21-16 win over 21-year-old Bodhit Joshi. But the star of the day was former two-time champion Sourabh Verma. 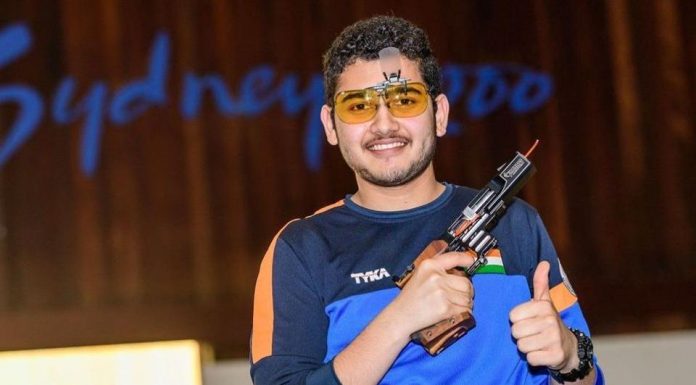 Press Trust of India - Modified date: June 3, 2020
Emboldened by the success of the international online shooting championship, the brain behind the initiative will now try his hand at hosting it in a league format over a one-month period, with top foreign players taking part. It will be the first ever online league...
Read more