If you take a local train to Sealdah, Kolkata, on an afternoon, there is a chance that your ticket will be examined by an Asian Games gold medallist – Pinki Pramanik. Not just any medallist, but someone who had once been hailed as the next PT Usha, before being ostracized and hounded out of her sport on the basis of an unfounded claim.

Pinki Pramanik has been through hell after being promised heaven, but even now she dutifully lends her service to the nation – one stamp on a ticket at a time.

“It happens more than once everyday that a commuter recognizes me. What’s surprising is that I’ve never had to face any abuse. They speak with love, they tell me they’re by my side, that I should restart my career,” said the 32-year-old Pinki.

“I can’t say that it makes me completely happy because it’s always at the back of my mind that they might have seen my MMS, that they might be trying to make me feel good. But it still makes me cheerful when a person walks up to me because I was an athlete, and not because I am a ticket checker,” she added.

Twelve years ago, 20-year-old Pinki Pramanik had brought home gold from the Asian Games as part of the 4×400 women’s relay team — the only gold for India in athletics at the 2006 edition — and a Commonwealth Games silver — the best ever finish at the CWG for any Indian relay team as of then. The path to immortality for the girl from Purulia had seemed to be set in stone.

“The first time I thought I could be an athlete was when I stood third at a school race in Class IV. They gave me a tiffin box as prize. It was the first time I had won anything and I cannot express the happiness that I felt. TVs were the new rage in my village then and I saw the 2000 Olympics on TV and thought maybe I could appear on TV if I ran well,” recalled Pinki.

“I started to wake up at 3 am, open the door of my house with as little noise as possible (my parents were against me physically exerting myself) and practise in a nearby field. Practice for me then meant running for the joy of it of course. When I was sent on an errand to a shop, I would run and reach there, thinking that was practice. Of course, people in my village used to gossip about the girl who was running. My mother especially had to hear a lot of talk,” she said.

However, Pinki’s unconventional methods of practice seemed to pay off

She said, “People started supporting me when I started winning regularly. The gossip decreased. Sometimes when I used to practise at night, one or two friends used to join me. The more I ran, the more I won and the more support I got.”

Pinki would indeed become an icon in her village but her dream of appearing on TV at the Olympics would always remain unfulfilled. Instead, she would make national headlines and trend on Twitter as the member of India’s women’s relay team who had allegedly raped a woman and lived her life in the guise of a woman despite being a man, according to the police complaint lodged against her.

Both the allegations have since been disproved in court, but they left a stigma on Pinki which nobody seemed comfortable to handle. Those who had till then rallied around Pinki as one who could take Indian athletics to new highs turned their backs on her and indulged in snideness, also speculating if a way could be found for India’s other relay team members to retain their medals.

“When I look back on my career, a day in 2008 is what I am reminded of the most. I was competing at a national meet in Kerala. I stood first in the heats. Then, just as I was about to take the field for the semi-final, they told me I would not be allowed to race,” she said.

A long pause later, she added in a broken voice, “The Santhi Soundarajan case happened.”

Considering the harassment Pinki Pramanik was made to go through to prove her gender — involving being manhandled by policemen on live TV channels, having a video of her ‘gender test’ being leaked on the internet, being kept in the men’s lock-up, apart from being unofficially disqualified from all races — her description of her six-year ordeal as ‘the Santhi Soundarajan case’, a reference to one of her contemporaries who faced a similar trial, is one that might strike as effacing. It is not.

“Not one person stood by me then. I won’t speak ill of my coaches, but I have always wondered why the athletics federation made no statement about me. All I wish is that when something like this happens again, those inside the system are strong enough to protect athletes. If sports is what someone loves, they should not be barred for things that are beyond their control. I know the agony of being made to leave the field in disgrace, I would not wish that upon anyone,” said Pinki.

The supposed closure to Pinki Pramanik’s ordeal came in 2014 with the Calcutta High Court exonerating her of all charges, but by then she was 28 and the best years of one of India’s most promising athletes had been lost to whataboutery.

The Bengal runner said, “I was following Mohammed Shami’s case and it brought back bad memories of being at the mercy of Kolkata Police. None of the policemen who harassed me or the hospital authorities who ‘tested’ me were punished. Wasn’t uploading my MMS a crime? Police said they could not locate any suspects. Where did they go, those who did it? Shouldn’t more people be talking about how an athlete could be humiliated like this?“

“You can’t ever forget such an episode. Memories from then often haunt me. Why did the police behave like that with me? I still think of it sometimes,” she added.

The concluding chapter of Pinki’s athletics career played out just before the 2016 Rio Olympics. At the Olympic trial race Dutee Chand first broke the 100-metre national record and earned herself the reputation of being the country’s fastest woman, Pinki was the one who brought up the rear. She was the only competitor at that race who was in her thirties.

In a way, her appearance was an assertion that the track — from where she had been barred for the best years of her professional life — was where she belonged.

“The biggest difference I found during my attempted comeback was the respect and love shown towards me by the other athletes. Dutee Chand, Srabani Nanda, Himashree Roy and many others approached me and told me how I had been an inspiration for them. Whereas in my prime, my competitors saw me as just someone who needed to be beaten,” said Pinki.

“I attempted my comeback in the 100m because I had been off the circuit for a long time. I had plans to gradually move on to the middle distances like before, but I didn’t get leave from work,” she trailed off.

Asked to predict India’s fortunes at the upcoming Jakarta Asian Games, Pinki said, “Hima Das looks set for a medal. Maybe one of the relay teams as well. That’s it I think.“

Then, as one of the loneliest people in Indian sports prepared for another day at one of India’s busiest railway stations, she said in parting, “I like to see people happy, so I often get too involved in their lives and trust them blindly.”

“Maybe that’s why it turned out this way.”

She had won India's only gold in athletics at the 2006 Asian Games. Then at the age of 22, she mysteriously 'retired'.Now, after a decade, The Bridge uncovers the story of Pinki Pramanik as she asks why those who humiliated her were never punished.Read the story here: https://bit.ly/2n8Kdkm

With sports around the world shut down by the coronavirus pandemic, the World Anti-Doping Agency is looking to artificial intelligence as a new way...
Read more
Athletics

For star sprinter Hima Das, the two months of coronavirus-forced national lockdown was not all about confinement inside her room at NIS-Patiala as she...
Read more
Athletics

After waiting for over two months owing to the lockdown, top Indian athletes and weightlifters were supposed to resume outdoor training at the National...
Read more
Athletics

Eliud Kipchoge was already famous but became increasingly well known for being the poster boy who set the world record in October 2019. He...
Read more
Athletics

Track and field athletes to start outdoor training on Monday

Track and field athletes will return to outdoor training on Monday after two months of being confined to their rooms due to the coronavirus-forced...
Read more
Athletics

With the Tokyo Olympics postponement, the road to the event is wide open for her. She is now desperate to get on the field...
Read more
130,898FansLike
12,125FollowersFollow
7,143FollowersFollow 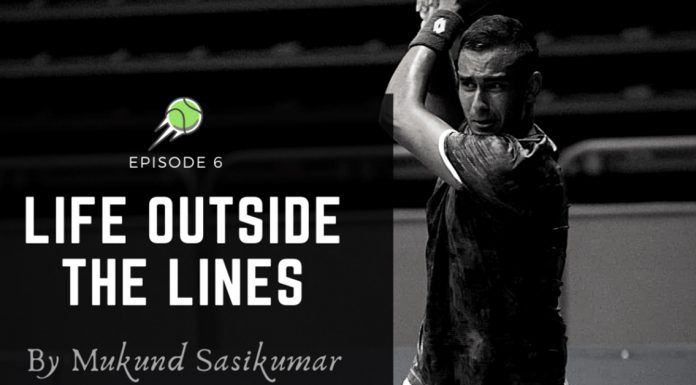 Mukund Sasikumar - Modified date: May 23, 2020
“Life Outside the Lines” is a new weekly column in collaboration with one of India’s promising Gen Next player, Mukund Sasikumar. With candid honesty, he shares his thoughts from a player’s perspective. Read the previous episodes here – Episode 1 – Expectations Episode 2 – Anger Management Episode 3 – Parents...
Read more