“It doesn’t matter what your background is and where you come from, if you have dreams and goals, that’s all that matters.” – Serena Williams

The eighteenth Asian Games are currently running their Fifteen-day course in the Indonesian cities of Jakarta and Palembang. Over the first Twelve days, the Games have thrown plenty of surprises our way. Displays of sportsmanship, moments of courage, nail-biting finishes, and giant killings; this version of the pan-Asian games have had it all.

One of the more consistent themes of any big sporting event, such as the Asian Games, is the story of those who compete in it. People who leave everything on the line for those few precious minutes on the podium.

Some of these sportspersons are from the humblest of backgrounds and have fought hardships all their lives to reach this point. As a result, when their stories come to the fore, they provide us with a different perspective into such competitions.

Remarkably, it is an everyday a trend in India, which most of our sportspersons tend to be from a modest background. Upon closer inspection, one would find this not to be a coincidence. Instead, it is a consequence of the widespread mentality in our country, which deems sports more as a hobby than a profession.

Still, there are those few brave souls, who regardless of being from the simple of beginnings, put everything on the line. Below are the stories of some of these heroes.

When Tajinderpal Singh Toor threw the shot put over 20.75m, he broke the Asian Games Record. The 23-year-old also confirmed for himself, a Gold medal. Elsewhere, his father laid on the bed, as he watched his son do the remarkable. Tajinderpal was born the village of Khorsa Pando in Punjab. From an early stage, the youngster showed an inclination towards sports. Perhaps his love for sports came from his father, who used to compete in Tug-of-War competitions. However, as the Shot Putter began to grow, so did his expenses. New shoes, new equipment, health supplements; all were needed for Tajinderpal to follow his dream. Things got even worse when his father, Karam Singh, developed stage four cancer.

At that point, the Indian Navy stepped in. The youngster got employed in their services, and in return, they agreed to pay all his expenses.

Earlier this week, Tajinderpal threw a record-breaking throw with the whole of Asia watching. He dedicated the subsequent Gold medal to his father.

Dushyant Singh was the talk-of-the-town a few days ago; not because of his medal but because of the way he won it. The 25-year-old rower finished the race in the third position with High Blood Pressure, earning plaudits all over the country.

Twenty-five years earlier, Dushyant was born into a family of farmers. Growing up, it is likely that he never even heard about Rowing as a sport. That changed, however, when he joined the Army.

The rower began plying his current trade in 2012. Within two years, he had won an Asiad medal as well, finishing third in Incheon. He added to that tally a few days ago, when he won the Bronze medal in Jakarta.

Dutee Chand was born in a ‘below poverty line’ family of weavers, in Jajpur, Odisha. As a result, the first challenge she had to face in her life was to make it a better one for herself and her family. Her second challenge came later when she had to prove to the world that she did not do anything wrong.

In 2014, the sprinter was found to be having raised testosterone levels in her body. It was indeed a rare condition, seen in female athletes all over the world.

“The Testosterone levels in my body were found higher than usual, and as a result, I was banned from running competitively. Of course, I wasn’t the only athlete who was affected by this. Several others were with me,” Dutee wrote in her column at The Bridge. Nevertheless, she was banned for two years.

However, Dutee fought yet another battle to regain her right to compete. She did so at this year’s Asian Games, where she won the Silver medal in both 100m and 200m.

As with a lot of Indian sportspersons, Swapna Barman rose to fame almost overnight. However, it was not due to her performances in the Heptathlon. Instead, her popularity was due to a picture floating around, which saw her compete despite having a bandage on her face.

Behind Swapna’s overnight fame, however, were years of hard work and pain.

The Heptathlete was born to Panchanan and Basana Barman in 1996. Her mother worked on a tea-estate, while her father was a rickshaw puller. Moreover, she was born with six toes.

Also read: Extra toe and toothache not a barrier for Swapna Barman

In 2013, Swapna’s father suffered a stroke, which left him bed-ridden. As a result, the family’s finances dwindled. The athlete then took up the responsibility of the house and provided for her family while working through the pain barrier.

She still looks after her family, helping them build their life back. They must have been proud to see Swapna win the Gold medal on one of the biggest stages in the world.

Neeraj Chopra is the man-of-the-moment.

The youngster was India’s flag-bearer at this year’s Asian Games. He also stole the show by destroying his competition in Men’s Javelin. Such was Chopra’s domination that his worst throw ended up being more than the Silver-medal one.

Chopra, however, had humble beginnings as well. The Javelin Thrower was born into a family of farmers. His father worked on the fields, while his Mother in the home. He had two sisters as well that made up the household. Lack of funds saw him learn the basics of Javelin via Youtube, instead of formal training.

Nevertheless, once his talent was spotted, he quickly rose through the ranks and is currently one of India’s most prominent sporting prospects.

“Archery is an expensive sport, and there were moments when I thought my parents were spending too much on me. But my father would say, ‘When you’re trying to achieve something big, we shouldn’t worry much about finances.’ He would just ask me to focus on the result,” Vennam said in an old Deccan Chronicle interview. It was this family support, which let the archer continue in her field. Vennam’s family even shifted from Guntur to Vijayawada, to give her access to better sporting facilities.

With the support of her family, the Indian archer rose to new heights. She was a part of the team that proved to be Indian archery’s saving grace, by winning the Silver medal.

Also read: Jyothi Surekha Vennam is focusing on hitting the bulls-eye in the Jakarta Asian Games

The first Gold medal for India at the Eighteenth Asian Games came from a familiar yet surprising source. While many wagered that it would be Shooting which would open India’s medal tally, none would have imagined the Shooter responsible.

After all, Saurabh Chaudhary is just 17! 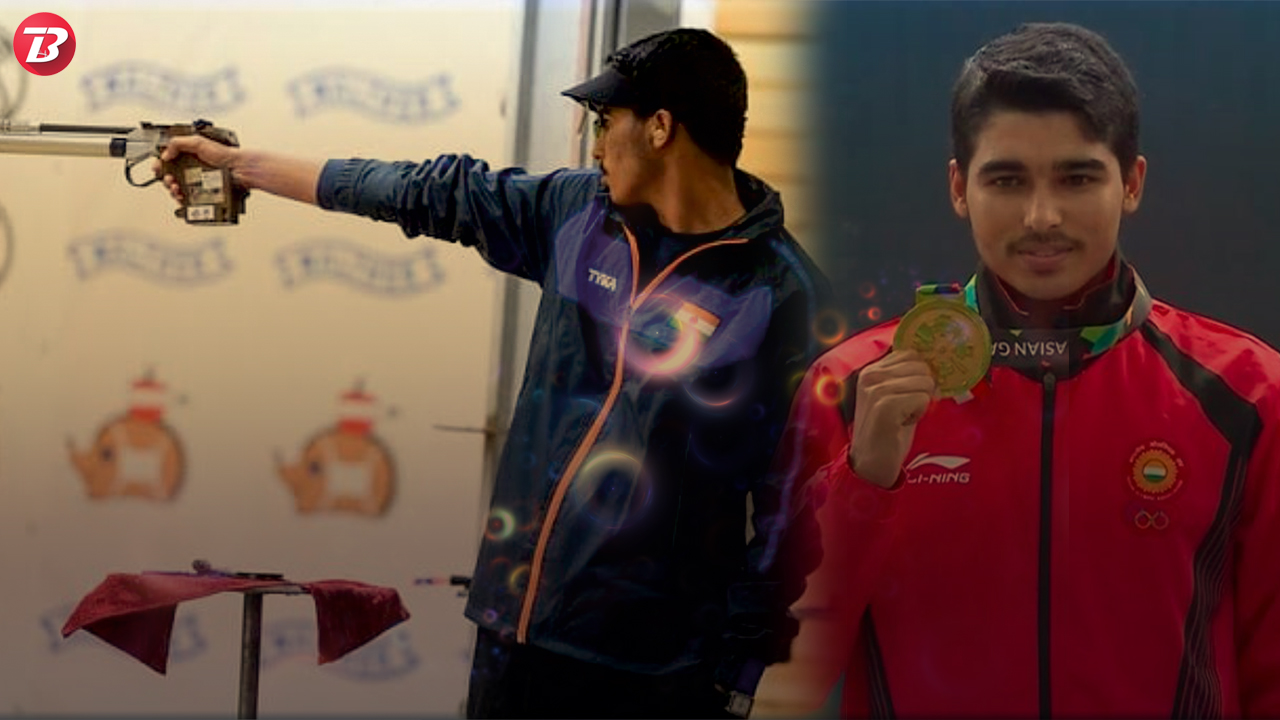 The youngster hails from a farming background as well. His father, the primary source of income in the family. When the youngster is not training, he helps in father in the field. Discipline and a steady hand is something he has acquired from this.

Those two attributes proved to be essential, as Saurabh shot his way to the Gold medal. While nobody would have been expecting the youngster to do so then, they won’t be making the same mistake in the future.

17-year-old Divya Kakran is a force to be reckoned with. The youngster has fought the world over and won on several occasions. The wrestler comes from a North Delhi family. Her father sells Langots, while her mother does the sewing work. Things have been tight for the Kakran family.

However, situations eased up when Divya started competing professionally. She and her father toured the country, winning several competitions. As a result, the young wrestler was bestowed with several cash prizes.

Nevertheless, as with any sportsperson, Divya’s aim was never the mone. Instead, it was the glory of winning an international medal. She did so when she won the Bronze in her weight category.

As is the thing with sports, they prove over and over again that one doesn’t need an extravagant background, to be a champion. All they need is the dedication, hard work, and the hunger to win.

The athletes mentioned above fall under that category. Rising from the humblest of backgrounds, they are now standing at the top.

In a major boost, India's middle and long-distance runners will get an Australian coach by the end of March, according to a report in...
Read more
Athletics

Indian sprinter Dutee Chand has made it official that she is going to represent her university Kalinga Institute of Industrial Technology (KIIT) in the Khelo India University Games starting 22 February.
Read more
Athletics

In a "landmark" decision by the Anti-Doping Disciplinary Panel of the NADA, Haryana's Amit Dahiya has been banned for four years for...
Read more
Athletics

Tokyo Olympics-bound Bhawana Jat was on Monday named in a 13-member Indian team for the Asian 20km Race Walk Championships, to be...
Read more
Athletics

Srinivasa Gowda, the Kambala jockey, who impressed by running a distance of 145 metres in just 13.62 seconds, will not be attending...
Read more
Athletics