Graham Reid’s boys will not be seen in action at the Men’s FIH Pro League 2020 for the next two months – a well-deserved break, one would argue, after playing out a series of six scintillating matches over the last month or so.

With a pronounced gap between the just-concluded sets of home games and the away fixture which is slated for late April, it would be fair to say that the Indians have passed the initial and most vital phase of the competition with flying colours.

With 10 points from 6 matches - played against the top three teams in the world, Pro League debutants India find themselves in the fourth place in the points table behind Belgium, Netherlands, and Australia. 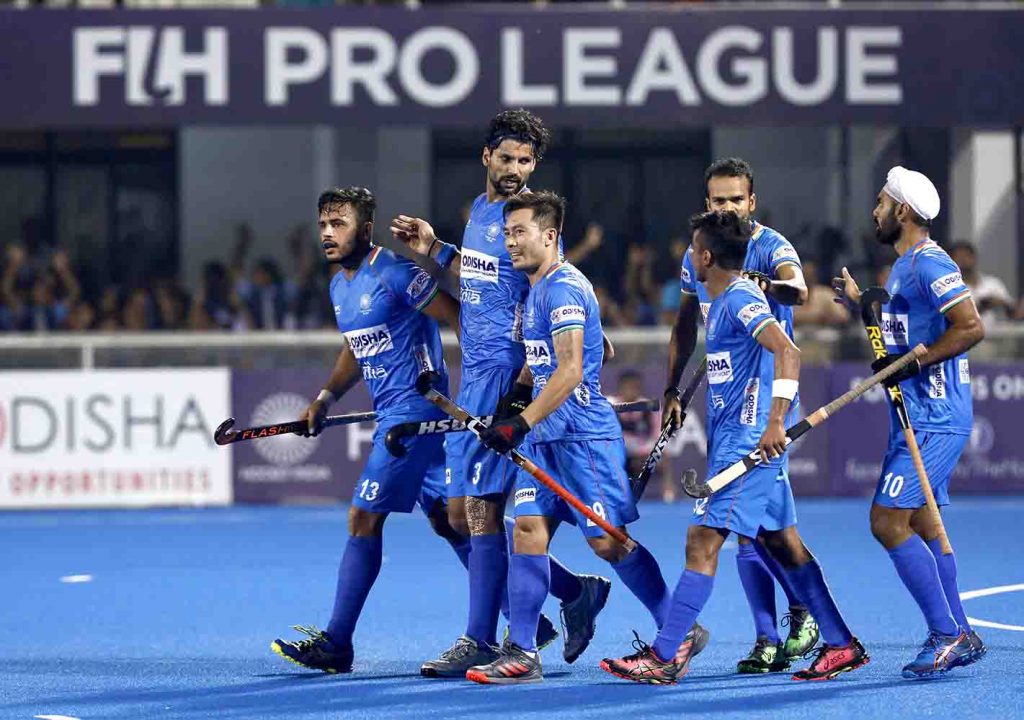 With 10 points from 6 matches - played against the top three teams in the world, Pro League debutants India find themselves in the fourth place in the points table (Image: HI)

The double-header between two of the oldest and the greatest hockey rivals on earth lived up to the expectations of all those who were fortunate enough to have witnessed the action at the Kalinga Stadium.

The Indians went down 3-4 in the first encounter after having trailed by a 1-4 margin until the end of the third quarter and held the mighty Aussies to a 2-2 draw in the second match before winning the shootout.

Winning the shootout would, no doubt, have been satisfying for a side who lost two vital tie-breakers against the Australians in the finals of the 2016 and 2018 Champions Trophy finals.

On Friday, the Indians took their time to settle in while the visitors seized the initiative early.

The Australians were undoubtedly the better side in the first half but failed to put away a few sitters allowing the home side a foot in the doorpost the lemon break which very nearly undid all the hard work that Aran Zalewski and co. had put in earlier.

Going into the final quarter with a three-goal cushion, the kookaburras failed to contain a determined Indian side who reduced the deficit and could very nearly have levelled the scores after having earned a PC at the death that missed the mark by a whisker. It would be fair to say that the Australians were not at their lethal best in the attacking circle thanks (Image: HI)

It would be fair to say that the Australians were not at their lethal best in the attacking circle thanks, in part, to some crucial interceptions and goalmouth tackles from India’s deep defence who made up for the yawning gaps which allowed the opposition easy access into the striking circle.

The home side very nearly conceded a disastrous early goal in the second match but Sreejesh proved for the umpteenth time that he can always be counted upon when things go wrong.

Krishan Pathak who replaced Sreejesh was not as flawless as his senior partner on the day allowing one to slip through his pads after the Aussies had been kept at bay until midway into the second quarter.

It was the Australians, incidentally, who were one of the first teams to replace goalkeepers each quarter, but just when the rest of the world are following suit, the kookaburras have now decided to give each of their keepers a full sixty minutes under the bar - as they did against the Indians at the Kalinga Stadium.

A couple of disallowed goals frustrated the Australians, on Saturday, as did the missed penalty stroke in regulation time but the home side do need to be commended for keeping the brakes on their more fancied opponents while troubling the opposition defence at regular intervals. Sreejesh proved for the umpteenth time that he can always be counted upon when things go wrong. (Image: HI)

Raj Kumar Pal who scored a brace in the first match continued to impress as did Rupinder Pal Singh with the drag flicks while Harmanpreet scored his first of the Pro League to give India at 2-1 lead and sound a warning bell to India’s rivals.

The fearless Indian runners did enough to ensure that the Aussie drag flickers failed to connect well enough to add venom to the PC strikes and the visitors ended up with no less than 10 wasted short corners on Saturday.

What was heartening from an Indian point of view was to witness the likes of Hardik Singh and Vivek Sagar Prasad bravely outmanoeuvre and outrun their senior Australian counterparts displaying a level of speed and skill that typifies the current Indian men’s hockey team.

Although the Indians have another home match against New Zealand scheduled for late May, their performance against the big three of the hockey world will not be forgotten in a hurry.

After a two-month break, the Indians play two vital away fixtures against Germany and Great Britain – but, for now, Reid’s boys can afford to give themselves a pat on the back after having nosed ahead of Argentina in the world rankings thereby giving their ardent fans a lot to smile about.