The lockdown period saw Indian Hockey Teams remain at the Sports Authority of India Campus in Bengaluru for close to three months, but without much contact with their sport as the teams followed the guidelines put out by the authorities. However, Indian Men's Hockey team's Midfielder Sumit is delighted to finally be practicing the sport again at his local ground in his hometown of Sonipat. The youngster says the time off from National Camp has been refreshing for him, and he is now again looking forward to rejoining his teammates soon.

"It has been a refreshing few weeks for me, getting to spend time with my family after such a long phase. When I arrived here, the happiness on my mother's face was priceless, and I felt so good just being back here. It has really lifted my spirits and I am very happy to have got this opportunity to enjoy some time off before a crucial year ahead for our team," said Sumit. "I have also been able to spend time with my brother and my nephew, it has given us the opportunity to catch up on a lot of things," he added.

Family time isn't the only thing that is keeping Sumit's excitement levels up, he says being able to pick up the hockey stick again has really pleased him. "As someone who has probably spent most days and sometimes even nights picking up the hockey stick, this long gap has obviously been very different. But here at home, I am really happy to have been able to resume some sort of outdoor stick-work on the ground as well with some of my friends who come to play. It is nice to be able to try out some skills and practice stopping and tackling while taking all necessary precautions even on the field. I have also been trying to keep myself in top shape ahead of our next National Camp, so I have been following my fitness training schedule through running and working out in my society," the 23-year-old stated. 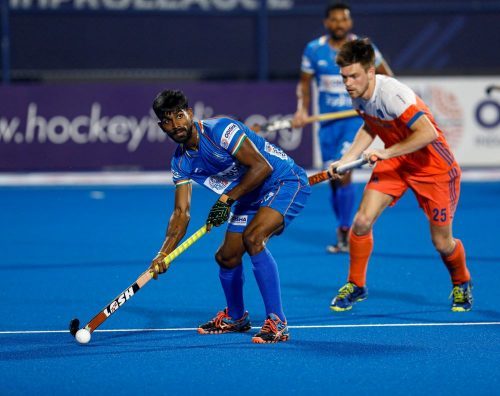 Sumit's impressive career with the Indian Men's Hockey Team has been backed by credible performances for the Junior team, which included winning the 2016 Junior World Cup in Lucknow, Uttar Pradesh. The defensive stability he brings to the team, and quick turnovers he manages, led him to making his Senior team debut in 2017 at the Sultan Azlan Shah Cup, and going on to consistently represent the country at major tournaments. "I consider myself really lucky that I get to represent my country at the highest level. I am a player who is really ambitious by nature, and having won the Junior World Cup in 2016, I want to always target winning the biggest tournaments with the Senior team. The upcoming couple of years are really important for us and I want to make sure I am in the peak of my career and can help the team," said the Midfielder.

The youngster is also keen to represent the World No. 4 Indian team soon as he has missed hockey for most part of last year with a fractured right wrist. "It was difficult for me to have missed those 4-5 months with the injury, but I had some conversations with Chief Coach Graham Reid, and he had showed a lot of faith in me. So it was great to have returned to competition against The Netherlands in the first two matches of the FIH Hockey Pro League. I was looking forward to returning to full rhythm ahead of the Olympics, but now I am just focusing on putting in the hard work to maintain my fitness, and aim to perform well for my team and the Chief Coach whenever hockey returns," said the 2016 Junior World Cup winner.