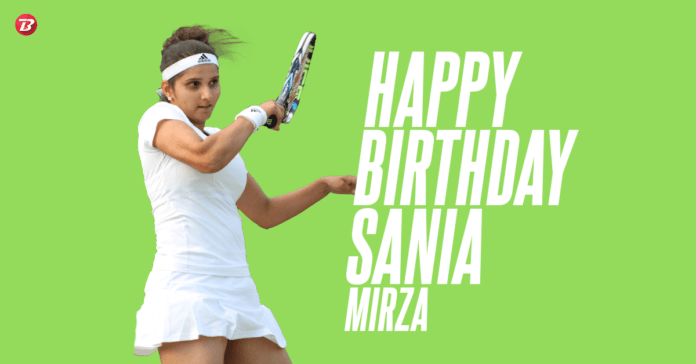 Sania Mirza is one of the most successful Indian women lawn tennis players. She marked her presence as the most iconic sportsperson in the country where cricket rule to the hearts of people. Following her stupendous performance in tennis, Mirza was conferred with the Arjuna Award (the second-highest sporting honour in India) by the Government of India in the year 2004.

In 2016, Mirza was named in The Times magazine’s list of 100 most influential people in the world. With a career-high ranking of 27 in singles and 1 in doubles, Sania is the highest-ranked female tennis player India has ever produced.

Sania Mirza is celebrating her 33rd birthday today and on this occasion, let’s have a look at her five best international wins.

Sania Mirza and her Swiss partner Martina Hingis claimed their maiden Wimbledon title in the year 2015. The duo of outclassed the Russian pair Ekaterina Makarova and Elena Vesnina by 5-7, 7-6, 7-5. With her win, Sania scripted history by becoming the first Indian women player to win a coveted Wimbledon title.

Top seeds Martina Hingis and Mirza defeated Casey Dellacqua and Yaroslava Shvedova by 6-3, 6-3 in the final. With their US Open win, the India Tennis star Sania Mirza and Swiss veteran Martina Hingis claimed their second consecutive Grand Slam title of the year.

Sania paired with India’s Mahesh Bhupathi and won the French Open, second Grand Slam Trophy for Sania in doubles discipline and the first French Open title. The Indian pair scored 7-6, 6-1 in the finals to win over Polish Mexican pair of Klaudia Jans and Santiago Gonzalez.

After finishing runners-up in the Australian Open 2009, Sania Mirza with her mixed double partner Mahesh Bhupathi came back stronger in the 2009 edition of Australian Open and clinched a title after defeating the French and Israeli pair of Nathalie Dechy and Andy Ram by 6-3, 6-1 in the finals.

Sania Mirza picked up her first title of 2017, combining with American Bethanie Mattek-Sands to lift the Brisbane International women’s doubles title, but ended up losing the World No 1 crown to her partner. The top-seeded Indo-American duo triumphed 6-2, 6-3 against the second-seeded Russian team of Ekaterina Makarova and Elena Vesnina in the final here. The trophy, however, ended Sania’s 91-week reign as the world No 1 doubles player in the WTA rankings. That position was taken over by Bethanie.

Sania Mirza has six Grand Slam titles in doubles and mixed doubles to her name. She plans to return to the tennis court after her maternity break, and will likely to begin her second inning in January 2020. With her return to the game after more than a year, the India tennis queen wishes to play in Olympics 2020 which is going to be held in Tokyo, Japan.

The Bridge wishes Sania Mirza a very Happy Birthday and a successful year ahead. Sarah Waris - January 16, 2020
Kheri Viran and Bahadurpur are all set to become the country's first 'Model Sports' villages as the Institute of Management Technology (IMT) Ghaziabad look to nurture a sports culture in India. Under the 'Adarsh Khel Gram' program, IMT...
Read more