On day 1 of Australian Open 2019, India was looking for a solid start by Indian tennis player Prajnesh Gunneswaran. But it did not go as per what Indian fans wanted, as Gunneswaran fought hard against USA Frances Tiafoe but crashes out in straight sets.

Gunneswaran looked impressive in his first set but as the game progressed his game tapered off. But there are certain areas which give the highlights were Gunneswaran has done well and in future can capitalise on 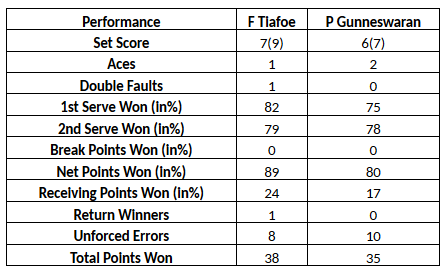 The first set was a very close competition between the two players. Gunneswaran was edged out in the tie-breaker. One best part of this set was that he was able to capitalise on his 1st serve and 2nd serve to maximise his scoring opportunities. The performance near the nets was also excellent as he won 80% of his points.

He didn’t concede any double fault and had two aces in the entire set which is a positive way to make opponent work for his point. The letdown areas in this whole set were the unforced errors that he has conceded. Out of 10, if he would have been able to convert 3 in his favour, then the set might have gone in his support. A 1st set victory would have provided a psychological victory over Tiafoe after such tight matches. 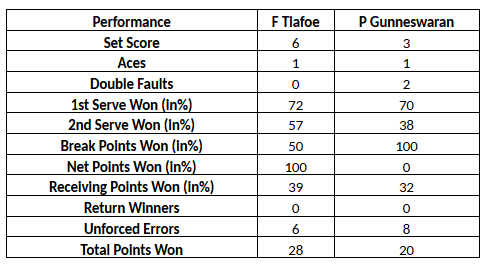 In the 2nd set, the scenario of the game was completely different even though Gunneswaran improvised in certain areas from the last set. He won all the breakpoints opportunities that he got. Even the unforced errors reduced to 8 since the previous set.

But this time, service points were not capitalized. He won 38% of his 2nd serve points whereas Tiafoe won 57%. There were two double faults by Gunneswaran as well. This created a big difference between the two players and costed the set 6-3 as a result. 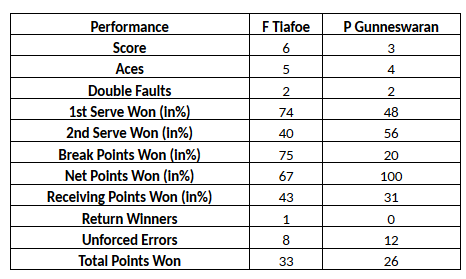 This set was a must-win set for Gunneswaran to stay in the contest. But Tiafoe has created pressure on Indian lad right from the start of the game to win it with ease. This time also Gunneswaran did extremely well to score on all his net points, and he produced four aces very impressively.

But Tiafoe’s strategy was to hold on to his service and break the service of the opponent. This happened successfully as in this set Gunneswaran ended up winning only 48% and 56% points of his 1st, and 2nd serve respectively.

In this set, 12 unforced errors which added to woes of his performance and lost the match in straight sets holistically as 6-7, 3-6, 3-6.

Prajnesh Gunneswaran is a great player in tennis singles as he got the gameplay to win big games. But in tournaments like Australian Open, he has to capitalize on his points like service points, unforced errors. This will automatically help him in future.