The Indian pair was always in the game and tried hard to earn points. But it was very unfortunate that they lost in the 1st round to the unseeded pair. There were certain opportunities which could have been grasped by the experienced duo and the match of gone in their favour. 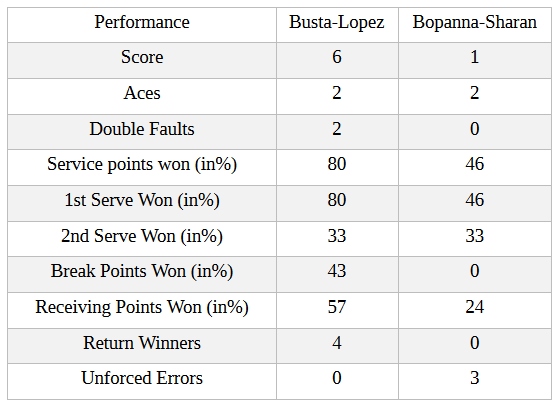 The first set was very bad for Bopanna-Sharan duo as they were not able to capitalize on their service points. The Spaniards were very clinical in getting their break points opportunities. On the other hand, the Indian pair won only 46% of their 1st service points whereas opposition won 80% of their chances.

Busta-Lopez were able to get 4 return winners and they forced the experienced pair to develop 3 unforced errors. These all errors succumbed Bopanna-Sharan team lose 1-6. In order to stay in the match, they had to rework on their strategies and correct the mistakes to comeback in the match. 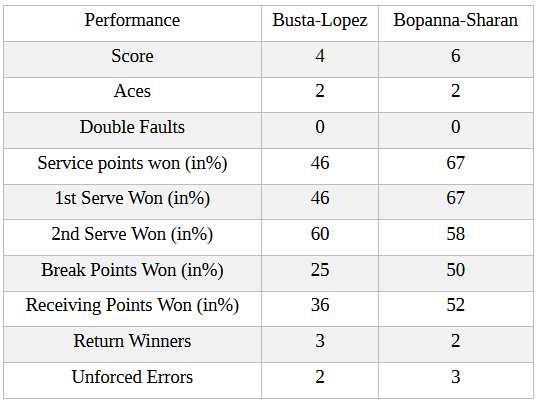 This time the experience of 15th seeded men’s double pair came back into action. They rectified their problems of previous set to win the 2nd set by 6-4.

The 1st serve win performance improved from 46% to 67%. They won double of the break points opportunities in this set compared to Busta-Lopez team. The best part of this set was they were able to capitalize on receiving points. This strong overall performance brought Bopanna-Sharan right back into the game. The final decider set was neck to neck but in the end, it was the Spaniards who had the last laugh. Bopanna-Sharan lost the final set 5-7 and made their first-round exit from Australian Open 2019.

Busta-Lopez regained their confidence based on how they performed in the 1st set of the match and in the close encounter they won. This time the game was lost because of one service break.

In 3rd set, the service points capitalization was less and they were not able to put the Spaniards in pressure situation. The receiving points by Busta-Lopez pair won was 26% whereas Indian pair won only 11%.

Indian pair failed to capitalize on their service points and this is the area where the difference was made between the two teams. More capitalization in service points will help them to go through and perform well in future tournaments.