Ankita Raina is one of the few players in tennis from whom India has a lot of expectations. Fed Cup qualifier is one of the big stages where India’s qualification dependent on India’s Ankita Raina and Karman Kaur Thandi.

Unfortunately, India finished at 4th place in the qualifier but Ankita Raina’s performance in singles was fascinating to watch.

Ankita played 3 singles games where she won 2 matches and lost 1 match. But in all the games she showed her tremendous potential to compete against big players in future days. 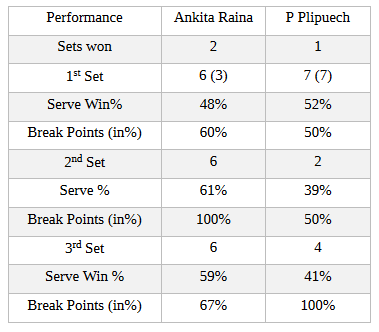 In the first encounter against Thailand’s Plipuech, Raina lost the 1st set in a tie-breaker by 7-3. But the positives to be taken from that set was her ability to break the service of her opponent.

She had 60% success in her first set but she could succeed only achieving 48% of retaining her set points. But this close-set loss helped her to strategize for the next two sets to win the match.

In the 2nd set, she lifted her game to a large extent. She won the set 6-2 with a clinical performance. This time she rectified her old mistakes which took her to tie-breaker.

She enjoyed 61% of winning her own service points and along with it, she gave no chance to her opponent and 3 out of 3 break points. This takes the match to the last and final set.

In the 3rd set, she continued her good form and strategy from the last game. She won the set 6-4 to clinch the victory. This time also she won 2 out of 3 break points. Another important feature of this set was only a 41% chance was provided to Plipuech in her service game. 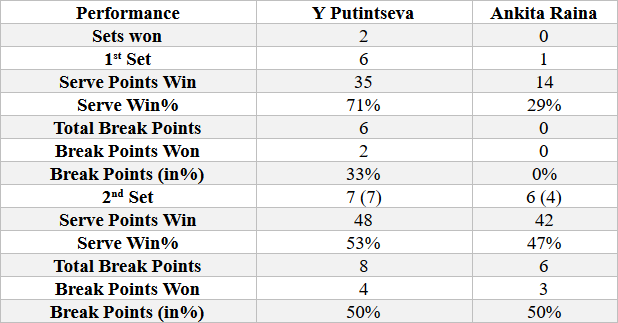 The match against Kazakhstan’s Yulia Putintseva was not fruitful in terms of results for Ankita Raina. She lost the match 6-1, 7(7)-6(4).

In the 1st set, Putintseva was completely dominant over Raina. She won 71% of her service points and got 6 break point opportunities. Ankita had no chance throughout the set to make a comeback and push her opponents to her limits.

In the 2nd set, Ankita made a strong comeback to take the game to 3rd set but unfortunately, it was not sufficient enough for her to win the game.

In this set, she got 6 break point opportunities out of which 3 went in her favour. There was a tremendous improvement in her service, she scored 47% points of her own service. In the previous set, it was only 14% which was one of the main reasons for her loss in set 1. 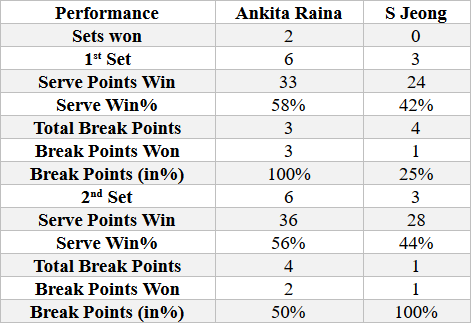 The match against South Korea’s Su-Nam Jeong was a clinical performance by Ankita Raina. Raina had her best singles outing in the entire tournament.

The key in this match was she did not drop a set. In the 1st set, she converted all her break point winning opportunities as well as had a 58% win on her own service. She won the set convincingly 6-3.

In the 2nd set, she showed her dominance against the South Korean to clinch it 6-3 and made it 2-0. This time also she focused on her service and made the opposition to create a chance for her to clinch the game.

With 56% service hold, Ankita was once again dominant to win the clash with ease.

The 26-year-old tennis lass from India has shown tremendous potential to outclass major opponents at big stages. She has to develop her winning momentum from the 1st set.

Secondly, she has to hold more of her service points in future. This will automatically enforce a creating opportunity in the opposition. We wish she can continue the same run and can achieve higher pedestal in tennis.
Ankita Raina Fed cup
Latest Videos
Next Story
Similar Posts
X
X