The youth team of Chelsea continued their enviable run of form with a convincing 5-0 win over their counterparts from FC Goa during the third day of the PL-ISL Next Generation Mumbai Cup 2020 here at the Reliance Corporate Park Football Ground, Navi Mumbai.

Goa started steadily and were disciplined in their defensive approach from the beginning. Despite the boys from Chelsea maintained possession of the ball for the majority of the match, the home team ensured that the Blues were not able to pierce the defence to bother Gaurs’ goalkeeper, Micky Dias. However, the boys from Chelsea continued to press the Goa midfield and through the flanks, in search of finding an inroad inside the box. Prajoy Gawde put in some timely challenges and he was well-supported by Reezvon Fernandes who managed to keep the Blues at bay during the initial part of the game.

However, Chelsea broke the deadlock in the 24th minute before a goalfest in the following six minutes. Kamarni Ryan broke free from the shadows of his marker and comfortably slotted the ball into the net. Just a minutes later, Ato Ampah, who had a brilliant outing against Southampton yesterday set up a perfect assist for Jack Phillips’s goal just before the half time whistle.

Phillips bagged his brace through some deft touch in the 29th minute finding the corner of the net. Kamarni grabbed his opportunity of doubling his tally when he took on Goa’s defenders and manoeuvred the ball into the back of the net through a neat strike from near the box. FC Goa’s Bryson Pereira nearly reduced the deficit for Goa but his header found the back off the crossbar in the 40th minute.

Finally, Ato Ampah put his name on the scoresheet as he stepped up to take a spot-kick in the injury time and to the top-right corner to conclude a five star performance for his team.

The Reliance Foundation Young Champs managed to find the net in the dying minutes of their thrilling encounter against Bengaluru FC to register a 2-0 victory in an evening fixture on Day 3 of the PL-ISL Next Generation Mumbai Cup 2020 at the Reliance Corporate Park in Navi Mumbai.

As has been their style of play during the past couple of days, the Reliance Foundation Young Champs started off aggressively and looked to impose their attack on the Bengaluru boys. The hosts stitched passes together across the midfield and created a constant threat on the flanks.

RFYC lad Chirag Bhujel, in particular, was impressive as he kept troubling the opponents’ back. The winger created a major opportunity as he raced through the right wing on one occasion and unleashed a strong left-footed shot but could not find the back of the net.

However, Bengaluru FC held on in the first half through their strong defence led by Rajanbir Singh. The solidity at the back allowed the Bengaluru outfit to counter attack and with one offensive move testing RFYC goalkeeper Aniket Ghosh in the 22nd minute.

RFYC continued to ascend in the second half as well and searching for the opening goal of the match. They came close to breaking the deadlock in the 39th minute when Harsh Vaghela saw his shot go wide of the far post from inside the box. Three minutes later, the striker had another chance but his header flew agonizingly above the bar.

RFYC finally found the back of the net in the 49th minute when Aarush Kamath towered above the opposing defenders and deposit the ball in.

Harsh then added to the hosts’ tally in the fourth minute of stoppage time to help the Reliance Foundation Young Champs notch their second victory of the tournament. 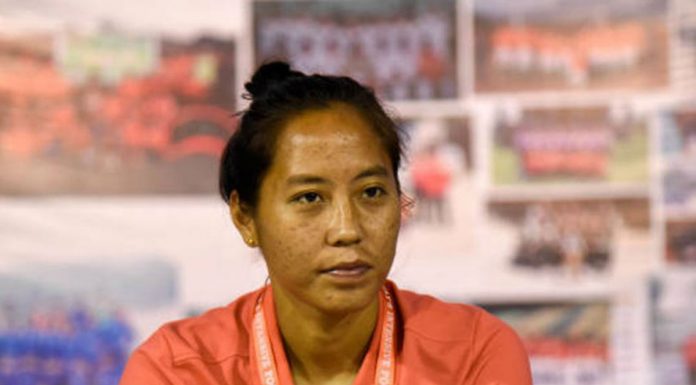 Press Trust of India - Modified date: March 31, 2020
Devi is among the latest leading players of the continent to join the Asian Football Confederation's #BreakTheChain video campaign, aimed at raising awareness in the fight against the spread of coeonavirus.
Read more