ISL 2019: Disciplined and defensive ATK go top with a win over Mumbai City Mumbai City had chances from a number of crosses from both the sides into the danger area and shots from distance which kept the ATK defence and Arindam Bhattacharya busy for most of the time in the second half. However, the lack of the final killer instinct in the box and incisiveness in the finishing cost the Manchester City-owned franchise their chances to go into the lead. ATK capitalised on their individual brilliance and counter-charges, which led to a comfortable 2-0 win over the hosts.

The game started on a positive note for the hosts. The first real chance of the game came in the 12th minute when Mumbai City pulled off a brilliant team move. Raynier Fernandes showed some skills and tricks to evade a couple of challenges, found Diego Carlos on the run on the left side. Carlos played Chermiti on the run with a wide ball who set up Modou Sougou on a platter whose shot went straight to Arindam Bhattacharya.  ATK hit back a couple of minutes later when a free-kick from Javier Hernandez was tipped off the crossbar by Amrinder Singh with an acrobatic attempt.

ATK kept on absorbing the constant Mumbai City pressure and had a few openings against the run of play. One of the openings finally rewarded ATK with the opening goal. Roy Krishna played David Williams on the run on the left side. Williams waited for his fellow teammates to rush and provide him with some options to pass to. Williams found Pronay Haldar on the opposite side who finished off the chance right in the bottom right corner in the 30th minute.

ATK had a chance right after the goal with Michael Soosairaj who had an instant impact. Soosairaj was played on by a header from Roy Krishna. Soosairaj with his calm composure placed it beyond the reach of Amrinder Singh in the top right corner with a sublime in-swinging attempt to make it 2-0 in the 44th minute. ATK went into the break with a well deserved 0-2 lead.

The second-half a very similar start. Mumbai City kept pushing for the goal but a disciplined ATK side were on the task and prevented the Islanders from scoring at all costs. Mumbai City kept agonisingly close to scoring in the 69th and 71st minute.  A ball from Sougou found Larbi whose shot bobbled around in the ATK box waiting to be finished but the ATK defenders got it clear. The home side had a shot from Chermiti cleared off the goal-line by Sumit Rathi who was adjudged the Man of the Match for his brave and disciplined performance.

Modou Sougou found the back of the net twice but both were disallowed. He was caught offside on one occasion while the other goal was disallowed citing a foul by the Sengalese on Arindam Bhattacharya in the 74th and 82nd minute respectively. Both the decisions by the referee were a very contentious affair and is sure to be talked about. The home side kept pushing and almost scored yet again but not Serge Kevyn whose header from a point-blank range went wide just before the 90th minute. The ATK defence defended well and had quite a bit of luck and ran out comfortable 2-0 wins. 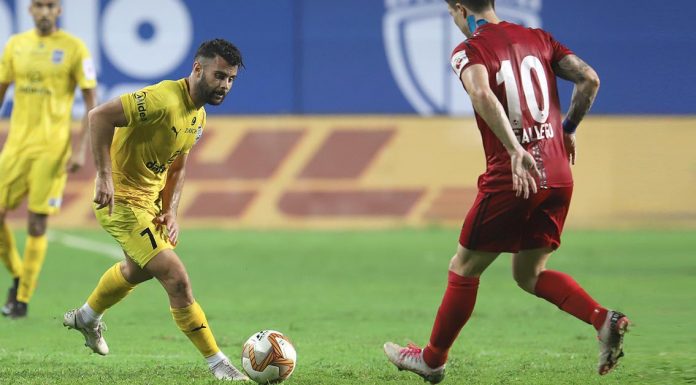