The 32 – year-old was born in Ouagadougou, Burkina Faso, a West African Country

Kerala Blasters FC (KBFC) is proud to announce the signing of Bakary Koné, adding strength and depth to the defensive department. The 32 – year-old was born in Ouagadougou, Burkina Faso, a West African Country that shares its borders with the African footballing giants Ghana and Ivory Coast. Koné started his professional career when he joined his hometown club Etoile Filante’s Youth team in 2004 from CFTPK Abidjan. Post an impressive season with the Youth team, the young defender was promoted to the senior team for the 2005-06 season where he made 27 appearances and scored his first professional goal. Having caught the eye of French scouts, Koné was rewarded with a move to France as he joined Guingamp in Ligue 2. He spent his first two seasons with the reserve team as he developed his game and was quickly promoted to the first team in 2008. He spent an additional three years at the club, winning the Coupe de France in 2009.

In 2011, he joined the French giants, Olympique Lyon. Moving to the top division of French football meant that he came up against some of the feared strikers in the world, Zlatan Ibrahimovic and Edinson Cavani. During his five years at the club from 2011-16, the Les Gones were Champions of the Coupe De France in 2011-12 and winners of the Trophee Des Champions in 2012. The club was also runners-up of Ligue 1 in the 2014-15 and 2015-16 season. The resilient defender made 141 appearances for Olympique Lyon in all competitions including the UEFA Champions League and the UEFA Europa League.

“I am really excited about signing for Kerala Blasters and coming to India for the first time. I have heard a lot about the Indian Super league from (Nicolas) Anelka and he had very positive things to say. I know KBFC has one of the biggest fanbases in the ISL and I am motivated to give my 100% to the club each time I take the field. Can’t wait to join my teammates and the coaching staff in Goa and get started”, said Bakary Koné who will be joining the KBFC squad soon in Goa for pre-season training.

From Lyon he moved to Malaga where he had a brief stint in the La Liga before moving back to Ligue 1 with Strasbourg on loan where he came up against the mighty PSG with the front three of Di Maria, Neymar and Kylian Mbappe. The last two seasons Koné moved to Turkey and Russia before his move to India to join Kerala Blasters FC. Koné made his debut for the Burkina Faso National Team at the age of 19. In 2014, the Burkinabe International, captained his national side for the first time in an Africans Nation Cup Qualification match against Angola. With 81 appearances, Koné is currently the third most capped player for his country.

“Koné is a player with notable experience and skill, having played for renowned clubs in top European Leagues. His presence will surely improve the defensive setup of our squad this season. Koné is motivated to get in shape quickly and give his best to help us fight for top positions in the League. I have no doubts about his ability and the quality he adds to the squad”, said Karolis Skinkys, Sporting Director, Kerala Blasters FC. 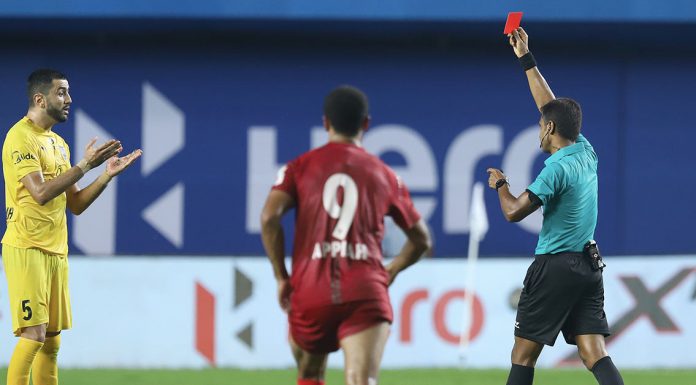