Manipur Police made their way to the 2018-19 Hero Indian Women’s League Final after a thrilling performance that saw them beat Gokulam Kerala FC 4-2 despite being one player down for almost the entirety of the second half at the Guru Nanak Stadium, here on Monday.

Bala Devi was the star of the show yet again, as she netted all four of the Manipur goals to help them come back from being 1-2 down after the North-eastern side’s defender Romi Devi was sent off on the 47th minute.

Manipur Police went on the offensive early on and started creating a lot of chances. Unlike their previous game, they started with a 4-4-2 formation with Bala Devi and Daya Devi operating up front. Bala dropped deep to add more numbers to the Manipur midfield and feed the balls to Daya.

It was one of these moves that got Manipur their goal on the quarter-hour mark. Daya was played into the box via an aerial through ball, but was fouled by Gokulam centreback Poli Koley. The referee immediately pointed to the spot, and Bala Devi converted the penalty to put the side from the North-east in front.

Gokulam were having some trouble to get their attacks going, as Manipur made a concerted effort to crowd out Manisha, who was playing in the attacking midfield role. Soon, they made a couple of tactical changes that turned things in their favour.

Poli Koley was brought off, as the Kerala side pushed Lako Bhutia to the centreback position, while Naocha Devi came on to take up the holding midfield spot alongside captain Dalima Chhibber. Soon after, Gokulam gaffer pushed Manisha up front, while Anju Tamang played in the hole behind her.

This new approach started working for Gokulam, as they started to play their counter-attacks off Manisha. They finally got their equaliser through a corner, as Bina Devi turned it into her own net from a melee.

Gokulam came out with the early initiative in the second half, and Anju Tamang penetrated the Manipur box and fired a shot that was blocked off the line. However, it had struck Romi Devi’s hand and she was subsequently sent off. Ranjana Chanu converted the ensuing penalty to put Gokulam in front for the first time.

Manipur, however, did not lie low, despite being one player down. They pressed forward, and earned another foul inside the opposition box, which gave them a penalty to equalise from. Bala Devi duly converted it to put her side level.

The Daya-Bala combination finally worked out, as the former soared in from the left and sent in a low cross for Bala to convert from close range with a little over 10 minutes of regulation time left on the clock. A minute later, it was a bit of individual brilliance that did the magic for Manipur, as Bala turned fullback Linthoi inside-out, and fired a left-footer into the bottom corner.

With this performance, Bala now moves on to 26 goals six matches in the 2018-19 Hero Indian Women’s League, as Manipur Police progress to the final. 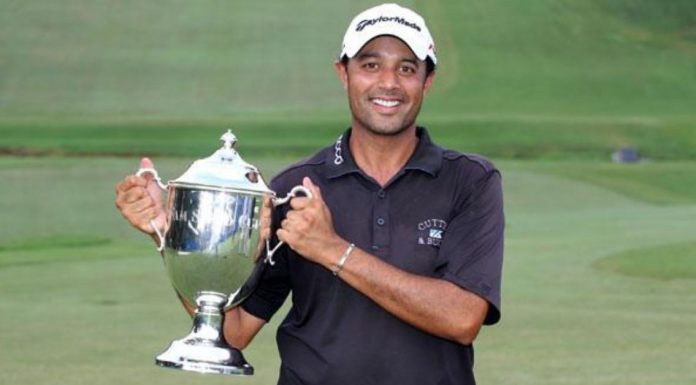 Press Trust of India - Modified date: August 11, 2020
Ten years is a long time but to Indian golfer Arjun Atwal, the memory of his historic win at the Wyndham Championships is still fresh and he would be aiming to draw confidence from it when he tees up at the event this week....
Read more