Over the past few years, football in India has managed to establish a strong foothold due to the increasing visibility of the Indian Super League (ISL). However, one area where we still lag behind is women’s football. While the focus on the men’s game has seen a seismic shift since the initiation of the ISL, the women’s game is still struggling to garner similar traction.

The start of the Indian Women’s League (IWL) in 2016 was hailed as a step in the right direction. But the lack of infrastructure, general awareness and low marketability of women’s football has been a big hurdle. Amidst all of this, one state has stepped up to the plate in trying to develop an inclusive footballing culture. As a result, it is now reaping the rewards of promoting football as the pathway towards a better future for young girls residing there. That state is in fact Jharkhand. 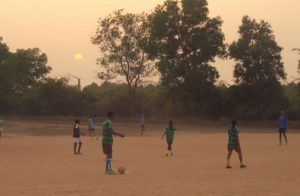 Girls playing football in the rural areas of the state (Source: File Photo)

The first signs of the untapped potential amongst girls in the state appeared in 2013 when a team from Jharkhand’s hinterland, scouted and trained by a non-governmental organisation named YUWA, performed exceedingly well in two Spanish tournaments. This was followed by an appearance in the Schwan’s USA Cup, which is the biggest international youth soccer tournament in the United States, the following year. That was the beginning of an entire generation of young girls taking to the game in an effort to make a name for themselves and their families.

2019 went on to become a landmark year for the Jharkhand Football Association (JFA) with their girls’ teams winning the gold and silver medals respectively in the Sub-Junior and Junior Girls National Football Championships. At the time, this resulted in the national selectors picking as many as eight girls for the national camp for the U17 Women’s World Cup which was initially scheduled to take place in India last year. Unfortunately, the tournament had to be cancelled because of the pandemic with the next installment scheduled for next year with India once again getting the hosting rights. One of those eight, midfielder Sumati Kumari, is a part of the Indian women’s national team that is currently on an exposure trip to Turkey. 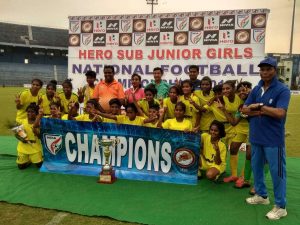 The Jharkhand Sub-Junior girls team back in 2019 (Source: Goal.com)

A lot of credit for all of this goes to the JFA’s approach towards spreading the sport in every part of the state for the last five-six years. Under the guidance of secretary Ghulam Rabbani, the federation has set up a thorough scouting network helmed by Suryaman Pradhan and Asish Bose whereby the duo visit the remotest centres in search of budding talents. In the process, tribal areas like Gulma, Ramgarh and Koderma have also been brought into the fold apart from the urban centres like Ranchi, Jamshedpur and Bokaro.

While most of the girls from these areas hail from financially weak, tribal families, their urge to learn and improve themselves is something that sets them apart. Once identified, the girls are trained by local coaches and the cream of the crop are then sent to the Sports Authority of India’s (SAI) Ranchi complex. However, arranging regular camps for these players is an issue that needs to be addressed. In the absence of that, a lot of them have to go back to their villages, away from the sport, and end up losing their competitive edge.

Thinking about the many types of barriers that these girls have to go through should provide some perspective for those of us from privileged backgrounds. Snide remarks from people around them, lack of basic infrastructure and familial pressure are just a few of the mountains that they have to climb in order to reach a certain level. Added to that is the lack of sponsors for local leagues, something that could have otherwise hastened their development. Despite all of this, the All India Football Federation’s (AIFF) decision to award Jharkhand the ‘Special State’ status is the kind of push that women’s football in the state currently needs. All we can do is hope that the girls can keep their head up and keep showing their quality on the pitch en route their ultimate dream, representing India on the international stage.

(with inputs from an article on Goal)