Some people are born great, others have greatness thrust upon them, they say. Infantile took away 18-month-old Madhu Bagri’s ability to walk. Today, she is the first woman from the country to have achieved an International Tennis Federation (ITF) Wheelchair Tennis World Ranking.

Like most kids in the neighbourhood, little Madhu had always evinced a great deal of interest in sports. The only difference was that she suffered from polio and was only confined to a wheelchair. Over time, her friends became stronger and faster, while her own physical movements were increasingly restricted. Having been bedridden for a tiring span of three years after spinal surgery, Madhu could see her world crashing down around her. To her, the condition was no less than a puzzle that could never be again put back together. But who knew that her indomitable grit will be taking her places? She sidled up to greatness in her own sweet time, letting it wash over her, while she ensured that she did not lose faith. It suffices to say that only a few could have predicted just how integral she would become to the narrative of tennis competitions for the disabled.

She had to stop going to school after her spinal surgery in 2011, much against her desire. A lone fighter in her battle against challenges, Madhu pursued her studies through distance education and eventually graduated in Commerce. “That phase of my life was akin to waging a world war. Wherein I was at one end and everyone else at the other and the fight was bitter and brutal. Everyone including my family asked me to quit my studies and just accept life as it was. But I never gave up and I fought against all odds to complete my studies and I did so with flying colours,” Madhu says, baring her mind. Her earliest memories of picking up the racket go back to ten years or more when she would spend countless hours in her backyard, in a wheelchair, and struggling to reach the shuttlecock every time.

Soon in 2012, the athlete inside Madhu surfaced, looking for a sport she could compete and thrive in. She realised there was a sport meant for the disabled after joining a badminton academy. This was perhaps the turning point for Madhu, a significant period from which she milked self-confidence and intrinsic knowledge of her own abilities and qualities.

Playing badminton gradually led her to play tennis until 2016. Despite odds from a few that an athletic career would be difficult if not impossible to achieve, Madhu proved to others and to herself that the only limits she faced were those she put upon herself. She competed in multiple international tournaments and soon became the national champion. 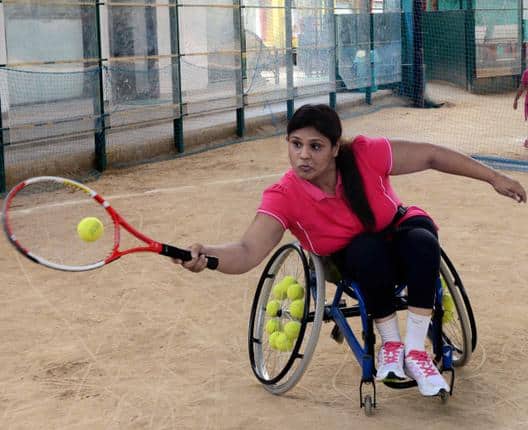 However, the journey hasn’t always been smooth for the Ahmedabad native. Madhu had a slew of difficult decisions to make when she initially started out but isn’t that what makes her pursuit all the more worthwhile? Definitely, yes. She was selected in the Asian Games tournament in the year 2014 while struggling with economic strain at the same time.

Another misfortune befell her only two years later. She sustained a severe injury in her shoulder, threatening her aspirations of becoming a successful tennis player. But even those darkest days failed to unsettle her. Instead, Madhu switched her focus to para-cycling. After a rigorous training for eight long months, she was selected for the 2018 Asian Para-Cycling Championship event in Myanmar.

Madhu's journey started off as a puzzle with all its pieces jumbled and disarrayed. But she was destined to be much more than an inspirational story. One by one, Madhu put the pieces together to reveal a masterpiece. Her story, and her fight, goes on.

Remember, you must not lose hope but keep faith in yourself!