What to expect from India's Davis Cup clash against Serbia

It is The War of The Nations, Davis Cup and  India is all set to meet Serbia in the World Group Play-off tie that is scheduled to be held from the 14th September to 16th September in Kraljevo Serbia. This is the fifth time overall that India clashes with the host country but second in the Play-off stage.

Last time the two nations met  in 2014 in the World Group play-off tie which was held in Bangalore where despite having a home advantage, we lost 2-3 to the visitors. India had played in the Elite World Group Round 1 held in Novi Sad against Serbia in 2011 where they lost 1-4 to the hosts and since then jostling to get a berth in the elite 16-Nation World Group again.

The last four times India was inflicted with losses in the World Group Play-offs were 2014 Serbia, 2015 Czech Republic 2016 Spain and 2017 Canada.

In what will be a fifth attempt, India will try and give their best to once again secure a place in the World Group since 2011. This play-off tie will be held in an indoor clay-court at the Krajlevo Sports Centre in Serbia. The last tie that India played  on clay was the Asia/Oceania Group I 2nd round tie against Uzbekistan in April 2012 which they had lost.

In the month of April, India had registered a dramatic 3-2 win over China in the Group I semi final to reach the World Group play-offs. Worth reminiscing Leander Paes and his landmark 43rd Davis Cup win when he breezed  past the Italian Great Nicola Pietrangeli in the most number of Davis Cup victories. Also Prajnesh Gunneswaran’s last minute heroics to win the decisive fifth rubber against Wu Yibing gave India that winning edge in the most dramatic fashion ever.

This time though, doubles specialists Leander Paes and Asian games Gold Medallist Divij Sharan will not feature in the team that has already set away for Serbia. Sharan who is nursing an injured shoulder will be a conspicuous loss given his great partnership with Bopanna in Palembang.

It does bring a deluge of disappointment for Indian fans as also the country’s leading singles player World No 96 Yuki Bhambri has withdrawn due to a knee injury that flared up during the US Open in New York.

But  a relatively depleted field of Serbia with their ace singles star World No 33 Filip Krajinovic pulling out due to a shoulder injury and reigning Wimbledon and newly crowned US Open champ Novak Djokovic opting out as well, India does have that extra edge to thwart the hosts. Serbia, who have been a part of the World Group for 11 years, surely will not be easy as opponents especially with having a home advantage to play on. But that does not entirely rule out the chances for India.

We preview the Indian team who will compete in this Davis Cup tie and analyse our chances. In his third year at the Davis Cup, World No 135, India’s second best singles player Ramkumar Ramanathan will play the singles rubbers in Serbia. Ramanathan who made headlines in the past few months by reaching the Finals of the Hall Of Fame tennis championships in Newport can be a good bet if he sets his focus and is able to keep that mental composure.

Showing a marked improvement in his serve and net play, Ramanathan  can most certainly try and win his singles matches. Albeit, in the recently concluded Asian Games, Ram put up an extremely disappointing performance. But, again, if he is able to put the ghosts of that loss behind, Ramkumar can make up for it in Serbia.

Since this tie is to be held on clay, it is important to quote that the Chennai star has not been as good on clay this season on the Tour. He has won only 5 matches out of the 12 on the red dirt.  The most recent match he lost on clay was the round 1 match of the Sevilla Challenger.

Looking at his past performance in the tie against China in April, he had lost his first round match to Wu Yibing but came back to defeat Wu Di in the next rubber. 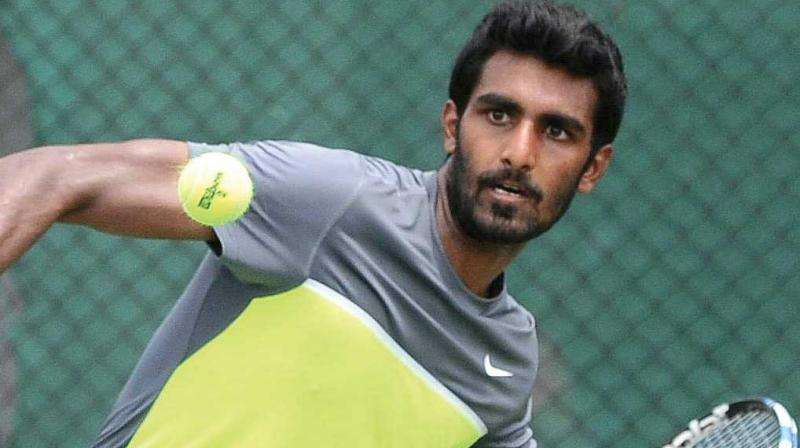 Asian games Bronze medallist Prajnesh Gunneswaran, is making his second appearance at the Davis Cup after 2017. In the Semifinal of the Group I tie against Uzbekistan in 2017, Gunneswaran had won the Rubber 2 with a gritty win over Fayziev Sanjar but lost the fifth rubber.

This year in April, also the Group I Semifinal tie against China, Prajnesh who was fielded as a last minute contender in place of Sumit Nagal registered a brilliant win over China’s rising star Wu Yibing in the decisive rubber to gift India a 3-2 win.

Meanwhile Gunneswaran is 9-5 on clay this season. After a quarter-final finish at the Nanchang Challenger and then going to win the Challenger Anning on clay, Prajnesh is more adapt to the red surface than anyone else in the team. The confidence that he exudes on the surface led him to win his first ever singles title on the Challenger circuit and he now has a better understanding of his game.

After Divij Sharan pulled out, the AITA selection committee named World No 110 N Sriram Balaji and Arjun Kadhe as replacements for the six- member team that was originally announced.

Sriram Balaji will team up with World No 30 doubles specialist Rohan Bopanna in the doubles rubbers. Kadhe and Saketh Myneni will be reserves for the team. 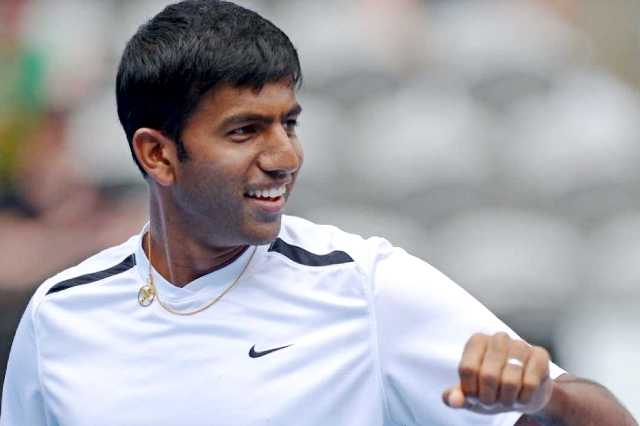 Asian Games  Gold medallist, World No 30, Rohan Bopanna is in his 15th year of the Davis Cup. Having played his first ever part in the event back in 2002, Bopanna is the most seasoned camper in the Indian Davis Cup team. He has played 26 ties till date and has a 19-24 win-loss record. In April this year, in the Group I semifinal tie against China, Bopanna paired with the Great Leander and won their third rubber against Mao Xin/ Zhang Ze in three sets.

The 2017 Mixed Doubles French Open champion, Bopanna has been consistent on clay this season. Making the Semi finals in Monte carlo and then the quarter finals in Barcelona and French Open, the Indian doubles specialist has been a reliable source of drawing accolades for the country. With his consistent performance on clay, India can have that edge over Serbia when the two teams shall fight it out on the red surface. 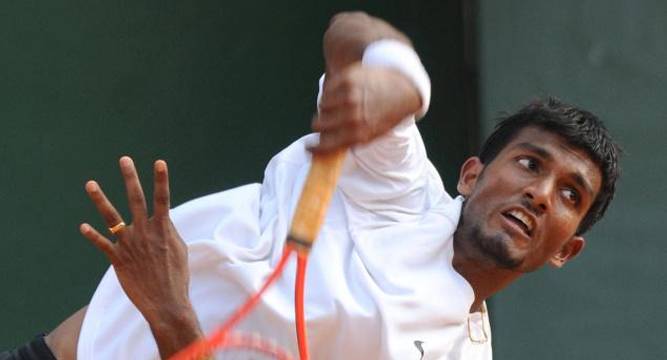 28-year-old Sriram Balaji  will be playing his second tie after making a winning debut against Uzbekistan in 2017 when he won their doubles rubber with Bopanna by defeating Farrukhh Dustov and Sanjar Fayziev.

As for the Team Serbia, their ace singles player Filip Krajinovic has withdrawn due to a shoulder injury. World No 33 Krajinovic was their huge hope in singles after Djokovic too made himself unavailable for the tie. Krajinovic was unbeaten last time when the two teams had played at the same stage of the tournament four years ago.

“I had to cancel my participation in the Davis Cup,” the 26-year-old told Serbian newspaper Sportski Zurnal. “I’m really sorry, but my shoulder is not in the brightest condition. It hurts. I cannot serve until the end of next week, so it automatically meant that I could not play (the tie) in Kraljevo.”

In the 2014 tie, Krajinovic had beaten Somdev Devvarman in the second rubber and then took out Yuki Bhambri in the decisive fifth rubber to help Serbia win the tie 3-2.

World No 56 Dusan Lajovic and World No 86 Laslo Djere will play the singles rubbers.

Lajovic is also a seasoned Davis Cupper of Serbia. Also supremely adept to clay, Lajovic can be a huge threat to our singles contenders who do not favour the surface. Into his 7th year of the tournament, Lajovic has played a total of 10 ties and won 8 out of the 15 matches. He beat John Isner in a very scintillating  Rubber 2 of the World group first round tie against the Americans which they eventually lost 1-3. Having made the quarter-finals in Madrid, Umag and Kitzbuhel, Lajovic also has a semi final to his name in Lyon where he went down to Dominic Thiem. All these came on clay for the Serbian and it just explains the dangerous trooper he can be in the upcoming play-offs for India.

Laslo Djere on the other hand is playing just for the second year in the Davis Cup.

In their doubles, youngsters Pedja Krstin and Nikola Milojevic will play the doubles rubbers. Both of them are playing their first year in the Davis Cup.

My take on our chances

Even though our Indian team at the Davis Cup appears rickety with Bhambri and Leander’s absence, we still can take heart from the fact that Serbia too is not having as much as a robust team with Krajinovic’s pull out. Of course Lajovic can hurt but we still have a strong pairing of Bopanna and Balaji while their doubles could not be so fiesty. With Prajnesh doing fairly well on clay, we can sit back and hope that we punch a ticket into the World Group on this fifth attempt.