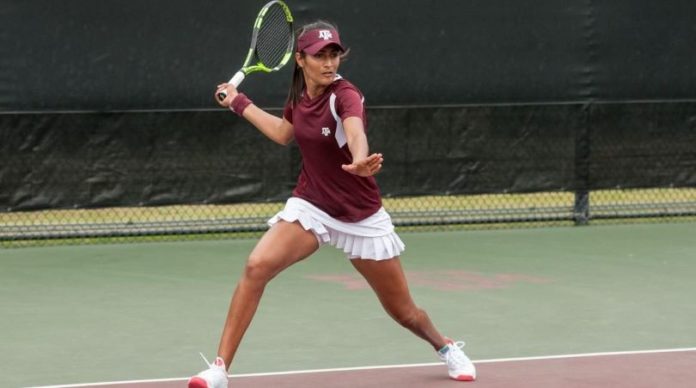 Rutuja Bhosale is one of the brightest talents we have on the Indian Women’s Tennis circuit. Right from the prestigious Shiv Chhatrapati Award to representing India at the Asian Games, Fed Cup to the recent top-200 doubles ranking – Rutuja has many accomplishments in her kitty already.

Returning from an injury break and with her new association with the Pro-Tennis Coaching team in Barcelona – she provides with the detail on her injury, the impact of her coach Marc Conovas, the focus areas in her game and the phenomenal doubles success so far.

You had been away from the tour for about three months due to an injury at the beginning of the year. Can you shed more light on the injury and how the recovery has been?

I had a labrum slap tear on the right shoulder and it was there for a couple of years. The pain was on and off. In December, I had played a lot of matches, and the pain had aggravated – I could not even lift my arm in one of the matches at the ITF $25K in Solapur. I had done pretty well in that event, but in the semis, I made it worse.

I was supposed to play another tourney but then when we got the MRI done – it looked pretty inflamed. I had just started working with the new coach Marc Canovas from Pro-Tennis Coaching Barcelona. He suggested that I take six weeks off for rest and rehab work to ensure the shoulder is healed.

Unfortunately the India ?? Tour finished due a shoulder injury! Anyways very good performance @rutujabhosale reaching the semifinals and beating the first Top-100 WTA in your career. It was great to help you this two weeks, and welcome to @protenniscoachingbcn family. See you in a few days in Barcelona!! For me, time to come back home ???✈️?#protenniscoaching #protenniscoachingbcn #traintosucceed #coach #protennis #wta #atp #castelldefels #barcelona #thebestisyettocome #india??

My parents were very supportive as well during this phase as I had been enduring this on/off for the past two years now. Marc and the coaching team as well have been very watchful on the number of tourneys and play time I have so that I have a smooth transition back on tour. You have been associated with Pro-Tennis Coaching Barcelona for about 5-6 months – How has been your experience so far?

In January and February, I was in Barcelona, where we had a team which worked on me that provided all-around support. My team knew what was needed for me, and so I just needed to follow-on on the plan outlined. Everything is under one roof, so I do not need to go anywhere else.

It’s been good so far, and I hope the momentum continues from here.

On winning the Shiv Chhatrapati Award – Must have been a proud moment for you and your parents?

It was a proud moment, indeed, especially for my parents. My father is from the Police force in Maharashtra, and it is the most prestigious award in Maharashtra – so it was a dream come true.

Extremely honoured on receiving the prestigious Shiv Chhatrapati Award!
What’s better than your proud father receiving it on your behalf…Thankful to everyone who had made this possible!???
#Relianceyouthfoundation#ONGC#YonexIndia#MSLTA# pic.twitter.com/ROA0NlFb6m

Your thoughts on the progress this year so far – in doubles – you had a win, a final and a semis.

I enjoy playing doubles even though I do not specifically focus on it much. However, the results of my doubles have been much better than my singles.

First ?of the year with my team @protenniscoachingbcn @marckus_78 @dani.ortigosa Thank you to my partner for an awesome week?? #Upwardsandonwards#headup#Reliancesportsyouthfoundation#NECC#yonex!

My focus is singles, and I have been putting a lot of work into it. However, the results started showing up first in the doubles, and hopefully, the results of the singles will follow soon.

You had a stellar US College record especially in Doubles (No.4 ranking). You are already close to the top-200 in WTA Doubles. How tough is it to manage the aspirations of both careers (Singles and Doubles)?

In any tournament that I enter into, I would prefer to play both the singles and the doubles events. However, there are factors like surface, my body condition and so on, which influence my game.

I had a three-month injury break and this is the first time where I will play for three weeks continuously in both singles and doubles and so I have to monitor how my shoulder handles the load. If the load is too much, I would probably miss doubles for that week.

Congrats to @RachelPierson6 & Rutuja Bhosale, who are ranked a Texas A&M all-time high No. 4 in this week's @ITA_Tennis doubles rankings. pic.twitter.com/5sXyYMEgs0

However, I would definitely love playing both formats.

Your first top-100 win against Tamara in Solapur. You had an injury soon after but that win must have given you immense confidence vis-a-vis your singles career?

That was the second tourney where I started working with Marc, and so I wanted to do well so that he can start working with me. The first match I played in the tournament, I was so nervous. I didn’t really play well, the match was going to the wire and my opponent (Lee Ya-Hsuan) retired. I played well in the second round too.

Against Tamara, my coach gave me the confidence that I can do it and to ensure I fight it out for every point. I think the level in the top-100 is if you can do the same thing over and over and over again – then you get the result. In that particular match, I did it.

That is what I should be doing more often to get those results.

Any specific areas of your game that you are working on to improve your game further?

My body is a little bit lean. So Marc and team are working to make me stronger to sustain and play at the same level. This is the main focus for us right now.

In doubles, you seem to gel seamlessly with different partners in each tourney in doubles. How tough or easy it is to transition from one partner to the other with every tourney?

Right now, it is challenging to stick to one partner because everyone wants to play with the best partner to win the tourney.

When I see the entry list, I ask the people whom I will be comfortable or gel with. I mostly choose someone I know. If that player is already taken, then I go with my instinct on the best player to reach out to.

It has helped me. Before the College tennis stint, I was a very shy person and not outgoing. After I went there, it changed my perspective on life, my independence and it just built me up as a tennis player and as a human being.

Tennis-wise – if you are in a top-20 team, you get to face lot of high quality competition. Its competitive and the girls won’t give you free points. It builds up your character as well.

What are the best parts of life on the tour? What do you dislike?

I like traveling around and experiencing the different cultures. Most of the places that I’ve been to, people have been friendly. There is an adventure in almost every country that you go to.

If you had to change anything during your formative years, what would that be?

It’s a 50-50 as I am generally supportive of College tennis but probably I wouldn’t have gone to college and instead turned pro – but I don’t know where I would be right now, so it’s tricky.

How do you reflect on your Tennis journey so far?

Doubles has been very good and I hope to translate that success onto singles as well. I am working on couple of changes and I would like the results to reflect those changes in singles pretty soon.

Taking it step by step right now and see where it takes.

We travel and play in quite far off places and often face players, say for example in Uzbekistan, where the local players receive good crowd support. I haven’t been to many places where there is a sizeable Indian community as such apart from Australia.

When there are people supporting you, one tends to naturally cheer up and give it that much more as a player.

To finish in the top-200 in singles and do as good as possible in doubles.

Rewrite the Stars – The greatest showman

If you had to choose another profession, what would that be?

Your nickname on the tour

Racquet that you use

Most memorable win of your career

The win against Tamara, the top-100 player

After the culmination of two successful seasons, Poker Sports League is returns in a new avatar. The league, which returns in a virtual avatar in its...
Read more
Andhra Pradesh

There are certain things in life that, growing up, we consider as a given. Going out with friends or playing football/cricket on weekends or...
Read more
Bihar

A geography teacher at a government school in Bihar's Siwan district can take pride in the fact that he has done something which is...
Read more
Others

India has a fan following for every sport, be it cricket, football, athletics, hockey or tennis. Sports stadiums throughout the country remained shut due...
Read more