Representing the country at the Asian Games at the age of 13, World Championships at 16 and Olympics at 19 - it is just a chunk of the achievements in the illustrious career of Shikha Tandon. One of the celebrated swimmers India ever produced, Tandon went on to win 146 national medals, and 36 international medals, including five gold.

Not only sports, very few of the Indian athletes like her have been able to pursue sports and academics at the highest level. Backed by her double master's degree, Tandon went to the USA to work with their Anti-Doping Agency. "I was always interested in sports and athletic since my childhood. At the age of eight, with high hopes of becoming a sprinter, I went to Reeth Abraham's athletics training academy in Bengaluru and found, they would only admit me when I would turn nine. I had a year for myself to train before joining the academy. My brother, who had asthma, was advised to take swimming lessons from the doctor. And my mom tagged me along to the swimming classes and thus began my journey," said Tandon.

She adds, "Eventually, I fell in love with water and I won my first national medal at nine. Things moved pretty quickly for me because I was naturally athletic. I enjoyed putting in the hard work and difficult training sessions. At several competitions, I was often the youngest swimmer to participate. and sometimes I used to be the only girl competing even when I was 13." "When I started swimming, I never had the Olympics as the radar. My whole process involved one day at a time and one tournament at a time. This approach of training and the cycle I followed helped me to achieve the milestones. Only after the World Championships, I realised I was pretty close to the Olympic time. The Olympics was a grand event for me and still being a teenager, standing next to the best in the world was a whole new experience," Tandon said.

Her parents, friends and coaches stood beside her, and because of their support, Tandon could juggle between swimming and studies. She says, "I have had tremendous support from my family, friends and coaches. I was also fortunate to attend a school and a college who understood my need to focus on both academics and swimming. It instilled in me the confidence to do what I wanted to do."

During the peak of her career in 2006, a shoulder injury came as a big setback for her. However, she recovered and pulled off a stellar comeback two years later. "The injury came just before the 2006 Asian Games, and I had to undergo surgery. However, I came back stronger again in 2008 and broke the national record. That phase, however, taught me a lot about myself. The confidence that it gave me to bounce back is something I still carry with me." 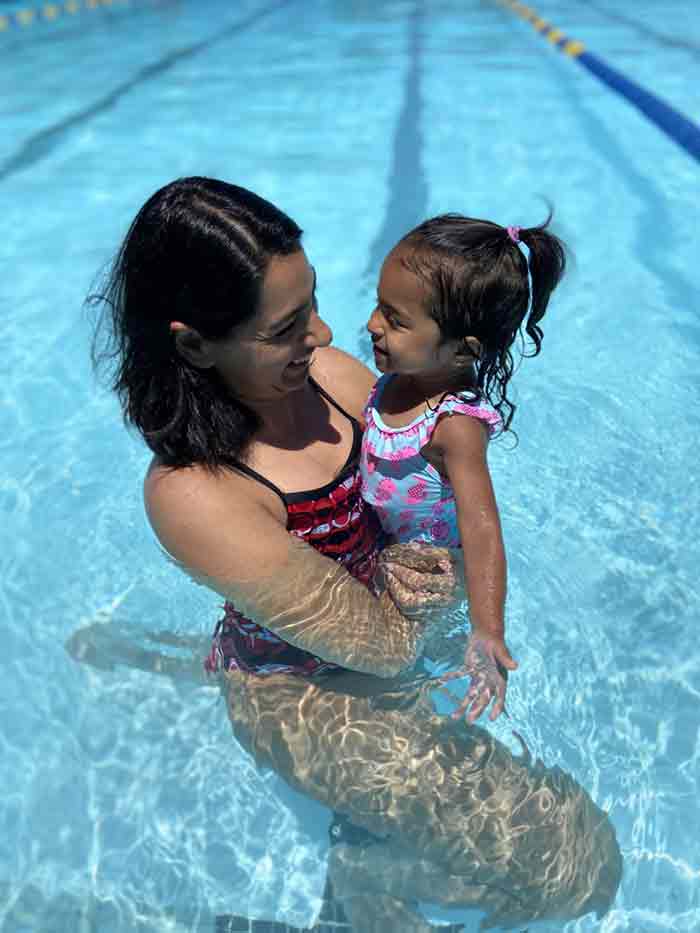 Shikha Tandon with her daughter in a swimming pool

"When I was swimming, I had to undergo plenty of drug tests during national and international levels. I knew how the system doesn't work here and I was always drawn towards the idea of levelling the playing field. I studied biotech, genetics and chemistry. I also have two master's degree - biotechnology and biology. So having the learning experience, it came together and my passion to be in sports let me be into the anti-doping agency. The role they had at the time fitted perfectly."

Talking about her present job involving the role of data and technology driving an athlete's performance, Tandon said, "We work a lot with elite athletes, recreational athletes and coaches. They collect a lot of data as a part of their training and competition. We help them understand these data and personalise their training according to data. My goal is to bring this technology to India and help the Indian athletes." Besides, she is also on the board of a non-profit organisation in India called Bridges of Sports, where they work with a Sidhhi community in Northern Karnataka. "We help them train, and my goal is also to see one of these athletes on the podium for India." Shikha Tandon posing with her family

She hails the present Indian swimming team, however, believes there is still a long road to travel. She quips, "The Indian swimming team has improved a lot. You can see the growth as they have made the B qualification time this year for the Olympics. But compared to international standards, they still got a way to go. The key is now how we are going to harness them, how do we finetune and optimise their training so they can be at their best. We can see how winning a medal at the Olympics in the shooting event has turned around for us. The same miracle needs to happen in swimming. One advantage it has is that it is a lifeskill. If we can get swimming pool access to more kids, some of them might funnel into competitive swimming."

"In the US, the number of kids engaged with swimming has worked well for the country. It is by default kids are learning to swim. Learning swimming from the age of 6 months to one year is not uncommon here. My daughter was in the pool when she was 10-month-old. I think it starts where swimming become a part of a country's culture. We could learn from them. We can also learn from the way the swimming programmes are structured here at the school level. The key is balancing academics and sports. Also, the use of technology can be of immense help. We have to identify the athletes and bring the best support staff and trainers to train them, which is crucial for their growth," concludes Tandon.