Just a month back rowing was named as the second healthiest sport in the Forbes list of healthiest sports. The only sport to beat rowing in this list was squash. This list took into account four physiological components of fitness along with injury rate and energy expenditure. Being second in this list is a testament to how tough the sport of rowing is and how tough the life of a rower can be. Now knowing all of these, imagine the courage one has to have to take up rowing being differently abled.

That’s exactly what Kritika Khanna from Jammu has done. 17 years back, Kritika met with a road accident during her 12th grade board examinations and lost a leg. This unfortunate incident might have been the end of the road for many in their lives, but not for Kritika. Instead, she decided to fight back and she did it the hard way, becoming the first ever female Para-rower from India.

After the accident, Kritika gave the bi-annual-examinations to complete her schooling that same year. She then went on to achieve a bachelors degree in Animations and then succeeded in attaining a MBA. She worked different jobs for quite some time in Jammu before moving to Delhi in 2011 as an investment banker.

Kritika was just 18 years old when she met with the terrible life changing accident. Instead of being bogged down by it, she bounced back by focusing all her energy to her passion of dancing and fitness and started posting about her journey online. According to her, it was her fitness minded attitude which led to her mentor and India’s only Para-triathlete, Col. GauravDutta, noticing her. 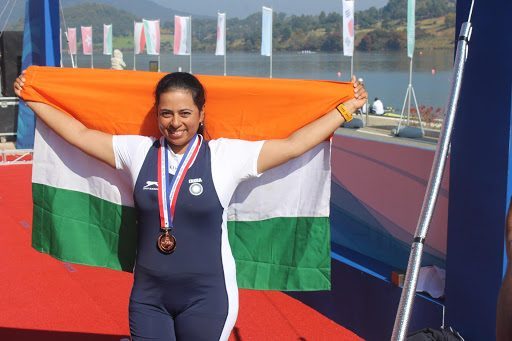 It was Dutta who sowed the seeds of becoming a rower in Kritika’s mind. She was at first hesitant about taking up something completely new but Dutta somehow managed to convince both Kritika and her parents and she decided to move to Pune in 2018.

At the age of 33, Kritika was staring down at a completely new road, something she never ever thought herself. She trained at the Asia Para Rowing Camp held at Pune for three months in 2018. But to her dismay, the event was cancelled and she had to return back home without achieving what she had set out for.

She was yet again called for a camp in May 2019 where she practiced with the Indian team for the 2019 Asian Para Rowing Championships. There were no setbacks this time, as the Indian team comprising of Kritika Khanna, Jyoti Radheshyam Gaderiya, Kuldeep Singh, K Narayana and Rohit Maradappa went on to strike a bronze medal in the Championships and Kritika became the first female Para-rower to represent India.

From being an amputee at the age of just 18 to representing the country at the age of 34, Kritika Khanna is an inspiration to many across India.