Manohar Parrikar was a true visionary in his contribution towards Sports 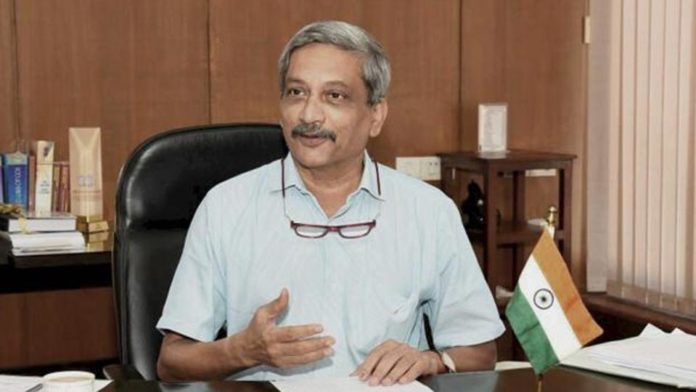 Goa Chief Minister and former Union Minister Manohar Parrikar breathed his last on Sunday, 17 March, after a valiant battle with pancreatic ailment. The 63-year-old leader was said to be in a critical condition.

Seen always dressed in his trademark half-sleeved shirt and leather sandals, Parrikar led a frugal lifestyle, but was a national leader from Goa with cross-cultural appeal who dominated the state politics for two decades.

He fought against time and won hearts until he reached the finish line. Parrikar was a true visionary of Goa and sports had always been an important priority for him.

The Goa Football Association (GFA) condoled on Monday the sad demise of Chief Minister. Churchill Alemao, the GFA President, mentioned that Parrikar would be remembered by the entire Goan sports, and especially the football fraternity, for declaring football as the official sport of Goa and setting up of Goa Football Development Council (GFDC) for promoting youth football in the state with a considerable annual budgetary provision.

Parrikar, who was a devoted sportsman, played football as a school student and then later at IIT Bombay. He also revered Sachin Tendulkar and would make sure to catch his favourite cricketer in action, when time would permit him during master blaster’s playing days.

Sports was immensely close to his heart and he probably left no stones unturned to make Goa a hub for sports. In every state budget under his provision, there was an extensive allocation for sports. In the 2019-20 budget, the distribution stood at Rs 314 crore.

Parrikar was hailed by the football fraternity when he presented the budget after coming to power in March 2012. In that budget session, he announced that football would thereon be the official sport of Goa. He also announced Rufino Monteiro, a cardiologist’s name as the Chairman of GFDC. GFDC got its premises within a few months, which was inaugurated by Parrikar in July that year at Patto-Panaji.

Parrikar put to rest all critics when there was speculation that lack of finances would stall the 3rd edition of the Lusofonia Games. As the chairman of these Games, he did everything possible to ensure the Games were organised, albeit a year later after it was postponed.

The multi-sport event, for Portuguese-speaking nations, was held in January 2014 across various venues in Goa, for which he ensured building new infrastructure, along with refurbishing existing infrastructure.

The Lusofonia Games Secretariat was set up in GMC Complex.

Parrikar faced the ire of many for organising the Lusofonia Games, however, the new sporting facility set up in Goa benefitted sports in the future.

The Games included 97 events in nine sports which were held across five venues – Fatorda Stadium, GMC Complex, Dr Shyama Prasad Mukherjee Indoor Stadium, Tilak Maidan, Multipurpose Indoor Stadium and Miramar Beach. Even after its conclusion, criticism about scams in tenders, corruption, and substandard equipment and infrastructure continued. Parrikar took it in his stride and ensured that Goa hosted the Games, in which India won 92 medals (37 gold, 27 silver and 28 bronze).

He envisioned Dr Shyama Prasad Mukherjee Stadium, which was built in a record time of 11 months maintaining international standards. The indoor stadium was created with a seating capacity of 4,000 people. It was inaugurated by the then Governor of Goa Bharat Vir Wanchoo in 2014. With a 131-metre sheet, the stadium is Asia’s first stadium to have the most extensive single-sheet roof. The stadium is geared with a variety of facilities like air conditioning, player change rooms and lounge, dope control and medical rooms, media centre, state-of-the- art-acoustics and parking facilities and maple wood flooring at playing field. It was first used for volleyball and basketball during the Lusofonia Games. Today, the stadium is used for non-sporting events too, including the opening and closing ceremonies of the International Film Festival of India.

The Athletic Stadium in Bambolim was also constructed for the Lusofonia Games. It is the first integrated athletic complex in Goa which is built according to IAAF specifications and norms. Its arena has all facilities for track and field events as well as throwing events. The inner area of the track is covered with natural turf to play football. He refurbished the Peddem Multipurpose Complex with a new running facility.

The P J Nehru Stadium in Fatorda was built as an exclusive football stadium in the year 1989 with 19,000 seating capacity and was refurbished for Lusofonia Games at a whopping cost of Rs 46 crore.

It has played host to several international sporting events,  including India’s qualifiers for both the FIFA World Cup and AFC Asian Cup. It has been the host for several national and international games. It is also the home ground for FC Goa in the Indian Super League (ISL). It was chosen as one of the six stadiums in India to host the 2017 FIFA U-17 World Cup matches in India in 2017. Parrikar monitored the progress of its refurbishment at every step, to comply with FIFA’s stringent standards.

Parrikar proved to be instrumental when the Fatorda stadium hosted some of the prestigious World Cup Under-17 matches. He provided the necessary host city agreement and all guarantees as required by FIFA. He was also prompt, despite his sickness, in asking the Government officials to immediately provide the necessary guarantees for hosting the FIFA U-17 Women’s World Cup matches in Goa in 2020, the bid for which was won by India (AIFF).

When a little known shooter Tejaswini Sawant was in urgent need of financial help to participate in an ISSF shooting world championship in Germany, Parrikar gave her Rs 1 lakh from his own pocket, which enabled her to participate in the competition in 2005. She rose up to the ranks and became the first Indian woman shooter to win a gold medal at the World Championships.

In 2012, Parrikar took into consideration recommendations made by the Pendse Commission which had conducted an inquiry into the 2001 India vs Australian ODI ticket scam. These were the recommendations that were earlier scrapped by the Congress government in 2005 under the leadership of Pratapsing Rane, when it revealed that the then minister Dayanand Narvekar who was president of Goa Cricket Association and other office bearers were indicted.

Parrikar had also made provision for grant-in-aid for Goan I-League clubs and had agreed to formulate a new enhanced financial pattern of assistance for GFA and football clubs.

Parrikar remained one of the few visionaries of Indian politics who had fuelled a dream for the country to make it big in global sports.

Prime Minister Modi interacted with fitness experts and influencers from across the country to mark the one-year anniversary of the 'Fit India Movement.' The...
Read more
Football

The Indian Premier League (IPL) has come as a much-needed respite for sports lovers who were famished by the drought of live sports for...
Read more
139,557FansLike
13,677FollowersFollow
7,858FollowersFollow