It was a conspiracy against me: Sanjita Chanu

The multiple Commonwealth Gold winning weightlifter Sanjita Chanu of Manipur whose suspension has been revoked by the International Weightlifting Federation (IWF) said that she suspected a foul play on her emerging career.

Sanjita also rued that for no reasons, she had to waste at least nine precious months of her career.

“See, I have been always maintaining that something is wrong. Someone might have done conspiracy against me to trouble my growth. I have never ever taken anything which is banned or against the sport. I want to know the reason why this is done to me. It’s impossible and I always knew that I will come up with the truth. Though it’s very frustrating, I’m happy now. God listened to my prayers,” Sanjita told The Bridge.

The International Weightlifting Federation (IWF) put a provisional suspension on Sanjita in May last year after she was tested positive for a banned anabolic steroid. The IWF has been evoked by the world body on Wednesday.

Sanjita who has won two Commonwealth Games medals in 2014 and 2018 said that this period almost ruined her career. “It’s been very difficult. I thought it’s over. I felt ashamed as well in front of my countrymen. I also pleaded to the office bearers of the federation that I haven’t done anything wrong. But what would they do? I just kept praying and crying in front of God,” Sanjita added. Sanjita Chanu with her gold medal after winning the women's 53kg weightlifting event at the 2018 Commonwealth Games in Gold Coast.

“If she is fit, we will try to include her in the team for the tournament in Thailand (Olympic qualifier). It is for her and the coach to decide,” Yadav said.

The champion weightlifter who dreams to win Olympic gold said that she is desperate to get back to the training camp. But she would need at least one month to get into the shape.

“I was down. Now, I would like to focus on my fitness in the next 30 days or so. I’m more than eager to join the team. I was going in the right direction but this episode ruined everything. It broke my heart,” Sanjita added. After maintaining her innocence in the incident of testing positive for banned substances, Sanjita Chanu met Manipur Governor for help. (Image: The Telegraph)

Sanjita who has proved to be a mentally tough individual over the years has thanked everyone who stood behind her in the hour of crisis.

“It has been a tough journey. I’m thankful to my family members and the people of Manipur for their support,” she said.

Sanjita also had to write to WADA to speed up the time of announcing the result.

“The delay in result management had already made me missed two major international events (Asian Games 2018 and IWF World Championship,2018). The delay is spoiling my chance of Olympic qualifiers. Further, the delay amounts to the mental harassment of an athlete,” she wrote in the email. 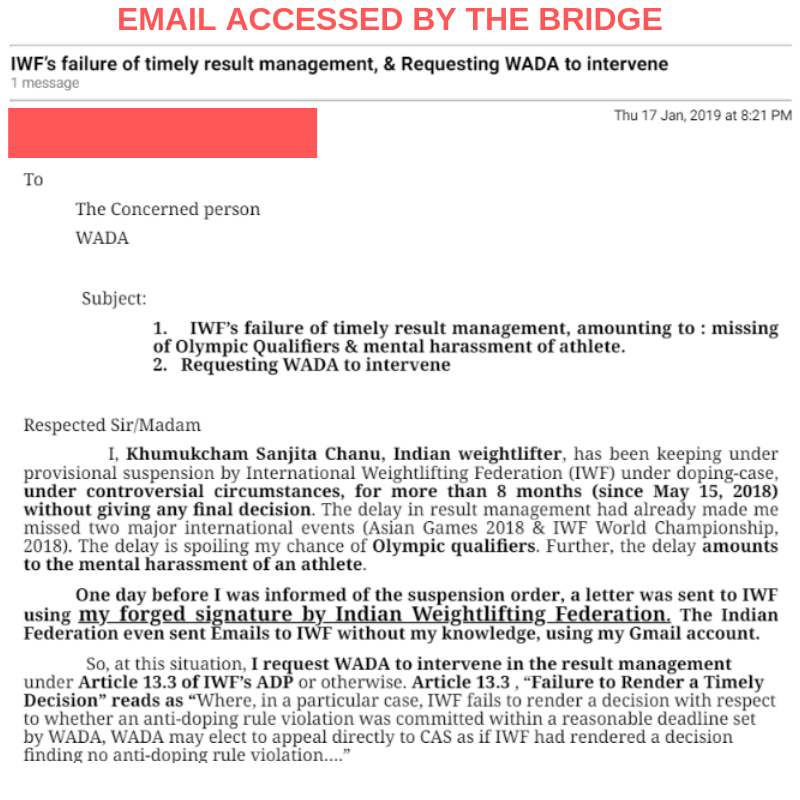