2018, the first complete year India had an Olympian as sports minister, might be remembered in the future as the year some sporting superpower seeds were sown in our fertile land. Sure, there were giant-killing, history-scripting acts by our athletes which expanded our chests, in some sports more than others, but what was even more heartening for the Indian fan - tired of seeing sports becoming victim to politics for decades - was the role played by the sports ministry led by Colonel Rajyavardhan Singh Rathore.

The 'Year End Review 2018' press release brought out by the Sports department of the Ministry of Youth Affairs and Sports earlier this week, in laying out its achievements of the year, is therefore somewhat different from such releases brought out in previous years. Two things which stand out from this year's document are the amount of cash awards disbursed to athletes by the government and the streamlined focus on identifying talent.

Speaking about his vision for the country while on the campaign trail for the Rajasthan assembly election earlier this month, Rathore had told Zee News, "There is a wrong notion here that sports are entertainment and that all learning takes place in classrooms. I believe that some of life's biggest lessons can be learnt on the fields while playing with friends."

True to this vision, 1178 talents were identified at the 1st Khelo India Games, the new and revamped national-level multidisciplinary games for under-17 schoolchildren, who will be put into special training programmes, with Rs 5 lakh to be spent on them each annually for the next eight years. Around 1000 talents will be similarly picked from every edition of the Khelo India Games. Swimmer Srihari Nataraj, shooter Manu Bhaker, and weightlifter Jeremy Lalrinnunga were some of the bright stars who broke through at the first edition. The Sports Minister has been a favorite of all athletes across the length and breadth of the country.

With a view of letting young athletes get access to the best training without having to travel long distances, various private, state and SAI (Sports Authority of India) academies across the country were accredited. These academies will look after the training, boarding and tournament expenses of the athletes.

The country's first dedicated sports university, the National Sports University in Imphal, started classes this year. The university campus also functions as the national training centre for some sports disciplines. More branches of the university are planned in other states, Rathore has said. The ministry has also funded a sports management course at the Rohtak IIM, "in order to strengthen the overall sports ecosystem in the country and to develop expertise in various sectors." (Year End Review 2018)

Also Read: Games period to be made mandatory in schools next year

Having a figure of Rathore's stature at the helm of the sports ministry - with the shine of his historic Olympic silver, the steady hand-eye coordination of a shooter, his experience of having fought militants in Kashmir - is doubly inspiring for young athletes. Speaking to The Bridge in October, Youth Olympics gold medallist 15-year-old Jeremy Lalrinnunga had said, "Meeting Rathore has to be one of the best moments of my career so far. I was constantly looking at him in awe."

In a ground-breaking move, the sports ministry approved the participation of kho kho team at the 1st International Kho Kho Championship in England in September. A statement by Rathore said, "The approval was given for the first time in relaxation of extant guidelines of the ministry which lay down that sports disciplines like kho kho, which are categorized as 'Others', will not be eligible for financial support for participation in international sporting events." Such promotion of traditional sports on the international stage has come as a blessing. Some have even started counting the number of medals that will be assured additions to India's tally when kho kho will be introduced at the Asian Games.

In another very positive move, the sports ministry doubled the existing rate of pension for medal winners in international sports events.

According to the Year End Review, Rs 11.2 crores was disbursed as cash award to medal winners in international sports events and their coaches. Besides this, Rs 65 lakh was disbursed as financial assistance to "outstanding sportspersons of the past, living in indigent circumstances, who had brought glory to the country in sports." 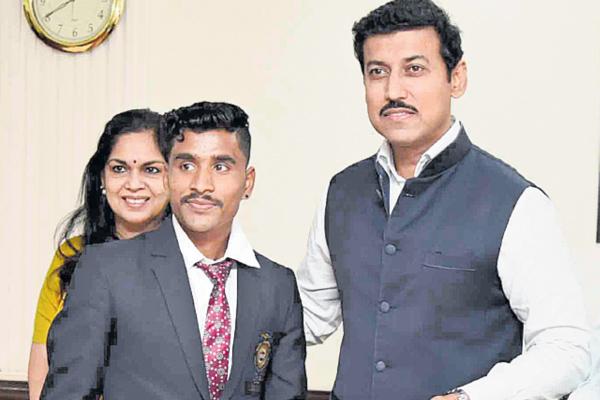 Col. Rathore with Govindan Lakshamanan: A gesture which moved the nation.

One of the notable inclusions in the list of beneficiaries of this scheme was Govindan Lakshmanan, the middle distance runner who had history cruelly snatched away from him at the Asian Games. He clocked in third at the 10,000-metre race, basked in the glory of winning India's first medal in the discipline at the Games since 1998 for 20 minutes, before getting the rude shock of news that he had been disqualified. Replays showed that his left foot had indeed gone out of his lane at a bend for one short second, but that one second was enough to break the country's hearts. Less than a month later, Rathore tweeted a picture of him handing a cheque to the almost-medallist and saying, "A minor technicality led to Lakhshmanan's disqualification. Regardless, he is our champ and we stand by our champions."

We can safely assume that when Rathore replied to a query from the Congress in the Lok Sabha on what the government was doing for sportspersons by saying, "The need of the hour is to free sports from the clutches of politics," it was not empty rhetoric. "The young sports minister is doing good work. Ask him good questions, you will get good answers," speaker Sumitra Mahajan had said.