For the past decade, Indian Hockey has been tangled in an unending circle; it starts off with hope and ends in agony and despair. It won’t be an exaggeration to state that the only constant in Indian Hockey is change.

Hence, when Hockey India decided to sack Coach Harendra Singh from the top job, it didn’t come as a surprise to many. What has puzzled Hockey fans, even more, is India’s decision to not participate in the upcoming Pro League, thereby missing out on some valuable ranking points which could make India’s path to seal a Tokyo 2020 spot even more difficult.

Hockey India has now begun their search for a staggering 12th new coach since 2009-10 and this constant changing and chopping of the coaching staff has helped none. Without a permanent coach, the preparations are yet to begin and most players are clueless about whether they are to be selected or not.

Even more, both the men’s and women’s team are not scheduled to play a single match till March.

Lack of a competitive schedule means India might be pretty unprepared before the critical Tokyo 2020 qualifiers, scheduled to take place at the end of the year. But the situation wasn’t always this bleak.

The year 2018 was touted to be the long-awaited game-changing year for Indian Hockey at the world stage. With the Commonwealth Games, Asian Games, World Cup and Champions Trophy all scheduled in the same calendar year, India had just about enough opportunities to cement themselves as a powerhouse of hockey before Tokyo 2020. However, it turned out to be yet another year of missed chances and failing to live up to the heightened expectations. 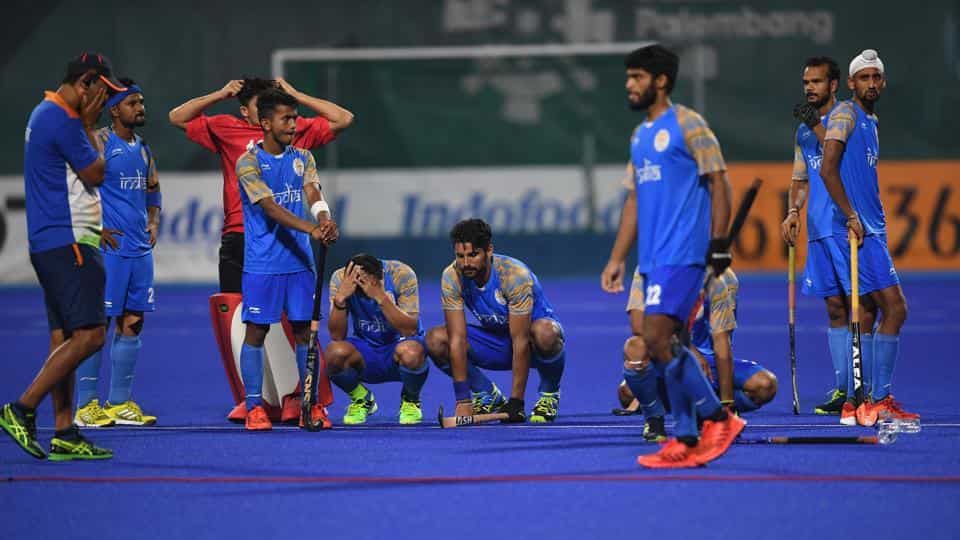 A loss in a penalty shootout to Malaysia at the Asian Games meant that India not only lost out on the gold but also missed out on their easiest path to seal a spot at Tokyo 2020.

After taking over from Roelant Oltmans in 2017, Sjoerd Marijne was still at the helm of the men’s national team when India travelled for the Commonwealth Games at Gold Coast. However, the loss to England in the bronze medal play-off sealed his fate and Harendra Singh was appointed for the top job.

Under his tenure, India began on a bright note; a string of impressive victories ensured India reached the finals of Champions Trophy at Breda, Netherlands. However, the impressive run was soon halted at the Asian Games in Jakarta-Palembang where India were the firm favourites to retain their gold medal.

A loss in a penalty shootout to Malaysia meant that India not only lost out on the gold but also missed out on their easiest path to seal a spot at Tokyo 2020. After the World Cup in Bhubaneswar, where India lost out to The Netherlands in the Quarter-finals it only seemed certain that the axe would come out sooner than later. But was it the correct decision?

While the results at Asian Games were certainly not something to be proud of, the attacking prowess of the new Indian Hockey team has been impressive, to say the least. There has been a notable improvement in the performances of most players and India were pretty unlucky to go out in the quarter-finals to the Netherlands.

Even then, India recorded its best ever performance in a world cup for 34 years when they managed to make it through to the knockout stretches. The men in blue also made it through to the finals of the Champions Trophy showing glimpses of what they are truly capable of under their Indian Coach.

Hence, the sacking does bring into question whether the decision was a well thought out one or yet another reactionary one to justify a loss and pass on the blame?

The sacking of Harendra Singh also brings into limelight the mess that hockey is in.

In 2017, when Marijne was appointed as a coach for the men’s team, he had no previous experience of coaching a men’s team at international level. Likewise the same was true with regards to the women’s team with Harendra being appointed as the coach. It took a loss at the Commonwealth Games for Hockey India to finally review their strange decision and interchange the roles of the two. This was in all likelihood the first such exchange in international hockey. But both the teams by then had already missed out on a much-expected medal at the Commonwealth Games.

Furthermore, India’s decision to not feature in the Pro League is another shining example of the lack of strategic planning inside Hockey India. Since most other top hockey nations will be competing in this inaugural league India’s absence will make it very difficult for them to gain ranking points.

While India will compete in the Hockey World series, even if they end up winning the competition they will only be gaining as many points as those who finish 8th in the Pro League. Thus India in all likelihood might lose out on a couple of ranking places, thereby facing much more competitive opponents in the year-end Olympic qualifiers than they would have otherwise.

Coming to the women's team, it seemed to be a step in the right direction when India competed in the 2016 Olympics which was their first Olympic appearance in 36 years. Additionally, the team had a decent run in 2018 which, it was hoped, would culminate in an Olympic qualification. Indeed, it would seem that qualification for the women's team was a priority for Hockey India as well since it has used it as a justification for their pullout from the FIH Pro League, as per a recent PTI report. Chances for the women's team qualifying from the Pro League would have been slim since, ranked 13th in the world, a top four finish and a consequent chance to play in the Olympic qualifiers would have been difficult. Hockey India has since alleged that the FIH "is only interested in giving importance to European team" as quoted by PTI. A lack of clarity over the ranking points system and Olympic qualification process is what led Hockey India- then headed by by current FIH President Narinder Batra, to pull out of the revolutionary Pro League. Meanwhile, Hockey India officials maintain that both the men and women will have a better chance of qualifying for the Olympic qualifiers by playing in the World League Round 1 and Round 2.

It’s pretty unclear what lies ahead for Indian Hockey. But if Hockey India doesn’t clear up the mess pretty soon, India will be back to where they were a decade ago- directionless and aimless.