Rock climbing still may not be a popular sport among Indians, and although it is somewhat dominated by men, Bengaluru's Gowri Varanashi stepped up as a bellwether to revolutionise the sport in the country and to inspire more women to take it up.

An adventure enthusiast since her childhood, Gowri made headlines in January 2018 when she became the first Indian woman to execute the climbing route 'French Indian Masala'.

The small town of Badami located in Bagalkot district of northern Karnataka was once the capital of the Chalukya empire under Pulakeshin because rugged sandstone cliffs protected the area on three sides. Today, these steep surfaces and bulging rocks make Badami the hotspot for climbers and the 20-metre-high French Indian Masala is one of the most challenging climbing routes in the vicinity, a treat for climbers. Gowri, who was pursuing higher education in environmental studies in the US, visited India for a five-month break and it is then she came across a climber's page on Facebook, where she was introduced to this route. "I was already an amateur climber at that time and had climbed many terrains in the US. So after flying down to my home in Bengaluru, I was interested in exploring the local climbing scenario. I found men mainly dominated it, and rarely any women took up this sport. This was when I came across the French Indian Masala route," said Gowri in a telephonic conversation with The Bridge from the US.

While she was exploring the options for a grant, she found  The American Alpine Club and The North Face had opened applications for their “Live your Dream Grant”, where, like every year, they sought to fund adventurers who wish to push their limits. Gowri was impressed by the opportunity and applied for the grant. She adds, "It was a significant opportunity, and I didn't want to miss it. I mentioned in my statement of purpose that I wanted to popularise climbing among Indian women and built a support system for them. A couple of days later, the grant was approved, and I was ready to roll."

Gowri visited the site of the climb on 11 January 2018, and the moment she saw the route, she knew she was going to conquer it. She did thorough planning, and for seven days, she worked on the course. It was on the eighth day, 19 January 2018, Gowri gripped quarter inch rock holds with her fingers and slowly climbed up the line only to become the first Indian woman to climb a route graded 5.12c (Yosemite Decimal System, US) or 7B+ (a French rock climbing rating). "It was the hardest climb of my life. I spent days just making one or two moves, but in the end, it turned out to be smooth. I took my own time to figure out the first crux, which is at the start of the climb until the first two bolts, but I figured out the sequence. It took me multiple sessions to figure out the sequence for the second crux, which is a bulge, or a mini roof. But as soon as I had a grasp on it, I was able to climb the entire route without resting on the top rope. I completed it clean in my first attempt," said Gowri.

Gowri was delighted that her feat had motivated others to take up the climb, as she discovered a group of women from Delhi showed interest to join her in the climb. She communicated with them and later again went on climbing the French Indian Masala route after a month.

Growing up in Bengaluru, Gowri always had been curious about nature. Studying at the Centre for Learning, an alternative school located at Magadi Road, in the outskirts of the city, Gowri realised her profound interest in wildlife and adventure. "I chose to go to the Centre for Learning with the sole interest of studying about nature and wildlife. My father was into photography, from whom I picked up the interest in wildlife photography. I would take it on school trips and practice photography skills, and my father used to mentor me. Photography allowed me to increase public awareness of wildlife. Besides, at the centre, I was doing projects with snakes and butterflies, it gave me inner peace," says Gowri. 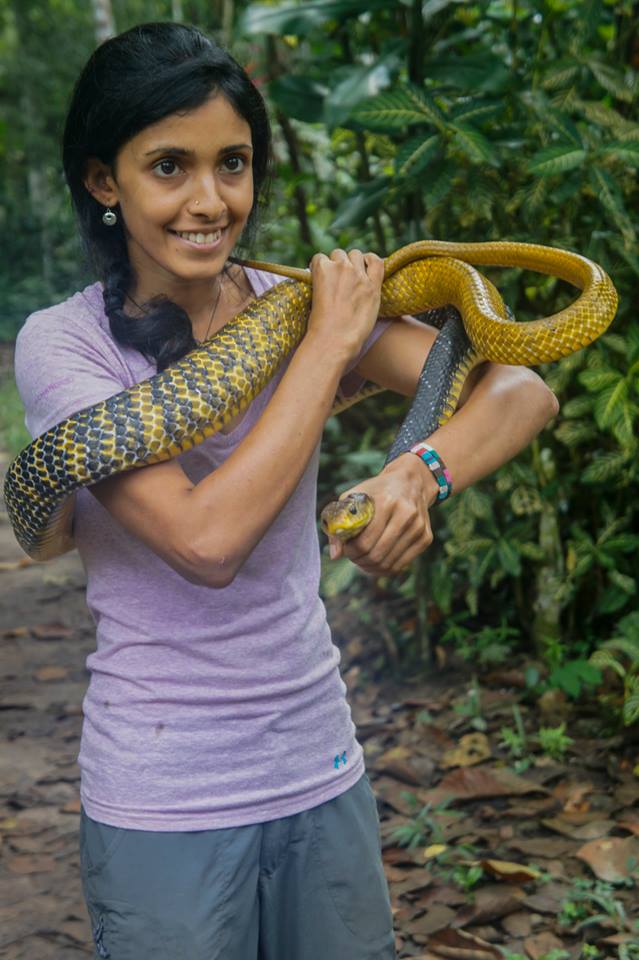 After finishing school in India, Gowri went to the US for her higher studies, and this is where she came across a climbing gym. With the thought of giving it a try, Gowri realised she was hooked into it and learnt all the basics of climbing. After two years of training, she hit the outdoors, slowly started climbing several rocky terrains across the US. She has so far climbed in New York, Arizona and California at the famous Yosemite National Park.

Gowri is an avid wildlife conservationist and a photographer who has worked with local communities in the Amazon rainforest to help provide sustainable employment and habitat protection. She stays in the upstate of New York with her naturalist and author husband Paul Rosolie, where she works with school children and takes them outdoors for nature education. In a year, she divides her time between India, Peru and the US.

It has been three years, Gowri has taken climbing seriously. In her early phases, she went on climbing in Ramnagara with her friends from the Bangalore Climbing Initiative (BCI) who still actively initiates new routes and conducting beginner climbing workshops as well.

"I realised that despite having a lot of strong women climbers in India, no one tried to push the barriers, and it was mainly a male sport. I thought that I would do it myself so that more women climbers come forward to not just practice in the climbing gyms but also on actual rocks too," reiterates Gowri. The motivation to mentor and getting more women to try out climbing led Gowri to organise India’s first women’s outdoor climbing event — CLAW or Climb Like a Woman. Gowri created a team with 4 other women climbers from India who helped her in making the event happen. The first event in Hampi, Karnataka, took place in December 2018 and was attended by 30 women. Surprisingly, of these 30, 19 had no experience.

"Since I had applied for  The American Alpine Club grant, after successfully climbing the French Indian Masala, they approached me to use their grant to initiate more such climbs and popularise the sport among my community. I thought this would be a good opportunity, and hence, I organised CLAW. I realised that in India, there are not enough ventures to mentor and guide to teach people this sport. Often when beginners first start, they have to climb with stronger climbers to learn. This can be quite intimidating as stronger climbers will teach beginners on one or two easy boulders and then naturally make their way to harder climbs and beginners are left trying things randomly way above their skill level. And since, there were not enough women pursuing climbing I tried to bridge the gap between men and women climbers, which made me establish CLAW. This year, we will again organise another event in November at Hampi," concludes Gowri.

As for her personal goals, she wants to venture out different routes in Thailand this year and also aims to climb the 'Samsara' route in Badami, which is another challenging climb in India.