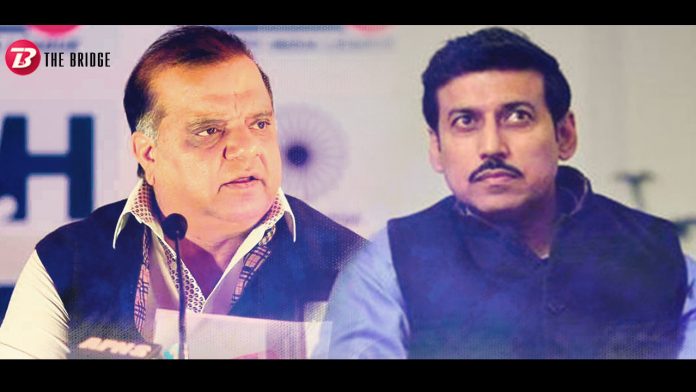 India aspires to be a global sporting power and the exploits of our sportspersons over the years are more than an adequate ray of hope that we can become one! But for any nation to emerge as a sporting powerhouse, it is critical that government bodies and national sports federations work together in the broader interest of development of sports in the country.

Sadly, in India, the administrative logjams have been a bugbear for over many decades now. And it has become more pronounced in recent months with the Sports Ministry and the Indian Olympic Association (IOA) throwing enough indications that both are not on the same page.

That’s the last thing the country needs when it is looking to up its ante as a sporting power. It was only in December 2017 that Narinder Batra took over as IOA President unopposed, and every sports lover would have sincerely hoped that the new IOA President will operate in close coordination with equally newly-appointed Sports Minister Rajyavardhan Rathore (he took charge only in Septmber 2017) and is a 2000 Athens Olympics silver medallist shooter.

Call it a coincidence or call it anything but the Sports Ministry under the current NDA regime already had three Sports Ministers.

Sarbananda Sonowal took charge in May 2014 (when the NDA government assumed power) and later made way for Vijay Goel in July 2016 after the former was chosen as the Assam Chief Minister. Goel served for little more than a year before being supplanted by Rathore. One is not suggesting that too much of ‘chopping and changing’ is not suitable for Indian sports, but a steady mechanism must be in place to accelerate development of games across the country.

If we delve deep, there is enough criticism in the public domain in recent months to suggest that both the Sports Ministry and the IOA are not on the ‘same page’. It all started in February 2018 when both Sports Minister Rajyavardhan Rathore and IOA President Narinder Batra at the same function, appeared like speaking in different voices.

To be honest, Rathore made a pertinent point when he dwelt on the need for national sports federations to focus on being financially independent and generate revenue on their own so that they are in a position to send their respective teams for various international competitions. While at the same time, it was stressed that the government would continue to serve as the biggest sponsor for non-cricket sports in the country. The Sports Minister, on that occasion, had only asked federations to make the most of the increasing corporate interest for non-cricket sports so that overreliance on the government grant for sending teams for international competitions at least gets diluted.

One cannot fault Rathore on this front, as he was merely offering a thought-provoking futuristic perspective. The IOA President, on his part, sharing the same stage, asserted that no federation could send teams to international meets without a government grant. The Sports Minister was looking at a future funding roadmap and never said non-cricket sports would not get a government grant. Both Sports Ministry and the IOA again grabbed the spotlight a month later over clearance of extra officials for the 2014 Commonwealth Games. Of course, better sense prevailed, and the ‘extra officials’ were eventually cleared for the CWG.

Fast-forward to July 2016 – this was perhaps the most significant sore point when the Sports Minister failed to turn up to grace the AsianGames Torch Relay function in New Delhi. Rathore had intimated to the IOA that he was busy with an important assignment in Kochi and that prompted IOA to invite Rathore’s predecessor Vijay Goel, who accepted the invitation. One is not sure if the IOA President scored any political points with the presence of Goel at the function. But for sports fans, Rathore’s absence was a disappointment.

A cordial working relation is the need of the hour, but it wasn’t in the realms of possibility at least for now. The Sports Ministry asks the IOA to relax selection norms for specific sports – it wanted athletes who are strong medal prospects to feature in the Asian Games but could not qualify due to lack of international exposure or non-participation in ranking events to be accommodated.

Also read: Dear IOA, kindly get your act together

The move of the Ministry needs to be lauded but indeed not the ‘timing’. The Sports Ministry’s July 18 proposal – barely a month before the Asiad kicks off – left us wondering how such a proposal was not put forth much earlier. The IOA respected the Sports Ministry’ proposal and convened a meeting of its Core Committee and Legal Committee but politely stuck to its guns, refraining from making any changes to the Indian contingent.

The IOA again hogged the headlines when it came to the fore that non-affiliated sports federations – kurash, pencak silat, sambo, bridge, soft tennis, sepak takraw, sports climbing and roller skating – would have to pay for their ceremonial, training and in-competition kits (these kits together cost around Rs 30,000). The whole issue was poorly handled by the IOA with its members speaking in different voices until IOA President Narinder Batra putting a lid to the uncalled-for controversy, assuring non-affiliate federations that the money they’ll spend on procuring these kits will be reimbursed by IOA, terming the whole debate as a ‘communication gap’.

The Sports Ministry deserved a pat on their backs for swiftly swinging into action and assuring athletes that all their expenses will be taken care of. The big question is: was this controversy necessary ahead of the Asian Games?