Back in the corridors  of time, in June, 2017, there came a deluge of ecstacy for Indian tennis. The winds of change had begun to blow after almost 19 years. Standing tall at 6’2”, a warrior emerged liked a phoenix to take the entire nation by storm. Ramkumar Ramanathan became that idol who infused life into the singles of Indian Tennis.

The towering 22-year-old Ramanathan swept off his fans as he bent down to touch the ground and seek its blessings as a gesture of gratitude for that win which put Indian tennis on the map of recognition once again on the ATP tour.

Ranked 222nd at that time, the Indian qualifier toppled the then World No 8 and top seed Dominic Thiem to register the biggest wins of his career at the Antalya Open in Turkey.

While the last top 10 singles victory for India came in 1998, that is 19 years back when Leander Paes beat the then World No. 1 Pete Sampras in straight sets at the Pilot Pen International Tennis championships, Ramanathan’s win last season was a welcome change for the singles of  Indian tennis after a gap of almost two decades.

Fast forward to the present, two days back, in the recently concluded Hall of Fame Open, Ramkumar Ramanathan fell a little short from laying hands on the silverware and in turn a chance to dismantle another top-50 player in his career.

Ramanathan, 23, would have become the third player after Yuki Bhambri and Prajnesh Gunneswaran to register a top win in the same year. He would join the elite few in Indian tennis who have managed to register multiple biggest wins over top players through their career.

Playing against the American, Steve Johnson who was ranked 48 at the time of the Final in Newport, Ramanathan had his chances to get another monumental win and the biggest of his career on the ATP tour.

An upward journey for the Men’s singles of Indian tennis since then. 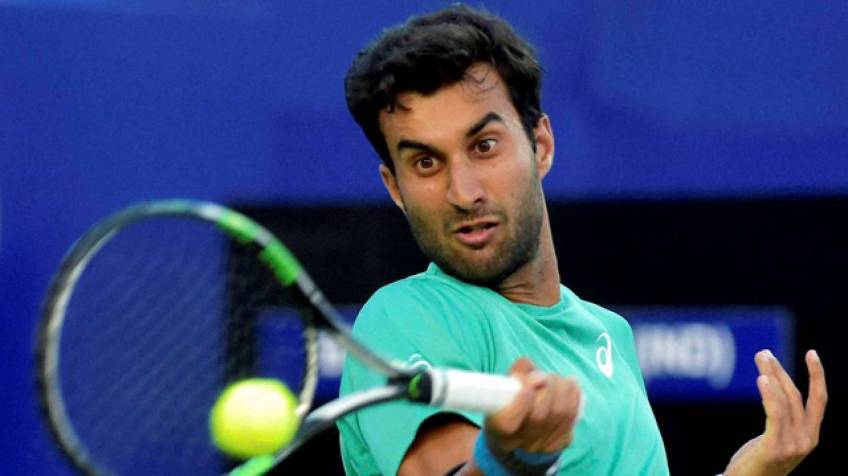 Following his compatriot, Ramanathan’s footsteps, India’s top ranked Yuki Bhambri pulled off a scintillating upset in August 2017 again as he bundled out the then World no. 22 and defending champion Gael Monfils in the third round of the ATP Citi Open.

The top 50 win once again gathered tremendous praises from the entire tennis fraternity. Bhambri displayed some terrific down the line winners in that match and was toasted to applauds from all over the globe. His brilliant shot making was indeed the talk of the tennis world then.

This year, the Junior Australian Open champ, Bhambri went ahead and enjoyed basking on the Sunshine tour of Indian Wells and Miami. His next top win came in March this season when he ousted World No, 12 Lucas Pouille in the second round of the, BNP Paribas Open in Indian Wells.

The 25-year-old Bhambri has also registered wins over Pablo Carreno Busta at the 2014 Chennai Open and Jiri Vesely at the Kaohsiung Open, an ATP challenger event in 2015. The Indian southpaw from Chennai, 28, Prajnesh Gunneswaran reached his first ever Main draw of an ATP tournament at the Mercedes Cup in Stuttgart in June this year. He shocked World No. 23, Canadian sensation Denis Shapovalov in three sets to clinch his first and biggest ever win on the ATP tour.

Prajnesh, then ranked 169th pulled a scintillating upset in the first round. The win was even more commendable given Shapovalov who was deemed to be a tough opponent and the one who already  has a super win over the Spanish Great Rafael Nadal at his resume.

In the Davis cup, Prajnesh  managed to pull off a brilliant win over China’s rising star Wu Yibing. World No. 263 then, Prajnesh Gunneswaran became a saviour for India as he helped his team secure a 3-2 comeback win over China at the Davis Cup Asia/Oceania Group I second round tie held at Tianjin, China.

A scoop from history

On the ATP tour, each match counts, every win comes with loads of experience to gain irrespective of a win or loss. What makes each win fascinating is that it forever stays etched in the records and lends a source of inspiration for the athletes to take the journey ahead with renewed enthusiasm.

As a country, we have some brilliant such top wins accredited to our tennis players.

We take a dive just in time to retell those fascinating, exhilarating moments from the past and relive the glory of Indian tennis that is only getting better with each passing day. Former professional Indian tennis player, Padma Shri Somdev Devvarman has had  notable wins against top rankers on the ATP tour. Back in 2009, Somdev made his first ever  tour level final at the Chennai Open. While he was then ranked 84, Somdev defeated Carlos Moya, the then World no. 42 and the then No 25, Ivo Karlovic. Marin Cilic of Croatia to whom Devvarman had lost the final of the Chennai Open was his next prey in the top wins of his career in the Legg Mason Tennis Classic.

In 2011, Somdev continued his heroics. At the ATP Masters 1000 event of the BNP Paribas Open, the Indian pulled off one of the biggest upsets. He thwarted the then World No. 22 Marcos Baghdatis in the second round in straight sets including a bagel second set while he himself was ranked 84th in the rankings that time.

At the Sony Ericsson Miami Masters, an ATP 1000 event, Somdev managed to register a sensational 7-6(5), 7-5 victory over world No.31 Milos Raonic of Canada to enter the third round of the men's singles. At the Serbia Open in 2011, Somdev stunned world no. 26 Guillermo García-López in the second round.

Somdev  had a terrific run in that one month in 2011 having beaten three top 50 players - He had defeated the then World No 20 Marcos Baghdatis and Xavier Malaisse at the BNP Paribas World Tour Masters at Indian Wells. He also beat  Janko Tipsarevic (44) in the Davis Cup tie against Serbia before coming to play on the US circuit. The 2007 Davis Cup captain Ramesh Krishnan was a face of the singles of Indian tennis in the 1980s.  Three-time Grand Slam quarter finalist and Junior Wimbledon and French Open Champion, Krishnan has to his name one of the biggest victories of all time. Krishnan, winner of 8 singles career titles who was ranked 51st at that time  beat the then World No. 1 Mats Wilander of Sweden in the 1998 Australian Open second round in straight sets.

Leander Paes, winner of 8 doubles and 10 mixed doubles Grand Slam titles is considered one of the best doubles and mixed doubles players of all time. A former Davis Cup team captain, he now  holds the record for the most Davis Cup doubles wins with 43 victories surpassing Nicola Pietrangeli who has 42 victories.

It was also 20 years ago that Paes defeated Pete Sampras (the then World No.2) 6-3, 6-4 at the New Haven ATP tournament in 1998 in what was one of the most supreme wins for the Indian in his singles career.  In 1997, he made his best singles performance in a Grand Slam, getting to the third round of the US Open, beating Carlos Costa and Arnaud Boetsch. In the Davis Cup, his major wins came against French duo of Arnaud Boetsch and Henri Leconte in 1993, Wayne Ferreira in 1994, and Goran Ivanišević in 1995

In 1995, ranked No 130, he beat Croatia's World No 7 Goran Ivanišević who was a two time Wimbledon single finalist. Paes also ousted Jan Siemerink, in 1996, then ranked No. 20, in the Davis Cup.

The Men's Singles top wins serve as a beacon of inspiration and hope.

Being able to get past the top rankers  on an ATP tour can be an exhilarating experience for both the players and fans alike. While it works as a confidence booster for the athlete, it can be an adrenaline gush for fans.

“Having big wins can be monumental in a player's career,”  so rightly India’s former ace tennis star, Somdev Devvarman was once quoted in an interview with The Hindu.

In the times to come, there will be a definite surge in the number of such monumental wins over higher rankers for our players. With Yuki Bhambri managing to enjoy an injury free season and Ramkumar Ramanathan making steady improvements in his play and mental strength, Indian singles tennis is in golden hands.