Deepika Kumari has been around for a while now. In fact, she is the most recognizable name in her sport. That kind of recognition did not come easily for Kumari.

Somewhere around the country, a young girl aspiring to be like Deepika Kumari would have woken up in the morning and sat across her television, watching her take aim to shoot her final arrow. A single arrow which would soon bring Kumari her first Archery World Cup Gold medal in five years.

Or at least I wish that would have happened. After all, this is the least India's best archer deserves.

Deepika Kumari has been around for a while now. In fact, she is the most recognizable name in her sport. That kind of recognition did not come easily for Kumari. She had to shoot down innumerable obstacles to ascend to a place high enough for everybody to see her.

​Deepika Kumari, as many other athletes, had modest beginnings. Born into a family of an auto driver and a nurse, Kumari's parents wanted her to become a doctor. Things would have gone that way as well, if not for Kumari's cousin Vidya, who had been learning archery at the Tata Archery Academy.

​Vidya Kumari had shown Deepika dreams of the academy. However, fate played a crucial hand, barring her entry into the academy due to a failed competition. Nevertheless, a young Kumari showed perseverance and persistence to force her way into a field whose doors have been slammed shut for young, aspiring female athletes like herself.

Contrary to her parents' warnings, Kumari went and got herself enrolled in the Arjun Archery Academy. Her parents were not overly unsupportive but instead were laying out an argument heard by many aspiring athletes- sports in India is not a viable career option.

​Nonetheless, Kumari took to archery and the rest, as they say, is history.

On her way to the top

Deepika Kumari began competing professionally in archery in 2006, as a twelve-year-old, after she had finally been accepted into the Tata Archery Academy. It is here that Kumari began training with professional equipment and honing her skills.

Her first medal followed soon after, as she became just the second Indian to take home the Major International title of the Recurve Champion at the 2009 Archery World Cadet Championship afte Palton Hansda won the junior compound competition at the 2006 Archery World Cup in Mérida, Mexico

Deepika Kumari finally announced her arrival in front of the world in spectacular fashion. She took home two Gold medals at the 2010 Commonwealth Games, which were being hosted in New Delhi. 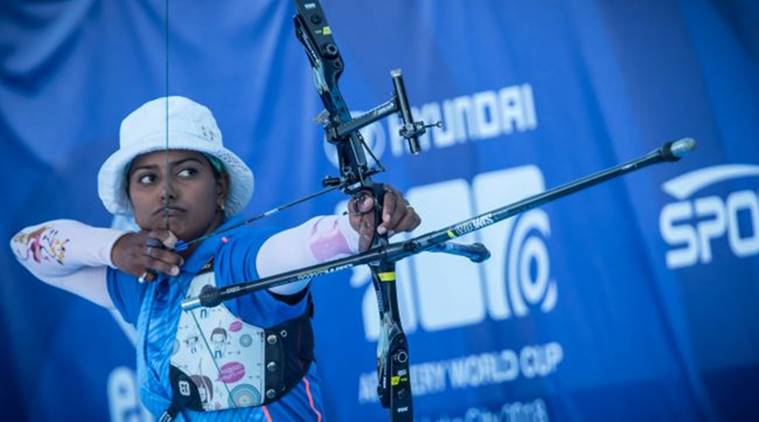 In the Recurve Individual category, Kumari defeated England's Alison Williamson by a score of six to nothing, to win her first Gold. She then teamed up with Dola Banerjee and Laishram Bombayala Devi to bag another Gold, this time in the team event.

This was just a glimpse of her genius. In the years that followed, Kumari quickly rose to the top.

Winning medals in World Cups and World Championships, Kumari soon found herself in a spot few Indians had been before- World number one. The sky had been the limit for Kumari, and she was amongst the clouds.

In a country where aspiring female athletes are given no place, Kumari carved out her own. Through grit and determination, Deepika Kumari fought her way to the top and inspired many others to do so.

As far as her legacy goes, at just 24-years-old, Kumari has won more than most athletes. In fact, such has been her contribution to the field of archery that she has been a part of every Women's Recurve medal India has ever won.

​However, as history has been evident, every top athlete has to face excruciating trials at some point in their life. Kumari had to go through the same, the first of which happened in 2013.

At a felicitation function for Kumari and her teammates, who had just won the Gold medal in Poland, were reduced to tears by the electronic media present. Wanting a 'bite' from India's newest sporting sensation, the media hounded Kumari and her teammates. The situation escalated to a sore point with some even going to the extent of labeling them arrogant if they refused an exclusive.

​The whole event had no doubt left Kumari shaken. However, with no time to spare, Kumari kept her head down and continued preparations for the Olympics.

People's expectations had risen when she started winning medals. Kumari was no longer just another athlete, she was one of the best ones and everybody wanted a medal from her. As a result, her no-show during the Olympics proved to be fatal.

Kumari failed to win a medal, or even mount a serious challenge, in either of the two Olympic Games she was a part of and once again faced immense scrutiny.

Slowly but surely, we started erasing Deepika Kumari's achievements from our memory. What Kumari had accomplished over the years, what she had sacrificed over the years was no longer important to us. Shamefully, we titled one of the most important athletes in the history of India as just another one.

However, Kumari had fought this sort of negativity all her life. After all, she is trying to ply her trade in a country where women are kept in chains, restricted from achieving what they can achieve. Long before Kumari was shooting down opponents, she was shooting down this mentality. She had proven her doubters wrong once and I believe it would be fatal to doubt her again.

Therefore, Deepika Kumari's win on a calm Monday morning was special. It proved that India's most important archer was as good as ever. It proved that she was ready to shoot down her doubters yet again.

A win for Recurve Archery

The win was important for Kumari. For Recurve Archery, even more so. The sport had stagnated in India for the last few years, falling behind its Compound counterpart. When Kumari shot her winning arrow on Monday morning, she imbued hope not only in herself but the whole of Recurve Archery team.

India's most important archer now faces the most important stretch of her career- the road to the 2020 Olympics and beyond. Kumari will once again bid to bag that one medal which has eluded her for years. However, over the years Kumari has shown that if you persist enough, you will reach your ultimate destination.

If indeed there was a little girl watching her hero shoot down targets, I do hope she acquires Kumari's perseverance, more than anything else.
Archery Deepika Kumari Recurve Archery
Latest Videos
Next Story
Similar Posts
X
X