Davis Cup Qualifiers: India can ride on the positives to upset Italy

Walking back in the corridors of time, almost thirty-four years ago, in 1985, veterans Vijay Amritraj and Ramesh Krishnan had scripted scintillating wins in their singles rubbers when India played Italy in the Davis Cup World Group First Round that took place in Calcutta.

Their thrilling victories had seen the Nation winning the tie 3-2  in March that year. In almost a similar scenario, with the same venue and the same green grass, it is time to find out if India can do an encore yet again as they are all set to host the same opponents, albeit, this time in the qualifiers instead of the World Group.

What lends India, three-time Davis Cup runners up, an upper hand in the impending clash is Rohan Bopanna’s experience on grass and also Ramkumar Ramanathan’s heroics at Newport when he made it to the Final of an ATP event for the very first time. India’s top ranked Prajnesh Gunneswaran also feels confident about dishing out a sumptuous show of stellar tennis while riding on his brilliant form from the last season. The warm support of a home crowd, a shortened new format to best of three sets and a favorable surface should also act as catalysts for the elusive win over the Italian visitors.

So, the blockbuster Friday is almost upon us. The grass at the South Club Kolkata that is hosting the competition after 16 years will again witness its very own gladiators slug it out in the Davis Cup qualifiers to be held on the 1st and 2nd of February where India will take on Italy for a sixth time. Last time South Club Kolkata  hosted the tie was in 2003 Asia/Oceania Group I Round 2 against New Zealand and India winning it 4-1. The revamped team competition will have qualifiers across different venues around the globe with 24 nations fighting it out for a ticket into the 18-nation World Final in Madrid this year. The 12 spots are up for grabs with six nations already into the Final fray.

Not having made it into the elite World group since 2011, India faces an uphill task once again to topple the visitors who already boast of a winning head-to-head against the Indians. Having won on all four occasions, 1928, 1952,1958 and 1998, the Italians have managed to get the better of team India often. The solitary win that came as an emollient for India was back in 1985 in the World Group Round 1 with India winning it 3-2 over the Italians.

The Italians, winners of the Davis Cup once in 1976, have won three out of five ties against Indians on clay and only one on grass which clearly suggests the supreme clay courtiers that the visitors are. Their only win on grass against India came in the Inter zonal round 1 in Brisbane in 1952 where they registered a 3-2 win over the Indians.

While taking advantage of the fact that the Italians prefer hard  courts over grass, India’s non-playing Davis Cup captain, Mahesh Bhupathi chose grass as the surface that could best be a winning formula against an otherwise strong Italian team. Bhupathi believes that having a venue of our choice, there should be no excuses going into the tournament.

“We definitely felt that this is our best chance to beat Italy on grass and not on hard or clay because of their strengths. So we have got the grass now and I  don’t think there is any room for excuses,” Bhupathi was quoted saying at the pre draw press conference on wednesday.

Also read: Leander should have been in the mix for Davis Cup, says Mahesh Bhupathi

While on paper, the visitor team weighs heavy, India as hosts have a few advantages that can help them qualify for the World Finals. We list down the positives that can see us through this Davis tie.

Prajnesh Gunneswaran has the weapons and experience to pull an upset: Last April, when India was locked 2-2 in their Asia/Oceania Group I tie against China, Captain Bhupathi fielded Prajnesh Gunneswaran instead of Sumit Nagal to play the decisive fifth rubber against Chinese teen sensation Wu Yibing. It was that time, a star was born as Gunneswaran ousted the Chinese  to give India a miraculous 3-2 win to proceed to the World Group playoffs.

Indian Davis Cup coach Zeeshan Ali was quoted saying that it was a career defining moment for Prajnesh from where he picked up momentum to script one of the most successful years of his career till date. "That was a changing point in his career. He had the belief in himself that he could win the fifth match and Mahesh and me saw the fire in him. Hence we decided to let him play the fifth match," Ali was recently quoted in a report.

Prajnesh, who proved his mettle by winning in those tough conditions in Tianjin without having ever played a Davis Cup tie before became a hero for the country and rose to the status of a saviour in that must-win tie against China.

29-year-old Gunneswaran then went on to pick up his first career top 50 win when he beat World no 23 Denis Shapovalov on grass in the opening round of the Stuttgart Open, an ATP 250 event in June last year. The southpaw from Chennai has a blistering forehand and a huge serve that helps him wade ahead on the tour.

Having won two challenger titles in 2018 and now perched at a career high ranking of 102, Gunneswaran is in the form of his life. The country’s top ranked singles player, Prajnesh will play his fourth tie of the Davis Cup when he begins tomorrow against World No 53, 22-year-old debutant Matteo Berrettini in the singles rubber. The Italian however has won their only previous meeting on the tour when he toppled Prajnesh 6-3 6-4 in Chengdu last year. On saturday, Gunneswaran will clash in the reverse singles against 34 year old World No 37 Andreas Seppi.

But rankings apart, if Gunneswaran who is also beaming with confidence from his maiden Grand Slam debut in Melbourne can ride on his form till now, backed by the support of a home crowd, an upset can most certainly be sensed. Also the new format with best of three sets instead of traditional five sets, gives Indians an edge with lesser room for fatigue from the gruelling long matches.

Ramkumar Ramanathan can deliver some amazing results on grass again like he did at Rhode Island. India’s second ranked Ramkumar Ramanathan made history last year when he reached the Finals of an ATP event at Newport, a grass court 250 tournament. He became the first Indian since Somdev Devvarman made it to the final in Johannesburg in 2011. Ramanathan had breezed through to the Final with some brilliant net play and huge serves. Although he lost to the American Steve Johnson in the summit clash,  the 24 year old Chennai star proved, that he can do some damage on grass too.

Although Ramkumar Ramanathan has not played on grass since the Newport Final, he does have the ability to bring his A game to demolish the Italians on home ground. Also a sense of patriotism when playing for the country should do the trick. After having a disappointing Asian Games experience where he had lost to a much lower ranked opponent Karimov Djurabeck in the pre quarter finals, Ramanathan will leave no stone unturned to make up and give the country a much needed win this time in the Davis Cup qualifiers.

Ramanathan is scheduled to play Andreas Seppi in the Rubber 1 tomorrow. The Italian has three ATP singles titles to his resume and Ramanathan will have to put his best foot forward to create an upset on day 1 if India has to stand a chance against the formidable Italians.

Rohan Bopanna and Divij Sharan make for a winning pair

India’s two top ranked doubles players, Rohan Bopanna and Divij Sharan who are playing as a pair since they won the Asian Games Gold medal are also in great form. Having won the Tata Open Maharashtra, the all Indian duo has begun the year on a winning note. Traditionally India has always been stronger in the doubles rubbers and this time too it shall be a monumental responsibility on the shoulders of both Bopanna and Sharan to give the country an edge with their wins in the doubles rubbers. 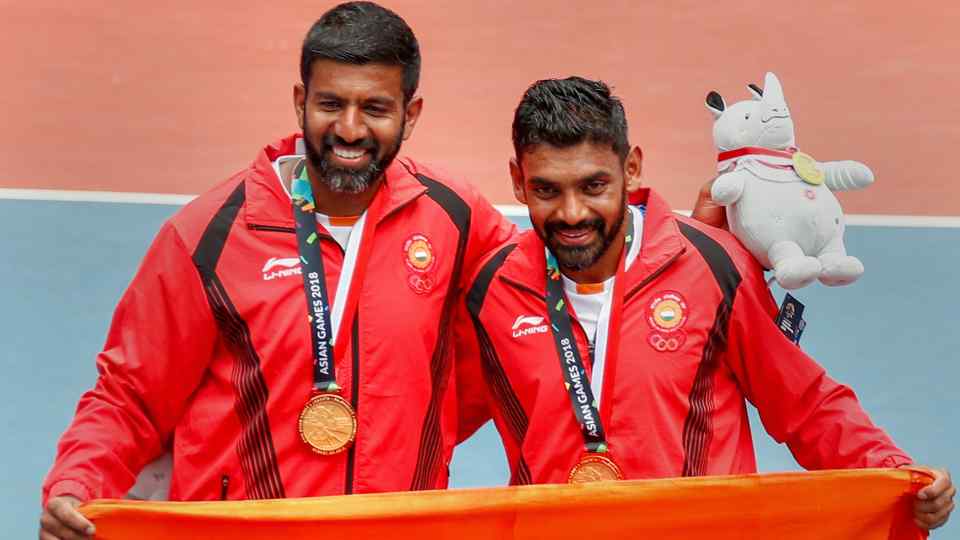 India’s two top ranked doubles players, Rohan Bopanna and Divij Sharan who are playing as a pair since they won the Asian Games Gold medal are also in great form.

Bopanna, former World no 3, who is a seasoned camper on the ATP doubles is well versed with grass. The Indian combine will face the very daunting Simone Bolelli and Marco Cecchinato in the doubles rubber on February 2 which is the second day of the tie.

Bolelli, 33, who was a former top 10 in doubles has a Grand Slam doubles title in his kitty. The Italian has the Australian Open trophy decorated in his cabinet which he won in 2015 with the ever fiery Fabio Fognini who has opted out from this Davis Cup tie.

26 year old World no 19, Marco Cecchinato who is basically a singles player and who famously beat World No 1 Novak Djokovic in the quarterfinals of the French Open,  be playing the doubles rubber alongside Bolelli and it shall be interesting to see if our veterans Bopanna and Sharan rise up to the challenge. Non playing Italian captain, Corrado Barazzutti has decided to keep out their top ranked singles player, Cecchinato  from the singles rubbers and instead fielded him for the doubles rubber.

The comfort of home ground with a favorable surface and a shortened format to keep fatigue at bay, should all together add up and help India qualify for the Final of the Davis Cup in Madrid this year.